The former WBC super-bantamweight winner to face Zimbabwean challenger after the fight was upgraded.

The eight round fight was initially a friendly bout to prepare the two boxers for their different international professional exploits. But now one of the two fighters has an opportunity to be a world champion after the bout was upgraded.

Since losing the world title to Mexican Yamileth Mercado last year, Zarika had taken a low profile, a situation not helped by the Covid-19 pandemic.

Zarika, who has since shifted her base from Nairobi to the United Arab Emirates where she works as a gym instructor, landed in Dar es Salaam on Wednesday and was welcomed by the fight promoter Kevin Twisa — the Director of Jackson Group which is sponsoring the fight.

Besides clinching the title, Zarika hopes to use the fight to gauge her speed and strength with an eye on a rematch with Mercado.

Yesterday, Kenya Professional Boxing Commission Secretary General Franklin Imbenzi said they had given Zarika the nod to carry on with the fight against the Zimbabwean.

“This is the right forum for her (Zarika) to improve on her fitness levels after a long lay-off in readiness for future professional matches,” Imbenzi told Standard Sports. This march will be a curtain raiser to the main encounter pitting Hassan Mwakinyo of Tanzania against Jose Cadlos Paz of Argentina in a World Boxing Federation super welterweight 12-round fight. 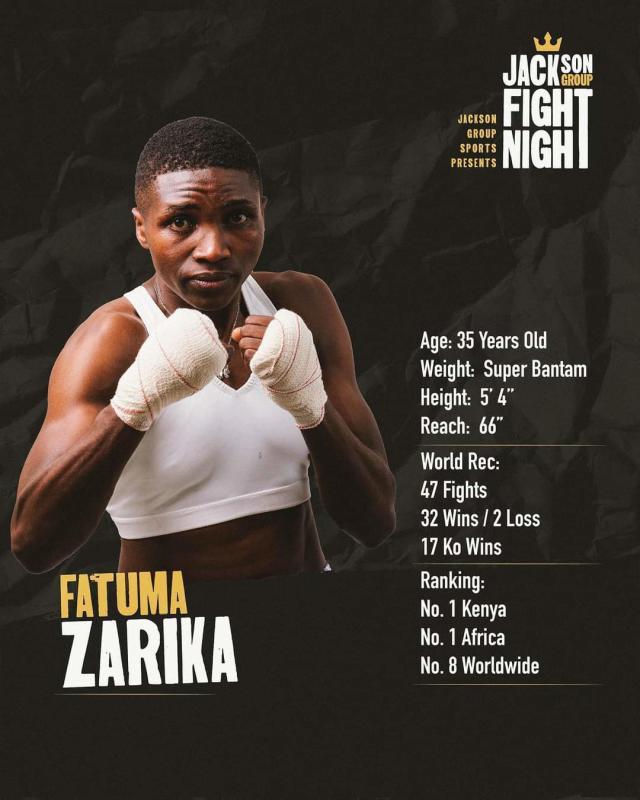 Eight boxers from Kenya, hosts Tanzania, Zimbabwe, Argentina and Democratic Republic of Congo will grace the occasion in different matches in curtain raisers for the main match. The third match will see Tanzanian Zulfa Tusuf going against Alice Mbewe of Zimbabwe in a six round female flyweight bout.

In another match, Hussein Itaba of Tanzania takes on Alex Kabangu of Democratic Republic of Congo in a 10-round super middleweight fight. Yesterday, Twisa said they will continue to invite more partners from around the globe and transform boxing while getting value for their business through the sport just like other disciplines.