It’s strange how fortunes can conspire against human beings. Childhood dreams are always fuelled in school – with the hope of achieving successful careers.

But some top Kenyan athletes defied the rulebook. They worked hard in school, nursed huge career dreams and hoped to excel in academics. But, oops! Their lofty ambitions crash-landed just before takeoff.

Brave and determined as they exhibit on the tracks and roads, they were not heart-broken. They simply made an obtuse thought: picked up athletics and ascended to the global stage like it was tailor-made for them.

And that clearly captures memories of Kenya’s greatest athletes who harboured big childhood academic dreams that never came to pass.

Here Standard Sports shares a ledger of Kenya’s greatest athletes who did not realise their childhood career dreams, but earned solace in athletics.

Her glass hour figure and the bobbing pony tail – her hairstyle – remained her distinctive feature for the last two decades.

But her giant strides to the pinnacle of world distance running began in 1999 when she made the national team to the World Youth Championships in Bydgoszcz, Poland. And she never disappointed.

Her track exploits in the past two decades were well supplemented by her long strides. But she still adores her childhood career desires.

“After Form Four, I wanted to become a nurse. I really admired the profession. I like helping people. When you are a doctor or a nurse, you meet so many people and encounter challenges in life. That’s what makes me remain in constant touch with children, high school students and the entire community,” said Jepkosgei, an Inspector of Police based at Mwingi Police Station, in Kitui.

Whether by design or default, Jepkosgei was recruited into the National Police Service.

“By enlisting in the National Police Service, I got the opportunity to help talented athletes into the job,” said Jepkosgei.

She is a prodigious talent, who has earned her place in the genuine pantheon of world’s 800m superstars in the 21st century. Mozambique’s Maria Mutola, South Africa’s Caster Semenya and 2008 Olympic champion Pamela Jelimo rivaled her. No one else is on the zip.

He qualified to join university but opted to concentrate on athletics. While at Chebara Secondary School in Elgeyo Marakwet, Kiplagat was a footballer (striker).

Inspired by his rural home neighbour in marathoner Sammy Kitwara, the determined Kiplagat gave athletics a shot. His meteoric rise saw him earn a slot in the national team.

At the New Delhi Commonwealth Games in 2010, Silas Kiplagat won the 1,500m gold medal. Before then, he could not attract more than a passing glance.

All along, Kiplagat had a career ambition of becoming a nurse.

“After Form Four, I got an admission letter to join Kenya Medical Training College in Nairobi. By that time, I had started training alongside Kitwara and had a lot of hope that I could excel in athletics. I decided not to report to college. Luckily, I made the team for the Commonwealth Games in 2010,” said Kiplagat, an Inspector of Prisons at Ruiru Prisons Staff College.

The heights continue to soar high, yet the scream remains familiar. When Julius Yego stands at the end of the pitch, staring up as spectators give hearty claps from the stands, the 2016 Olympic javelin silver medallist boils to a task of ultimate sophistication down to sheer simplicity.

At the 2015 World Championships in Beijing, he won the gold medal–days after setting the Africa record of 92.72m in Birmingham, the fourth longest throw in history. That’s when his scream was louder.

The joy of that scream on the pitch— the ecstatic feeling one gets after achieving the impossible, the sense of pride and emotion after a brilliant display— tells a lot about Yego’s struggle to excel in a field event, despite coming from a region endowed with track superstars.

Not bad for a man who played football while a student at Kapsabet Boys High School before trying his hand in javelin.

“I wanted to be a lawyer. But I am happy to have made a name in sports. I studied Public Policy and that’s why most people believe I am a politician from the way I look at issues,” said Yego.

For Kamworor, he had an unbridled love for athletics from his childhood but haboured no interest in full-time athletics.

He did not look outside his village for inspiration –he comes from a region with a rich athletics pedigree in 5,000m and 10,000m.

As a young boy, Kamworor could sneak away from home during weekends to the nearby athletics-rich Kapkenda Girls High School, where he peeped through the live fence to watch athletics world beaters training.

Edna Kiplagat has competed in all six World Marathon Majors (WMM) series, twice at the World Championships and the Olympic Games –a feat no athlete on the planet has achieved.

Edna says she gave up football for running after her games teacher at Kipsoen Secondary School advised her to try her luck in athletics. By then, she harboured little interest in athletics though she loved football.

“I loved teaching. It’s a good job. But I am happy with what I have achieved in athletics,” she said.

Nixon Chepseba is among a handful of Kenyan runners who braved harsh climatic conditions in the rough terrains of Kerio Valley.

Chepseba also forms part of the elite club of athletic greats from St Patrick’s High School Iten who have made Kenya’s Olympic squad since 1972 in Munich Germany.

He was also a volleyball player who led the school team up to nationals.

Next article
Premium
How Kenyans wow the world at finish line 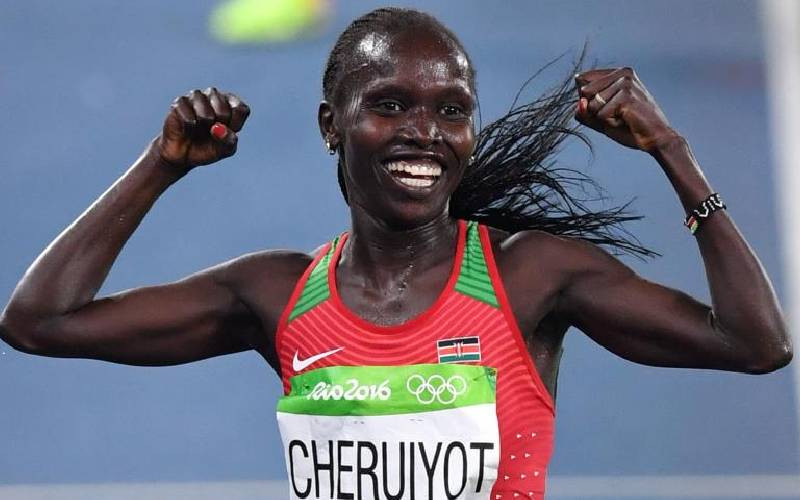