After missing out on gold at the past two World Championships, Kenya is back on top in men’s 800m.
Olympic champion Emmanuel Korir charged into the lead on the final straight and powered to his first world title at the World Athletics Championships yesterday morning at Eugene’s Hayward Field.

Korir produced a similar performance to the 2020 Tokyo Olympics, he spread his arms wide as he crossed the line to victory in men’s 800m as if to announce that he was ready to assume David Rudisha's mantle as king of the two-laps event.

The American-based Korir surged past Canada’s Marco Arop with about 50 metres to go and, with his head bobbing, crossed the line in a season’s best of 1:43.71. Algeria’s Djamel Sedjati closed fast to finish second in 1:44.14, with Arop holding on for third in 1:44.28.

“It was tough,” Korir said. “I was expecting a faster race, but I won and I am very happy with this result. I knew there were some guys close behind me in the last 100m. I was expecting someone to come, but no one did.”

The 27-year-old Korir re-established Kenyan dominance in the two-lap event, becoming the first athlete from Kenya to win the title since world record-holder Rudisha captured his second world crown in 2015.

Kenyans have won gold in the 800m at the past four Olympic Games, but the past four world titles had been claimed by athletes from four different nations. Korir’s victory means the world title has now been won seven times by Kenyan athletes.
Yesterday’s race had been considered wide open, but Korir showed the experience, tactical prowess and well-timed kick to come out on top on the penultimate day of the championships.

Korir, who entered the championships on a wildcard as the 2021 Diamond League winner, had not been able to control races this year as he did at the Tokyo Olympics and had not run under 1:45 all season. But he rose to the occasion at Hayward Field, the track where he won the NCAA title in 2017.

Once again, no two athletes from the same country made the podium, continuing a streak that started with the inaugural edition in 1983. The men’s 800m is the only event at the World Championships where that has occurred.

Sedjati, who ran 1:43.69 in April and won the Mediterranean Games title on home soil earlier this month, became the first Algerian to take a world medal in this event since Djabir Said-Guerni in 2003.

Arop became the second Canadian to win a medal in the event and the first since Gary Reed earned silver in 2007.
Emmanuel Wanyonyi, the world U20 champion, who turns 18 on August 1, finished fourth in 1:44.54. Wanyonyi, who is coached by former 800m champion Janeth Jepkosgey, fell just short of becoming the youngest men’s world 800m medallist.

“My race was good, very tough and I did my best,” he said. “There's time for everything. My time is not now but it will come.” 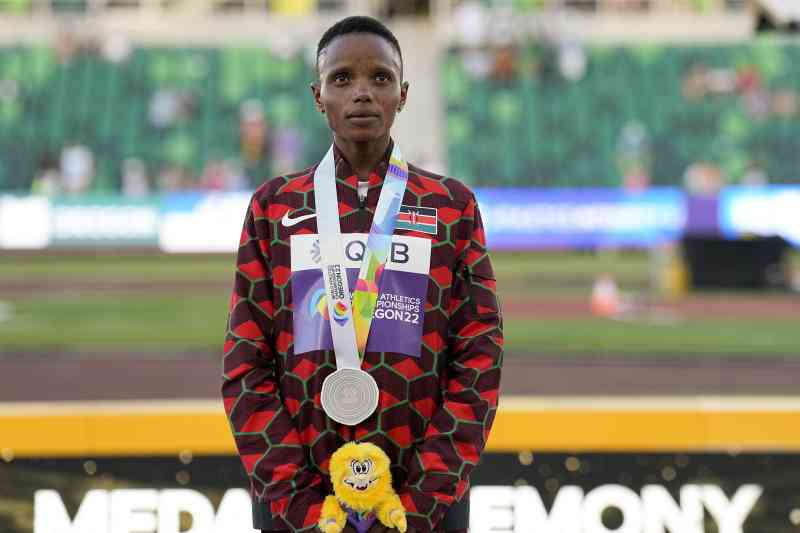