Family of woman in Saudi Arabia cry for help 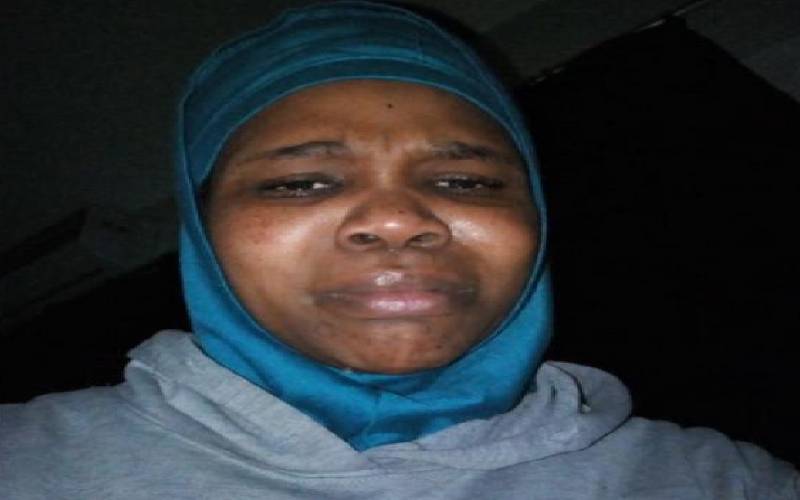 Rebecca Chesang', 30, was working in a restaurant in Eldoret town until February last year when she got an opportunity to work in Saudi Arabia.

Chesang'(pictured), who comes from Kapkenyeloi village in Nandi County, was introduced to an employment agency linking potential domestic workers to other agencies in Saudi Arabia, and she signed a deal. However, it has brought her nothing but pain and anguish.

For the last month, she has been crying for help to be evacuated from the Gulf nation after her employer allegedly started mistreating her.

Things turned even uglier for Chesang' after her employer, who has 11 children, took the molestation a notch higher, according to the domestic worker.

“They (the couple) have inserted some objects in my private parts and I am in great pain. The woman of the house hit me on the leg, accusing me of delaying to complete some house chores on time. I am calling for help from the Government of Kenya,” she said in a distress call to this writer from Arar town, Saudi Arabia.

In Nandi, her family led by her mother Rhoda Jemeli is distraught.

They have had sleepless nights for the last month after their daughter revealed what she was going through.

Jemeli says her daughter’s trip to Saudi Arabia was unclear and that she only discovered months later that she was in the Arabian country.

Things worsened after she stopped picking calls from the family, only choosing to share a photo of her injuries.

“She initially told her aunt in Nairobi that she was heading to Australia for an academic scholarship. I was later surprised to learn that she was in Saudi Arabia all along,” the agonised mother said.

She continued: “My daughter’s trip appears like a human trafficking scheme. I forgive my daughter for lying to us about her trip, but I call for help to bring her back.”

The mother says her daughter was mistreated by her first employer whom she served for six months before switching to another family that was more cruel.

“They threatened to throw my daughter out of the home by Sunday (yesterday). I don't know where she is and how her condition is now. I am worried because she has stopped picking calls,” she says.

Speaking to The Standard three days ago, Chesang' claimed the agency which took her to Saudi Arabia had promised her a job in Australia only for her to end up in Saudi Arabia.

Chesang' said the agency has also stopped picking her calls.

A relative, Doris Jepkurui, said Chesang' has been sending her audio recordings crying for help.

“We are calling on the Kenyan government to help her return home. She lives in Arar, which is far from Riyadh, where we are told Kenya has an embassy,” she says.

Jepkurui said they called a Ms Grace, the director of the agency, pretending to be seeking employment in the Gulf country, but she said the firm only connects job seekers to employers and can’t be held responsible for the employees’ woes.

“As soon as you are there, the responsibility of your welfare rests on the employer,” she said.

Grace said she was not aware of Chesang’s case since the agency connects hundreds of young women to job opportunities in Saudi Arabia.

Previous article
Kenya, poor nations to get jab from India
Next article
Jubilee to expel rebels after Wahome attack