Night of drama as police camp in MP Sudi’s home, fail to arrest him 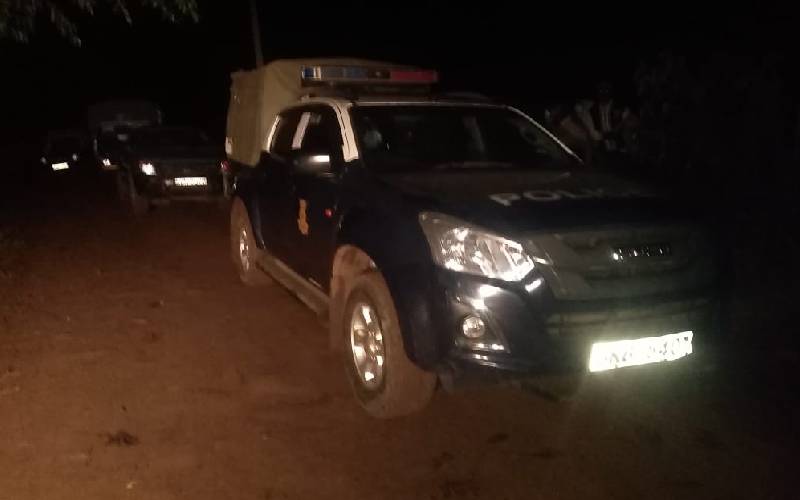 After four hours, police finally managed to break into the home of Kapseret MP on Saturday morning but failed to arrest him.

The heavily armed police eventually broke into the residence in the wee hours of today morning, but could not find the MP.

On Friday night, irate residents blocked the road leading to Sudi's home with logs, stones and tractors to stop police from accessing the controversial lawmaker's compound.

Tension was high at the residence of Kapseret MP Oscar Sudi as tens of police officers barricaded his home in an attempt to arrest him.

A contingent of police officers including the dreaded GSU who raided Sudi’s house yesterday had to wait at the gate for several hours before shattering the gate's lock at 3am to gain access into the residence.

Sudi, however, managed to escape the dragnet leaving behind hundreds of police officers who ransacked the house for hours.

Though senior police officers involved in the operation have not revealed the exact reason he was being sought, it is believed his anti-First Family utterances last week put him in police radar.

On Friday, he led a group of youth in a demonstration along streets of Eldoret town where he chided the police for stocking him for days.

“If you want to arrest me, just call me on the telephone and I will come over. You do not need to send 100 officers to surround my home,” said Sudi told locals.

He also alleged that detectives were around his home on Thursday night though he was not arrested.

At the residence of the MP, all the lights were switched off as senior police officers pleaded with MP to surrender.

The home was literally dark with locals screaming and daring to shoot police with poisoned arrows.

Supporters of the MP wondered why the police failed to arrest the legislator during the day but Uasin Gishu police commander Johnstone Ipara leading the operation was reportedly under instructions to ensure the lawmaker is arrested at night.

Sudi’s lawyer Isaac Terer while addressing the press outside his home on Friday night pleaded with the officers to conduct the arrest in the morning, saying tension has gripped the area.

“There is serious tension here which might lead to a breach of peace. We are asking police officers here to do this arrest in the morning,” Terer Said.

He criticised the actions taken by the security officers even when the lawmaker had expressed willingness to be interrogated over his utterances.

“We are asking the independent institutions to act independently and in a civil manner. We are able to submit Sudi any time but not at night,” he added.

He added, “Sudi is willing to abide by the law. Why should we have the police manning his compound? It’s not necessary. I don’t want to read politics but the police should act in a civil manner.”

Cheptiret/Kipchabo MCA Gilbert Tenai criticised the action by police officers to target the lawmaker while with his family and added that Sudi is willing to report to any police station as required.

Sudi on Friday made a triumphant entry in Eldoret town despite a slur against President Uhuru Kenyatta and his family hanging on his neck.

Locals claim three people including the MP’s brother and an uncle are currently admitted in hospital undergoing treatment for gunshot wounds.

They accused the police of terrorising them the entire night.

Police also unsuccessfully raided the MP’s house at the Elgon view estate but did not find him.

Susan Mutai, a local said they never slept in the night.

"This was like a military zone last night, we endured suffering in the hands of police who beat anyone they met within the neighbourhood. It was wrong to raid the house. None of us slept in the houses because of gunshot and screams," she said.

Philip Songony, a Kapseret resident, faulted the government over the night raids, saying it was unnecessary.

"Gunshots were allover, we did not know what was happening. It is wrong for the government to subject innocent locals to untold suffering," he said.

"This government is inflicting untold suffering to the locals. Many people were arrested for no apparent reason. Why bring hundreds of police officers to arrest one person," he said.

When Standard Digital visited the homestead locals milled at the gate with blood splattered on the ground and bullet marks doting the gate.

Despite the police leaving the area, tension is still high.