Pandemic decimates livelihoods of the Maasai

For more than 50 years, Loiman Letolo, 70, has peddled her colourful beaded necklaces and bracelets to safari-goers at the entrance gates to Kenya's Maasai Mara National Reserve.

As the annual "Great Migration" of millions of wildebeest, zebras and gazelles into the Mara's vast savannah gets underway, Letolo would normally be earning $50 a day from the droves of  binocular-wielding tourists in their open-top jeeps.

The COVID-19 pandemic has, however, put a stop to that.

Instead, the grandmother of eight - wrapped in a vivid red "shuka", or shawl, and wearing a face mask - queues with scores of women as community elders dole out rations of maize flour, beans and sugar bought with funds raised from well-wishers.

"I've been selling at the roadside since I was a teenager. In all my life, it has never been like this. There have always been tourists," said Letolo, at the Nashulai Maasai Conservancy,  a few kilometres from the Maasai Mara's Sekenani gate.

"Now there are no tourists, there is no dollar and there is no food. If we didn't get these weekly handouts, we would not be able to eat."

The coronavirus has crushed Kenya's billion-dollar tourism industry, leaving tens of thousands of people from one of Africa's most recognisable tribes - the Maasai - struggling to survive.

This has raised fears amongst some conservationists that without government support or other livelihood opportunities, desperate communities living around protected areas may stop protecting wildlife, resort to poaching to get by, or sell land.

Semi-nomadic cattle, sheep and goat herders, Maasai communities around the Mara have for years relied on money from the hordes of foreigners with zoom lens cameras, eager to capture the greatest movement of animals on the planet.

As shareholders in private conservancies - community-run protected wildlife areas - the tourist dollars earned from lodge and camp stays, game drives, village tours and handicrafts during the high season from July to October are vital. 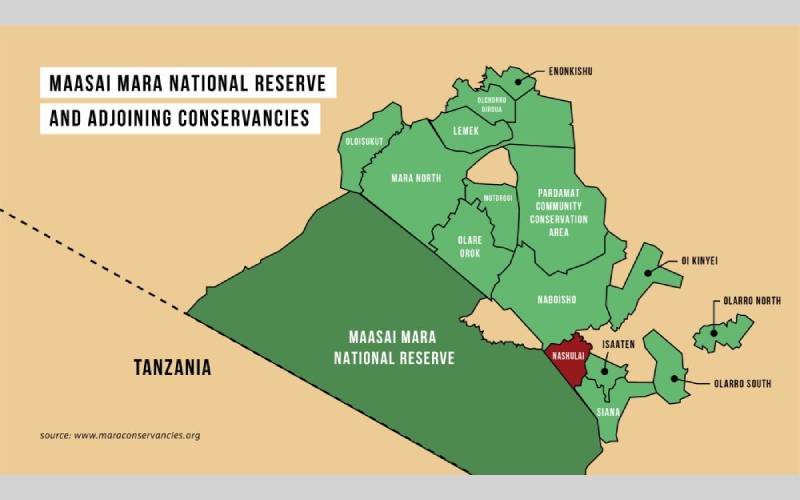 There are 15 conservancies around the Mara, collectively providing benefitting more than 100,000 people through land lease payments, as well as salaried jobs such as rangers, tour guides, housekeeping staff and drivers.

Nelson Ole Reiyia, founder of the Nashulai Maasai Conservancy - a 20 square km (5,000 acre) protected area on the Mara's eastern boundary about six times the size of New York's Central Park - said the fallout from the pandemic has ravaged the lives of the 2,000 people in the conservancy.

"This is usually the busiest time of the year. Our lodge was fully booked, but then COVID-19 happened and almost overnight the bookings were cancelled," said Reiyia, sitting amid the empty tables and chairs in the mess tent of his camp.

"The coronavirus has decimated the local economy. No one in the community has been spared. People were staring starvation in the face, so we started crowdsourcing for funds to provide weekly food aid, but even that is not sustainable."

Reiyia said he had been forced to furlough 40 of his 100 workers - mostly housekeeping staff - and also cut salaries for some senior rangers who patrol the conservancy which teems with giraffes and zebra alongside Maasai herders with their cattle.

‘Except for the animals, it’s empty’

The tourism sector is a vital economic pillar, providing more than two million people with jobs and accounting for about 10% of the east African nation's gross domestic product.

But the pandemic has seen the industry slump to its lowest level in decades. The government has so far estimated losses of at least 80 billion Kenyan Shillings ($752 million) - almost half of last year's total revenue.

Nowhere is this more evident than at Kenya's most popular tourist attraction: the Maasai Mara.

Covering 1,510 square km (373,129 acres) - about twice as large as Singapore - the Mara reaches its pinnacle every July and August when the majestic stampede of wildebeest migrate from Tanzania's Serengeti National Park to find greener pastures.

Tens of thousands of visitors flock here annually, hoping to witness the hordes of wildebeest that run the gauntlet of hungry Nile crocodiles as they cross the Mara river, or sight a pride of lions lying under the shade of an acacia tree.

This year, however, there are few spectators.

"Except for the animals, it's empty," said Cosmas Saruni Ole Koshal, a Nashulai conservancy tour guide and driver, as he drove his jeep along a bumpy track past some eland and topi grazing in the Mara's grassland.

"Normally, there are so many jeeps and minibuses on the tracks of the Mara at this time of year. We would be hearing the long-range radio going off every minute with guides sharing lion sightings, but these days the radiowaves are silent."

The lack of tourists in the reserve means there are few taking breaks between dawn and dusk game drives to visit the mud-and-thatch Maasai manyattas, or villages, which are scattered around the Mara.

A manyatta - where visitors can participate in a Maasai warrior jumping dance, learn to make fire, visit a homestead and purchase curios ranging from spears to wide-collared beaded necklaces - can earn hundreds of dollars daily in the peak season.

At Ewang'an manyatta, a branch-fenced settlement comprising of 24 homesteads located a few minutes drive from the Mara, villagers worry about the future.

"We would normally be getting 40 to 50 tourists every day paying an entrance fee of $30 each. We use this money to support the education and health needs of the community," said Jack Moniko, an elder from Ewang'an, with a population of about 159.

"But these days we are worried, there are no daily earnings. We don't know what will happen with this virus and when the tourists will return. Some people say even next year they might not come."

Residents said their traditional livelihood of selling livestock had dried up with cattle markets and slaughterhouses closed due to COVID-19 restrictions.

Even if they could sell their animals, it wouldn't be worth it as the cost of a cow had plummeted to a third of usual price to 20,000 shillings due to the pandemic, they added.

Established to help landowners and livestock-keeping communities sustainably manage and conserve the wildlife and their habitat through tourist revenues, the Mara's conservancies are now under threat.

Collectively covering over 1,400 square kms - almost equivalent in size to the reserve - conservancy camps generate nearly $5 million in lease payments for some 14,200 landowners annually, according to the Maasai Mara Wildlife Conservancies Association.

But the pandemic has left most devoid of visitors, forcing the conservancies to withhold or make half payments to shareholders and furlough hundreds of tour guides, rangers and camp staff - most without pay.

Joseph Kosikir, 65, warden at Nashulai Maasai Conservancy, said he is luckier than most as he is still getting half his salary, adding many rangers and scouts from other conservancies had been sent home.

"I am in charge of 16 rangers and our job here is to protect both the community and the wildlife living here. We intervene to stop human-animal conflicts, seek out poachers and also protect the visitors who come to Nashulai," he said.

"But if this corona situation continues, and all the rangers have to stop working due to no pay, it could be very bad for everyone. There will be increased conflicts with animals."

Conservationists also fear desperate communities - which have for decades helped control deforestation and poaching - may be exploited by criminal gangs to poach animals to get by.

"The guys working in the lodges are jobless. The reserve and parks will lay off rangers," said Kaddu Sebunya, chief executive officer of the African Wildlife Foundation.

"These guys know the parks better than anyone else and we all know who will recruit them - the poachers."

But Reiyia said that is unlikely in the Mara.

"The Maasai culture has always been to protect the wildlife as we have relationship with the animals. We believe that if you kill an elephant it will come and haunt you as the elephant has the same spirit as a human," he said.

"My biggest fear is that Maasai landowners - who are not getting any revenues - may get fed up and sell off their land to for non-conservation purposes. This could lead to the destruction of the Mara and livelihoods of the Maasai."

Weekend @ One: US Senate passes bill to support War on poaching

For this reason, democratic institutions always seek to protect the rights of minority groups against the tyranny of the powerful majority.

By Stephen Rutto and Bakari Ang’ela | 1 day ago