The heavy rains experienced in Nakuru on Sunday afternoon have caused flash floods. A section of the Nairobi-Nakuru highway under the railway underpass is flooded and at least one vehicle was submerged. Motorists using the route were stranded after the railway underpass sections became impassable. The railway underpass is notorious with flooding with the county government struggling to carry out frequent maintenance to the drainage system that collects water from Menengai Crater in the north to Lake Nakuru. 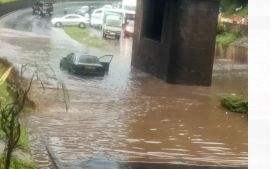 In 2018, a Matatu loaded with passengers was submerged at the railway underpass. One of the victims, a 17-year-old girl, was found unconscious and taken to Nakuru Nursing Home hospital where she died. During that incident, Governor Lee Kinyanjui promised to have elaborate sewer management and drainage plan to end the perennial flooding not only at the bridge but the town in general. Nakuru town has a dilapidated system that can't handle the pressure.