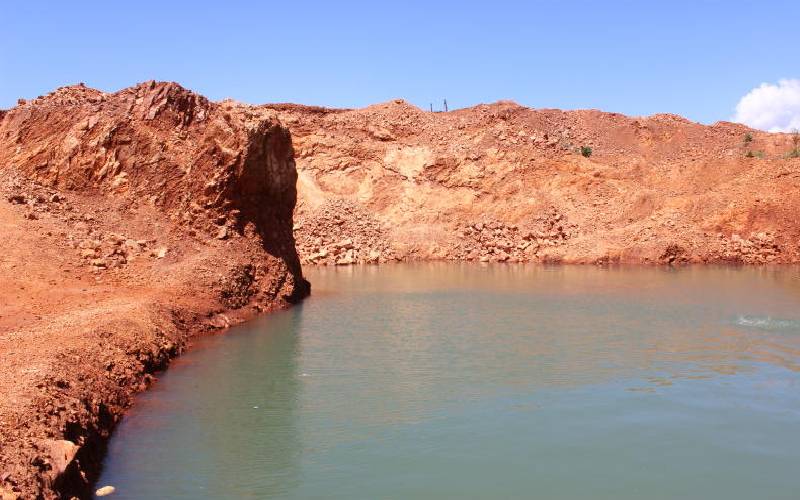 This year, five people have died after plunging into abandoned quarries in the two counties.

Two sets of brothers drowned in two different borrow pits that swelled after heavy rains pounded the region in a span of three days last month.

Angry locals are now accusing the state of watching as road contractors abandon quarries without covering them after excavation of murram, thereby exposing them to danger.

Eight people have drowned in abandoned quaries in the two counties since September last year.

Isaac Tamoo, a resident, said some pits have been left uncovered and unfenced for years.

“We were planning to bury the brothers who drowned when, shockingly, another two brothers drowned,” he said.

Area Chief Benjamin Chelulei said the quarry pit was supposed to be filled by a Chinese contractor after tarmacking Soy-Kabenes road but that has not been done after more than a year.

“We held a stakeholder meeting where it was agreed that contractors ought to refill quarries after extracting murram but the agreements have not been honoured,” Mr Chelulei said.

According to the chief, there are five abandoned borrow pits in Soy, Uasin Gishu.

Uasin Gishu County Commissioner Abdirisack Jaldesa yesterday said he has asked the National Environment Management Authority (Nema) to carry out an audit of all quarry pits and establish why road construction companies failed to cover them.

Keiyo North Deputy County Commissioner Julius Maiyo also said the state has directed Nema officials to audit the quarries and give a report.

Cerebral palsy will not stop me from thrilling you, DJ Wiwa promises fans

Rising against all odds, the internet sensation is attracting thousands only months after her biggest supporter, her mother, died