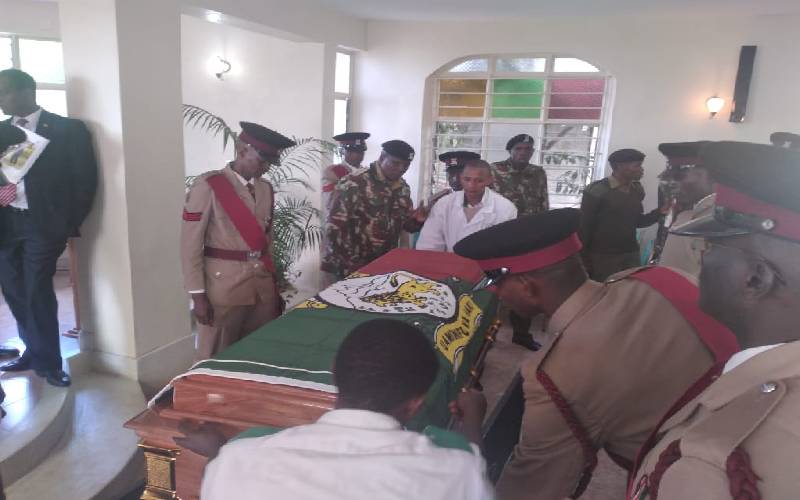 Mourners have already gathered at Chemasis village in Rongai, Nakuru county, to say goodbye to Sergeant Kipyegon Kenei, an AP officer who was murdered two weeks ago in Sh39 billion military equipment scandal.

Family members and political leaders of the slain officer, who worked at Deputy President William Ruto’s Harambee Annex office are, however calling for justice for the departed cop.

Speaking at Umash Funeral Home in Nakuru on Saturday morning, Kenei’s father John Chesang eulogised his son as hardworking young man who did not deserve to die.

He lauded the ongoing investigations into the killing led by Directorate of Criminal InvestigationS (DCI) boss George Kinoti, but challenged the investigators to arrest those behind the killing.

“We are happy with the investigations, but we feel his cellphone details could be very important in unraveling those behind his killing,” said Chesang.

Labour Cabinet Secretary Simon Chelugui described Kenei as an organised young man who brought everyone on board and was known among his peers as Kiongozi.

He called on DCI to stop the drama and instead tell the family who Kenei was talking to on phone as was captured in the CCTV footage released on Thursday by DCI.

He dismissed reports that Kenei committed suicide, saying he was not a coward and could not kill himself.

"Kenei could not commit suicide. He was not a coward to take his life. Let the DCI stop all the drama and tell us those murdered him,” he said.

Kinoti said Kenei was murdered, and his body secretly taken to his Imara Daima's house, where it was later found, with a pistol next to it, in a stage-managed suicide scene.

“We have evidence to show that he did not shoot himself,” Kinoti told the media, “this is case of cold murder. They killed him and tampered with the scene.”

While the DCI is yet to name or arrest any suspects even after releasing the CCTV footage from Harambee House Anex, Kinoti maintained that Kenei's killing is linked to the fake military equipment's scandal.

According to CCTV footage released by Kinoti, Kenei is the one who ushered in former Sports Cabinet Secretary Rashid Echesa, two foreigners and a fake army general to Ruto’s office, to cut the military equipment deal.

Kenei's body was transferred from Umash Funeral Home to their rural village in Rongai for burial this afternoon.

Previous article
FKF bosses should adhere to laws
Next article
Pregnancy made me hate my husband's voice, cooking

Biden presidency boost to the fight on climate change