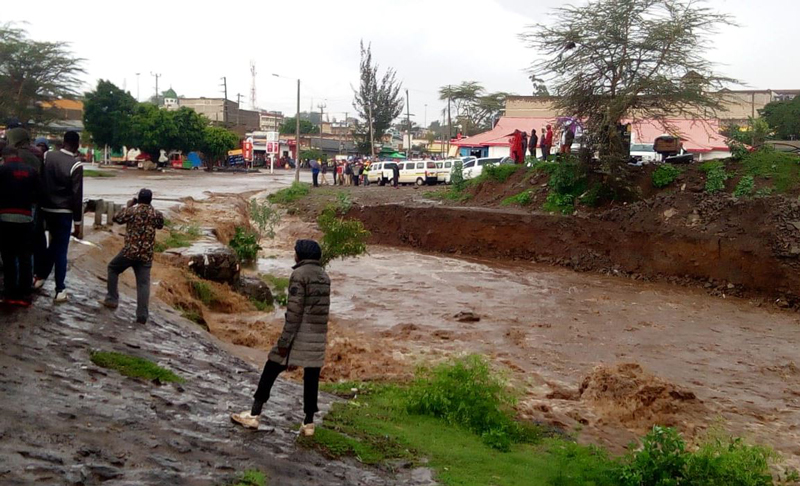 Activities in Narok town came to a standstill for about two hours after flash floods cut off transport at Enkare-Narok Bridge along the busy Narok-Bomet road following a heavy downpour.

Motorists plying the route were stuck at both sides of the road as the raging floodwaters cut across the road for about two hours.

Traders had to shut down their business premises at the central business district for fear of incurring losses and losing lives.

Patients seeking medication at the Narok Referral Hospital and those working at the government offices were also stranded since the floods rendered their movement impossible.

The comes barely a day after Narok Governor Samuel Tunai warned against the looming floods in the town as the rains continue to hit different parts of the country.

The weatherman has listed Narok among the counties that will receive heavy rains thus making it vulnerable to flooding.

Despite the drainage being built to avert the foods gobbling over Sh600 million, the flood menace seems far from over.

"We have seen about 52 Kenyans were killed by landslides in West Pokot and we fear the same can happen here as it has happened before. The government should clear the waterways by demolishing houses built on riparian areas as a matter of urgency," said Governor Tunai.

The traders at the town who were caught off guard also narrated how they had to quickly save their wares as the floods wreaked havoc in the town.

"I was still at my shop near the river when I heard some screams. On peeping out of the window I realize the floods were almost hitting my shop. I had to immediately close and run for my dear life," said Joe Kang'ethe, a trader.

He revealed that his business was also affected in the 2015 floods but since he had nowhere else to do his business hence he chose to stick there.

But one of the bodyguards remains with him most likely to prevent him from going back to the spot they had removed him from.

By Yvonne Chepkwony | 22 hours ago

By Ndiritu Muriithi | 23 hours ago