Pastoralists on 200km trek to save River Ewaso Nyiro 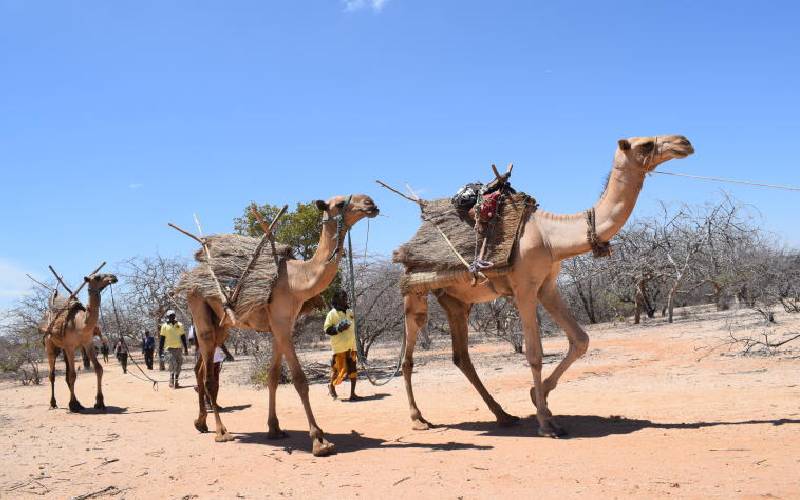 More than 200 pastoralists have embarked on a 200-kilometre six-day camel caravan to raise awareness on the importance of conserving River Ewaso Nyiro.

Volunteer youths will traverse Laikipia, Samburu and Isiolo counties where the river flows through.

The annual activity dubbed Ewaso Nyiro River camel caravan aims at creating awareness among locals on conservation of water, a source of livelihood to pastoralists.

The trek was flagged off on Sunday at Ewaso village in Laikipia County. Another group trekking from Bisan Biliqo, Barambate and Gotu markets in Isiolo County was flagged off yesterday.

The organisers say the caravan is also aimed at reducing perennial bloody conflicts among the pastoralist communities over water and pasture.

John Ole Tingoi from Non-Government Indigenous Movement for Peace Advancement and Conflict Transformation (IMPCAT), says water levels of River Ewaso Nyiro have gone down affecting pastoralists as it is the only river flowing into the arid northern Kenyan.

“There are many human activities along the river by different communities from the counties that depend on the river. We are engaging them in forums through the journey to encourage them to conserve the river,” said Tingoi.

The walk comes as pastoralists living downstream are opposed to one of the national government projects-construction of Crocodile Jaw mega dam-along the river on the boundary of Isiolo, Laikipia and Samburu arguing that it would affect the free flow of water.

River Ewaso Nyiro serves six counties with 3.6 million people depending on it for livestock and household water use. The river is fed by nearly 40 streams flowing from Mt Kenya and Aberdare forests.

Over the years, water levels of the river have gone down and for the past four years of advocacy for conservation and peaceful coexistence among the communities, Tingoi noted that residents have embraced the idea.

“We are keen at avoiding violent clashes among pastoralists in downstream counties which have been majorly been over water and pasture,” he said.

Lorian Swamp (where the river ends) is said to be a grave because of the deaths that have occurred there.

The participants will follow the river through different areas up to Archer’s Post in Samburu County where they will all converge on August 9.

The team from Laikipia will traverse through Ol Donyiro, Kipsing, West Gate and Kalama areas to the Post.

Participants in the caravan are drawn from Rendille, Maasai, Samburu, Borana and Somali communities who normally fight over pasture.

Other organisations involved in the caravan include Water Resources Authority (WRA), as well as Isiolo, Laikipia and Samburu county governments.

Tingoi cited Illegal and unregulated abstractions by small and large scale farmers as another major cause of decline in water flow to the semi-arid northern region.

“We are seeking to encourage dialogue between pastoralists and farmers for equitable sharing of the water,” he added.

Bonnie Pashulan a resident of Waso and a camel handler in the trek regretted that perennial conflicts over natural resources have seen hundreds of pastoralists die.

“There was drought last year and the more we get involved as communities, the more people are getting veered off from abstraction,” said Pashulan.

This year’s theme is; Saving the Ewaso Ng’iro Ecosystem through sustainable management of natural resources, enhanced livelihoods and peaceful coexistence.

The Government further listed the top five most common cancers in the country as breast, cervical, oesophageal, prostate and colorectal cancer

By Obare Osinde | 20 hours ago

By Steve Mkawale | 3 days ago