With about three weeks to go before he packs his bags, President Uhuru Kenyatta has set out to define his exit through a series of sunset acts that may outlive his presidency and underline the trajectory of the next administration.

After what looked like a lull period in which he neither laid his cards bare nor moved out, the President is finally laying the speculation about the role he will play in succession politics at their prime.

As attention slowly shifts from Uhuru to the incoming officeholder, a choice between his deputy president William Ruto or the former prime minister Raila, Uhuru’s hand is becoming more urgent.

Rather than sit around and see out the sunset days of his tenure, worrying about what he could or could not have done to control the course of his presidency, President Kenyatta is making his contribution to ODM leader Raila Odinga and his running mate Martha Karua’s race to succeed him.

“He doesn’t appear to show signs of fading away into the sunset. He seems to want to remain active, and said as much during a campaign function this week (that he is not going anywhere),” political analyst Tom Mboya said, adding that it is apparent that he intends to remain active.

“People, in general, may have underestimated how shrewd a politician he is! So I suspect remaining engaged will work to his benefit”

Freed of the concern for reelection, President Kenyatta has dedicated his recent days in office campaigning for Azimio la Umoja. He has taken up the responsibility of drumming up support for Azimio by turning development tours into political rallies.

Kenyatta has shown that he is disinterested in extricating himself from the politics of his succession and the government that will come after. Instead of preparing to retire, even though he claims to be tired, Uhuru has been hiring and firing.

Just last week, President Kenyatta made 142 appointments to the boards of various government agencies and parastatals. The appointments were published in the Kenya Gazette notice on July 8.

The three-year-long appointments would mean that the incoming president would have to look elsewhere for positions to reward some of his allies or be forced to revoke these appointments. Some of the appointments made were to the Universities Funding Board of Trustees, Council for the Kenya Education Management Institute, Kenya National Examination Council, and The New Kenya Co-operative Creameries Board among others.

On Wednesday, he set out to decorate allies who stood by his government with state awards.

Any sign that the twilight phase of his presidency has caught up with him would not been more apparent from the manner in which the President handled the Kenyatta University land issue, also earlier this week.

In his awareness that he had less than a month until he left office, Uhuru was particular that he would go home with those people who were frustrating his plans.

“Lakini bado nimebaki wiki tatu... we shall deal with those people swiftly and very effectively. Tutaenda nyumbani na wao. We can’t have people operating as individuals,” he said.

The way the president has run his affairs are unlike a final-term president.

While a second-term president would be unburdened by the concern that he would have to go to the people for reelection, Uhuru has spent some of his time concerned about how his legacy in the city will affect the candidate Azimio candidate Polycarp Igathe and by extension Raila.

The script has been the same in Nairobi on Tuesday and in Samburu a day later. The President would commission a project, issue title deeds and finish by declaring that Raila would be the best leader to be elected to take over from him.

“They (Raila and Karua) are the ones who will be able to continue with this job for us to ensure we have a country that is being led in a just manner, the right way and in a way that solves citizens’ problems,” Uhuru said at Muhuri Muchiri in Ruai.

Conceding that he had held his hand in the fight against corruption, Uhuru said Karua was a tough woman who would not hesitate to take action against thieves like he did.

“They will be in cells. She won’t forgive them as I did,” Kenyatta said.

The President has been making his moves on the political chess board, moving stealthily to checkmate the Kenya Kwanza Alliance.

On Saturday, Uhuru met religious leaders at State House in a meeting that was dubbed the non-denominational worship and prayer service but was really to win over the men of the flock to his side.

A press release after said that the clergy had “committed to assist their followers to make right political choices during the August national polls”.

By exercising his influence over them, Uhuru hopes that the clergy will help push the Azimio agenda in the region.

In meeting the religious leaders, Uhuru is making a play for a constituency - the evangelicals - that DP Ruto has appealed to.

He said he has not neglected the region, rather he settled on Karua so that the community would be safe in her hands. Uhuru could also, wittingly, have handed the Azimio candidate in Nairobi a fighting chance after welcoming former Nairobi governor Mike Sonko back into the fold in the hope that his involvement could invigorate the race.

Interior Cabinet Secretary Fred Matiangi, who coordinates Cabinet, has been having a very busy schedule wrapping up government business.

Yesterday, when he met development partners and foreign envoys, Matiangi who is also key in the transition committee  said: ‘‘We will do everything it will take and under the law to fulfill our constitutional mandate and our obligations under the law namely; to ensure a peaceful election, effective transition.”

He added, he was determined to leave a “stable country because our democracy has come of age and the people of Kenya want a peaceful election, desire a peaceful transition of power and country to have a stable country and economy.’’ 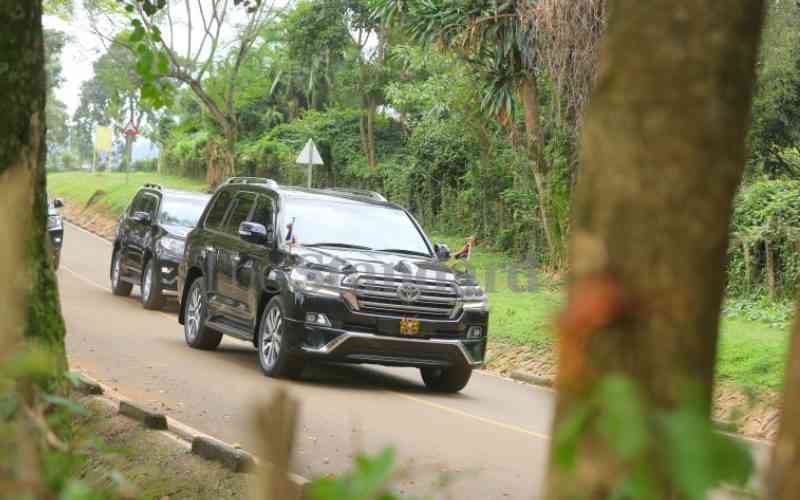 Premium Inside Uhuru's fully booked diary just four days to elections
President Uhuru Kenyatta is keen to secure his legacy and his forays are primarily to launch projects.
National
By Waikwa Wanyoike
1 month ago

By Paul Ogemba 51 secs ago
Paul Gicheru, lawyer who went to Hague court to clear his conscience

By Dennis Kabaara 51 secs ago
Could Ruto lead charge in Africa to rescue much delayed SDGs?