Inside the deal that brought Mike Sonko back to the fold

By Allan Mungai and Josphat Thiong’o | 2mos ago

The eulogy of Sonko spoke about the heights he had scaled rising from Eastlands in Nairobi with his souped-up matatus and riding on that fame to become a Member of Parliament, Senator and finally governor of the capital city. But like a political Lazarus, Sonko has risen from the dead.

Tuesday was a day of fast-moving development for Sonko. At one moment he was in Mombasa receiving the endorsement of Azimio la Umoja-One Kenya leader Raila Odinga and his running mate Martha Karua. Later he was campaigning with President Uhuru Kenyatta in Nairobi.

Faced with the possibility of being locked out of the Mombasa governor race, Sonko moved between the courts and the electoral agency’s disputes tribunal before the decision was finally delivered yesterday, handing him a reprieve.

The High Court in Mombasa yesterday ordered the Independent Electoral and Boundaries Commission (IEBC) to accept Sonko’s nomination to run for Mombasa governor. The court also ordered the commission to gazette the former Nairobi governor as a contender.

Sonko, who is vying on Wiper party ticket, will battle it out with ODM’s Abdulswamad Nassir and Hassan Omar (UDA) among others in the race to succeed Mombasa Governor Ali Hassan Joho.

In May, the former Nairobi governor was forced to leave Azimio rally in Mkomani, Mombasa after chaos erupted.

Police shot in the air and lobbed teargas canisters after supporters of rival camps clashed.

After he was impeached as Nairobi governor, Sonko was ostracised by the political elite in the country, including President Kenyatta and Raila.

It did not help that Sonko blamed the government for his downfall.

It was thus a surprise, that Sonko suddenly appeared to be embraced by the upper echelon of Azimio - Uhuru, Raila and Karua.

Sources close to the former governor suggest that his endearment with Azimio could be to benefit the candidacy of Jubilee Nairobi governor candidate Polycarp Igathe, who will face off with UDA’s Johnson Sakaja.

According to sources the former governor’s return to the top political circles was spurred by Monday’s gubernatorial debate between Igathe and Sakaja.

Sources say the top brass within Azimio felt that from the debate, the Nairobi Senator Sakaja had emerged as the most appealing candidate to the public, necessitating them to come up with a contingency plan to ensure an Igathe win come August 9 elections.

The Azimio leaders reached out to Sonko on Tuesday, urging him to use his influence in Nairobi to rally support for Igathe.

The former governor accepted, but in return asked the coalition honchos for a fair chance to vie for the Mombasa governorship.

“The deal that was struck was that Sonko must deliver Nairobi for Azimio coalition and in return, he will be given a fair chance to vie for the governorship in Mombasa where he equally enjoys a huge following,” said the source who sought anonymity.

“That is why for the first time in a long time, you saw Sonko accompany the President to issue title deeds in Ruai on Tuesday, where he campaigned for Igathe flanked by Babu Owino, Anne Kananu and Lt-General Mohammed Badi,” he added.

Embakasi East MP Babu Owino said that if there were any differences between the former governor and the President, then they had been solved.

“Politics has no permanent enemies. Sonko’s issue was with President Uhuru and from the way they were interacting, I can tell that there is no longer an issue and that Sonko will campaign for Azimio in Nairobi,” Babu said.

According to another source, Sonko has been waiting in the wings for such a deal to come to his political rescue, which was evidenced by his choice to move to the Wiper party earlier this year.

The source explained that the zoning worked well for the former governor given that Kalonzo had been insistent that Wiper party should be left to field its candidates in Mombasa.

“There was, however sibling rivalry between ODM and Wiper party for a while, given that the former felt that Mombasa was its stronghold and it was only right that their candidate Nassir was prioritised in the gubernatorial race. Furthermore, Sonko was already not in good books with the government,” he said.

The Sonko in Embakasi East on Tuesday was different from the one of recent months who had been battling court cases to ensure his name is in the Mombasa race.

The Azimio la Umoja is keen to tap into Sonko’s influence in Mombasa and Nairobi.

The former governor still has considerable sway on a certain voting block in Nairobi, especially the youths and the poor, a constituency that Sakaja has appealed to in the vacuum left by Sonko’s impeachment and interest in Mombasa county.

It is instructive that despite being highly critical of the county government, Igathe was keen to show that they were still friends with Sonko. “In fact, I have just spoken to him a few minutes ago,” Igathe said.

Azimio also feels that Sonko could excite the Mombasa race and bring out more people to vote. 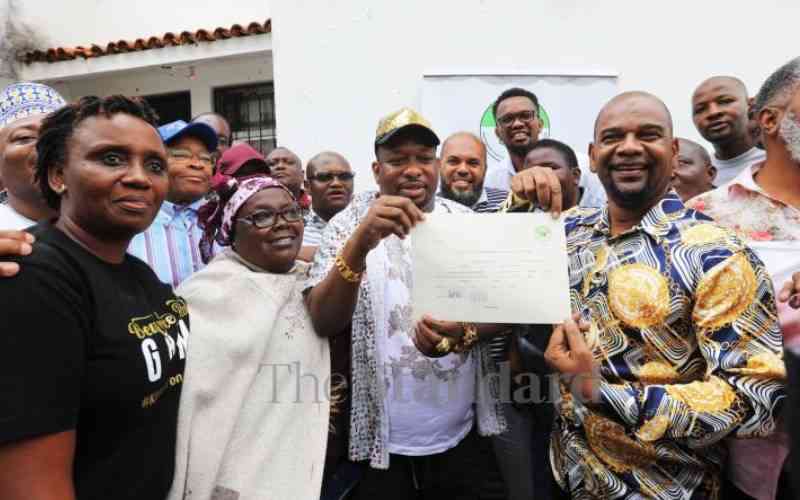 Premium Court drama as Sonko in spirited battle to overturn impeachment
Former Nairobi Governor Mike Sonko's lawyers treated the court to a back and forth while seeking an adjournment.
Coast
By Kamau Muthoni
2 months ago
.