By Ndungu Gachane | 3mos ago

Sibling rivalry in the major coalitions could dim their chances of garnering the much-needed numbers in the National Assembly and Senate.

Among the repercussions that may come along is vote splitting or what is popularly known as ‘cannibalism’ in coalitions which will work at the advantage of their smaller opponents.

When the supporters of one political alliance split their votes among different candidates aligned to their preferred coalitions, their opponents will clinch seats albeit with few votes.

After realising that cannibalism within the coalition will affect its performance, leaders such as Mathira MP Rigathi Gachagua, the Kenya Kwanza presidential running mate have decided to only campaign for UDA’s candidates in Mt Kenya, saying he needed soldiers to support and advance Kenya Kwanza’s course in Parliament.

In Muranga, Farmers Party of Kenya is affiliated to former Devolution Principal Secretary Irungu Nyakera and has 28 aspirants. For the governorship candidates, Kenya Kwanza has three candidates who owe their allegiance to the Deputy President.

Amani National Congress under the leadership of Musalia Mudavadi also has aspirants. In Nyeri Kenya Kwanza has Governor Mutahi Kahiga seeking the re-election on UDA ticket with Peter Munyiri vying under Moses Kuria’s Chama Cha Kazi while for the Women Rep position, Rose Waikundi is using the CCK in her bid to unseat Rahab Mukami.

Raila’s Azimio alliance is also facing the same challenges in Mt Kenya region. The coalition party is made up of 25 political parties that include Jubilee, Narc Kenya, Kanu among others which are sponsoring candidates.

Narc Kenya for example has been given a new lease of life after its leader Martha Karua was picked to be Raila’s running mate. The party has candidates touted as front runners in Kirinyaga, Nyeri and Laikipia counties who will face Jubilee and Kanu candidates. But Karua said although the candidates have been cleared, they are holding consensus meetings to ensure they only field those who will secure wins without dividing votes.

“The essence of vying is winning and that is why we are employing the strategy which will be a win will move to all the candidates,” said Karua. But for Kenya Kwanza, there seems to be no sign of agreeing on who to step aside. This is mainly because the parties agreed to retain their original identity when they signed a coalition agreement.

Nyakera said they agreed to retain their original identity but the UDA is taking advantage of the provision by campaigning against them. He read malice and betrayal by the UDA move to deny them.

“During negotiations, we agreed that we will be equal partners and all candidates will be treated in the same manner. They should not popularize UDA candidates but let the locals decide. This is utmost deceit and conmanship,” he said.

The Farmers Party of Kenya (TSP) chairperson warned that if Ruto and other Kenya Kwanza Alliance principals do not address the issue, it could trigger voter apathy.

“My supporters are angry and have even threatened to vote for the Azimio leader while others may not vote for president and this must be addressed,” said Nyakera

Dancun Njuguna, a candidate in Gitugi, faulted the move by UDA leaders. “That is against the spirit of the coalition agreement signed between ANC and UDA. Ruto is shortchanging us,” he said. 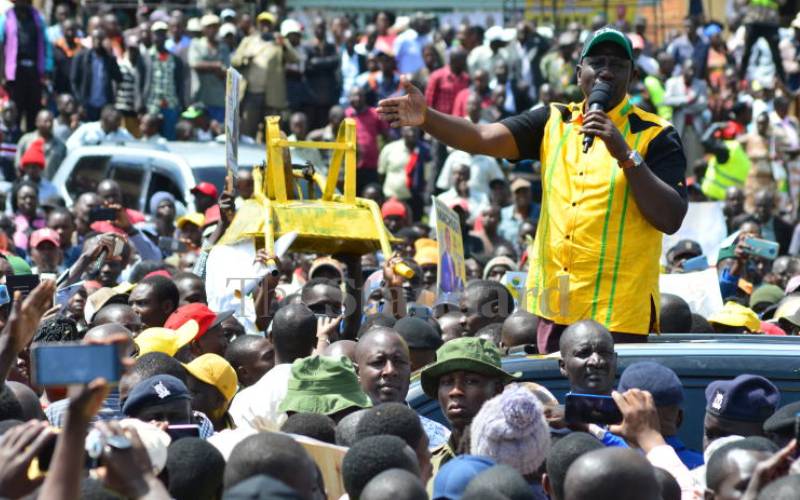