Raila and Ruto in fierce battle for Gusii vote

By Harold Odhiambo and Eric Abuga | 3mos ago

Although the region has overwhelmingly backed ODM leader Raila Odinga in the past elections, his allies are leaving nothing to chance amid changing dynamics.

Several fringe parties hoping to reap from the competition for the region’s more than 600,000 votes have joined either Mr Odinga’s Azimio la Umoja One Kenya or Kenya Kwanza alliance of Deputy President William Ruto.

In a bid to align themselves with the winning team, local politicians have been shifting allegiance, some flip-flopping between the two opposing sides. Yesterday, Dr Ruto has asked residents of Nyamira to vote for him as a payback to the numerous funds drives to help women, youth and boda boda operators.

The UDA leader said he had outperformed his main opponent Mr Odinga in helping the people of the county develop.

“I have come here in numerous occasions and my works can be seen all over. Now that I have proved to be your closest ally, why then can’t you pay me back?” the DP said.

But Azimio’s camp has intensified the bid to ring-fence the voting bloc with a promise to revamp the region’s economy and agricultural sector.

Lawyer Dan Omari says most voters in the region are enlightened and will vote for the convincing candidate.

“An individual voter gets to make an independent decision based on his or her understanding of a leader. It is not easy to just come and go. You must convince the Kisii voter,” he argues.

North Mugirango MP Joash Nyamoko, who is the UDA coordinator in Nyamira, believes that the community has come of age.

“We have a voting pattern that is unique. Voters keep their leaders on their toes and it is never easy to intimidate them into voting for those they perceive don’t have their interests at heart. Presidential candidates will always have to campaign in the region every time and again to get assured that indeed they have done enough groundwork.”

Mr Nyamoko says the region has moved from a swing vote to a major voting bloc that will have a say at the national table.

Kisii Woman Rep Janet Ongera argues that the region has become a major battleground because of unity and representation in the national government.

“We have now become stronger and politically attractive because of our perceived unity and numbers. We have our own sons and daughters who make decisions either in private or public sector. They remain the image of our region. Anybody coming for our voters has to give us an assurance that indeed our people will play part in the formation of the next government.”

According to constitutional lawyers Ken Amondi and Clifford Otieno, say the top contenders in the presidential contest know the race is tight and every vote counts.

“The reason the presidential candidates have intensified their campaigns in the region is that it is a battleground where most voters are yet to make up their mind on who to vote for,” says Mr Amondi.

Barely a day after Mr Odinga led his Azimio brigade to campaign in the region, Dr Ruto and his team were back yesterday.

The DP, who has visited the region for more than five times this year, continues with his tour today as he hopes to reverse any gains Azimio may have made with the Monday rally.

Addressing rallies in Borabu, Nyamira, and Kisii, the Kenya Kwanza leader took credit for a number of projects the Jubilee administration has completed, and promised more.

“I have come back today... I’m asking for your support come August 9,” he said.

“We have built three colleges in Nyamira to ensure that the people of this region get an opportunity to get an education.”

The Azimio team plans to return to the region in two weeks for a one-week tour.

Mr Odinga is now counting on the union with other smaller parties that have fielded candidates in the region to earn him a majority of votes.

About two weeks ago ODM Chairman John Mbadia and Governor James Ongwae of Kisii, during a meeting with Mr Odinga’s campaign team, resolved to work with the fringe parties.

On the other side, among the leaders Kenya Kwanza is banking on are governor candidates Walter Nyambati (UDA) and Joseph Kiangoi (ANC), Woman Rep aspirants Rebecca Thomas (ANC), Alice Chae (Ford Kenya) and Josephine Nyarera. 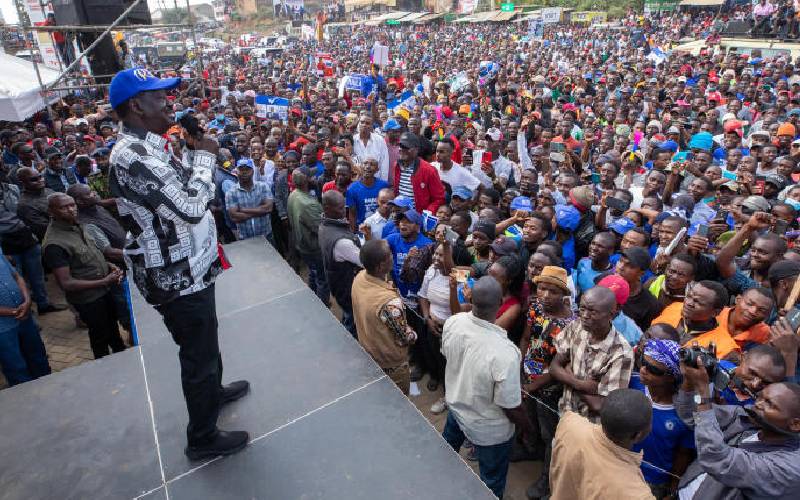 How internal rifts could cost major coalitions much-needed numbers
Kenya Kwanza and Azimio have many affiliates, most of whom are fielding candidates.
Politics
By Ndungu Gachane
3 months ago
.

By Titus Too 53 mins ago
Colleagues mourn Paul Gicheru as hard working, social