Presidential candidates Raila Odinga and William Ruto are walking a tight rope in their attempt to stem internal rivalries threatening to break their respective coalitions.

Confrontation between their allies is getting out of hand, with analysts warning that the rivalries may cost the two coalitions seats.

Rivals in the two camps have been using joint campaigns by the coalitions to outdo each other, with some of the confrontations turning physical.

The Standard has established that some competitors are hiring hecklers to shout down their opponents during political rallies.

Intense mobilisation by leaders eyeing county seats ahead of any political rally hosted by the two coalitions have become common across the country as rivals seek to make a political statement on their perceived popularity.

With most of their lieutenants competing for similar seats, the stiff competition has compelled the coalitions to appeal to members to tone down and embrace inclusivity in their campaigns.

According to insiders, the rivalries have ushered in mistrust within the coalitions as members seeks to outdo each other but still campaign for their presidential candidate.

In Raila’s camp, internal wrangles are intense in several parts of the country including Nyanza, Mombasa, Nairobi, Eastern, and North Eastern in what could derail Azimio campaigns.

In the build-up to the 2017 General Elections, sibling rivalries in Raila’s camp resulted in physical fights his presence.

So intense was the rivalry that at one point, Homa Bay Town MP Opondo Kaluma and Mr Washington Ogaga, who was seeking to unseat him in 2017, engaged in a wrestling match.

Alarmed by the prospects of the current internal rivalries getting out of hand, The Standard has established that the campaign teams are working on a plan to ease the tensions.

The camps plan to reduce the number of speakers in rallies. At the same time, a meeting of all candidates within the Azimio coalition will be held.

A senior member of Raila’s coalition said: “We will not allow individuals to use the platforms to attack each other. Our focus is on the presidential campaigns and we will engage rival candidates to focus on the bigger picture,” said the official.

Martin Andati, a political analyst said the rivalries could see major parties lose elective seats to competitors. “In Kakamega for instance, ANC had six seats but the party could get fewer in the August 9 elections,” he said.

In the region, there is an intense rivalry between Musalia Mudavadi’s ANC and Ruto’s UDA candidates eyeing the same seats. Raila’s camp is also feuding which has seen DAP-K candidates stop attending joint meetings with their ODM counterparts.

On Sunday, Kenya Kwanza leaders led by Ruto, Mudavadi and Bungoma Senator Moses Wetang’ula reached out to their supporters in Western to end sibling rivalry in their alliance.

Ruto said he will be comfortable with whoever will be elected under Kenya Kwanza for various elective seats across the region. Raila also adopted a similar tone in Kisii on Monday where he appealed to voters to back any candidate contesting under Azimio One Kenya Coalition ticket.

For Ruto’s camp however, the simmering rivalry appeared to be breeding possible revolt in Vihiga, Kakamega and Bungoma counties.

In Bungoma, UDA supporters and those of Ford Kenya were engaged in heated exchanges over patronising dominance of the lion party.

But despite the efforts, candidates appear inclined to compete and wants the race to be left wide open for them.

Former Kakamega senator Boni Khalwale argues that candidates vying on ANC, Ford Kenya and UDA parties must be allowed to compete in the elective seats.  “Let them compete and have the best candidate win.”

Barrack Muluka, a communication strategist, says things would have been easier if UDA and ODM would let ANC and Ford Kenya field candidates in the region.

“They should have let local parties sponsor candidates for MP, senator, woman rep, governor and MCA seats because they already have presidential candidates,” said Muluka.

In the last four days, the intense rivalry within Raila’s camp has played out in front of him. He had to cut short his speech in Machakos on Sunday after a commotion ensued on the dais. In the region, Machakos Wiper governor candidate Wavinya Ndeti and her CCU counterpart Nzioka Waita have been feuding.

A similar scenario is also developing in Mombasa where ODM’s Abdulswamad Nassir and Wiper’s Mike Sonko have been engaged in an intense competition. Last month, Sonko was repulsed by rowdy youths while attempting to access the venue where Raila was holding a rally.

In Gusii region, at the centre of the conflicting positions is ODM governorship candidate Simba Arati and other Azimio affiliate candidates.

Arati says he was appointed to lead Raila’s campaigns in the region and went ahead to appoint a coordinating team.

The Dagoreti North MP has never attended any of the Azimio Nyanza Presidential campaign coordinating meetings.

The first meeting was held in a Kisumu hotel while the other was held in Kisii attended by the Nyanza campaign team chairman John Mbadi and his co-chair James Ongwae.

On Monday, while addressing his supporters at Etago Stadium in South Mugirango Kisii, Raila called on the candidates to hold peaceful campaigns.

“Voters will decide. Let us not engage in unnecessary wars. We all belong under one large family and we should maintain that,” he said.

Wiper leader Kalonzo Musyoka, who also addressed the rally, said he will drum up support for strong candidates. “Those who feel the heat should step aside and allow those with the muscle and strength to continue with the race.”

Jubilee Party Kisii Senate candidate Omingo Magara said all they want is peace. “We want to engage our brains and not our psyche. The local dynamics notwithstanding, we are all interested in winning the apex seat,” he said.

Kenya Kwanza seems to have resolved sibling rivalries in some counties.

Those who were set to vie for various elective seats on affiliate parties dropped their bid and instead have been supporting the coalition’s preferred candidates for various seats.​ 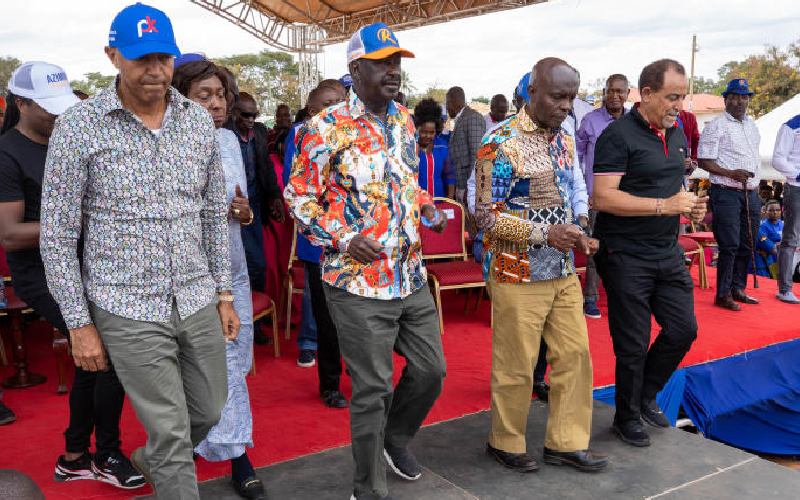 Raila's water pledge to woo Ukambani voters
Raila Odinga said if the coalition wins the polls, his government will prioritise programmes to ensure residents have enough water.
Politics
By Stephen Nzioka
3 months ago
.