By Jacob Ng’etich | 5mos ago

Deputy President William Ruto had in 2019 contemplated resigning from the government.

He, in fact, called the media to make the decision public, but a four-hour meeting with President Uhuru Kenyatta halted the move.

According to a biography by author Babior Newton, Ruto had had enough of the infighting and “insubordination” within his Jubilee Party.

He wrote a resignation letter addressed to President Kenyatta before the State House meeting in which Jubilee Vice Chairman David Murathe was asked to resign made him change his mind.

The book titled, The Rise of a Hustler: From Chicken Seller to Presidency, says Ruto was infuriated by the “consistent contempt from the leaders of the Jubilee Party”. The book says Ruto called then Jubilee Party Secretary-General Raphael Tuju and when the call was not picked, he cleared his table and asked his aides to call for a media briefing after he had communicated to his boss that he was going to resign. 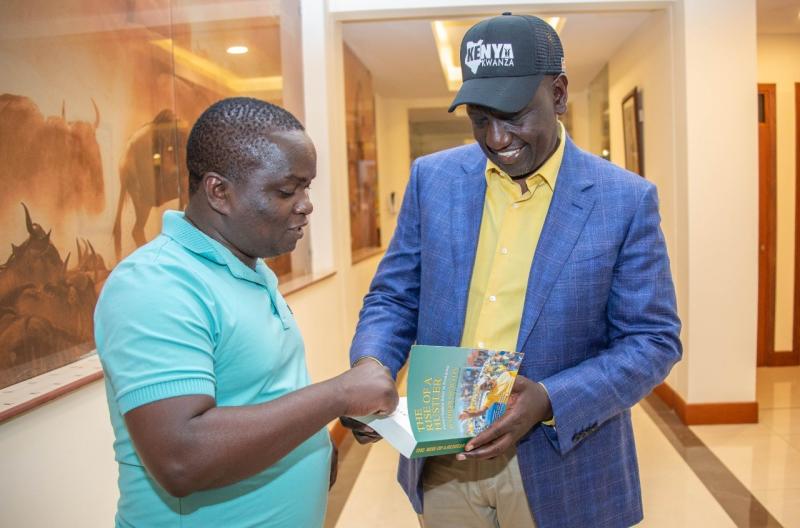 “As the phone stopped ringing, he pulled a speed dial and asked the media to be invited on short notice. Even his closest aides were caught unaware. He had had enough of the abuses and disrespect from the Office of the President and the so-called deep state,” the book reads.

As Ruto cleared his desk, notes the book, his staff sat huddled around their desks as their boss pondered his exit strategy.

However, after the meeting with Uhuru, the president’s chief of staff called Tuju and instructed that Murathe resigns without any condition.

Just hours after the meeting, there was breaking news on all major television stations. Murathe was resigning from his position in the ruling party.

Announcing the unprecedented move on that Sunday afternoon, Murathe said he could not continue serving as Jubilee vice chairman, considering his bid to block Ruto from vying for the presidency in 2022.

“I now find that it is no longer tenable to stay on as the party vice-chairman, given that I will have to sit in the same National Executive Council with a man I am taking to court to block from running for president,” he said.

Apart from his political life, the book also details Ruto’s personal life, including his decision to stop drinking and join Christian Union (CU) while he was a student at the University of Nairobi.

Newton details how Ruto rose from a humble background to become a deputy president, including when he became a breadwinner for his family at the age of 15.

The biography focuses on “the most consequential decisions” of Ruto’s political life and childhood, and his occupancy of the Office of the Deputy President.

Along the way, the writer notes, Ruto acknowledges various mistakes that came to haunt the Jubilee government right from its conception but that the time was not right to correct them.

The book says Ruto believed that the president’s advisers created an imaginary power struggle and feared that the DP was out to outshine his boss and break the tradition of power.

In other chapters, the author explicitly describes Ruto’s involvement in Youth for Kanu 1992 (YK ‘92) where he got attached as a political volunteer.

It is here where he meets a petit, Harvard schooled woman – Julia Ojiambo (Ruto’s destiny creator).

The book also details the contest between Reuben Chesire and Ruto, with the author writing that the entire scenario proved to him that there is a ruthless character in Ruto which at some point makes him go against the system and become a genius renegade. Ruto went against President Daniel Moi to defeat Chesire for the Eldoret North parliamentary seat in the 1997 elections.

It is an axiom of Kenyan politics that the vice president is always silent and works under the president’s shadow, but that’s not for Ruto, who at some point became more popular and powerful than his boss, something pundits criticised as a “double presidency”.

In the biography, the author says Ruto “had nowhere to rise but up”.

With three months left to the end of Kenyatta’s presidency, the author reveals a lot of details and secrets inside the presidential palace that touch on the president and his deputy.

The book looks at the insubordination Ruto suffers from the renegades within the president’s office, including him being denied travel clearance at the airport.

The author says it took him two years to put together the 600-page book that takes us back to Ruto’s childhood and his mission to make it in life.

At Kambi Kuku where he makes his debut as a chicken seller from Sugoi in Kamagut, the author writes that at as early as 15 years of age Ruto was already a breadwinner in his family. His father David and mother Sarah Cheruiyot loved him, says the book.

The book also gives deep, secretive details of how decisions, negotiations, and endless talks ended up in the formation of the Kenya Kwanza coalition.

He writes that there are instances that made Ruto a political genius and gave him a lifeline as a master tactician ahead of Azimio presidential flagbearer Raila Odinga and President Kenyatta.

The book positions the Uhuru-Ruto-Raila relationship as an important one in political equations in the country.

In the book, Uhuru tries to portray Ruto as “a ruthless careerist, a zero-sum political thunderdome who advocates for winners to displace losers”.

The author writes that Uhuru managed Ruto for some time and eventually duped him.

The book, which will be launched on June 22, is printed in the United States of America and will be distributed internationally by Barnes and Nobles Company.

The book can be preordered at www.babiornewton.com.

William Ruto The Rise of a Hustler: From Chicken Seller to Presidency Election 2022
Share this article

Premium Stone pillar with a rich history of World War II
Central
By Ndung’u Gachane
2 hrs ago
Messi, Argentina beat Netherlands on penalties at World Cup
Football
By Associated Press
3 hrs ago
Premium How Kenya can get its syllabus back on track, avoid CBC hitches
Education
By Elisheba Kiru and Brenda Wawire
3 hrs ago
We need to be serious with public safety, law and order
Houghton Irungu
By Irungu Houghton
4 hrs ago
.