Deputy President William Ruto started his journey to the Bomas of Kenya in supplication. He would later emerge as a candidate for the August 9 presidential election.

Holding hands with his allies, Ruto prayed for God’s guidance and for the removal of any darkness. But it wasn’t so much a prayer against literal darkness but obstacles he might encounter as he sets out on a quest to become Kenya’s fifth president.

After Bomas, Ruto’s candidature would be official. He would no longer be DP aspiring to be President but the United Democratic Alliance (UDA) candidate for president. The party had prepared for it.

From his office and residence in Karen, Ruto drove to Bomas, not far away, in a convoy. His supporters had arrived hours before. They were everywhere. Some waited outside on motorcycles bearing his campaign posters and blowing vuvuzelas.

This was a stark contrast to what Bomas has been in the week since the IEBC began certifying presidential aspirants. A roadshow lorry was parked outside the gate with the speakers silent awaiting the grand moment when the nominee would become a candidate.

Ruto’s campaign fliers floated in the gust of passing vehicles entering Bomas. They rose then descended slowly, almost lazily back to the ground.

The DP and his running mate Rigathi Gachagua made their way to Baraza Hall where IEBC chairman Wafula Chebukati and his team were waiting. On days when IEBC was clearing other candidates, the auditorium at Baraza Hall was barely occupied.

Now it was full of restive supporters following as Ruto and Rigathi moved from one table to another.

The DP was finally ushered up the stairs where Chebukati uttered a statement he has made only a few times. “I am satisfied that you have met all the requirements. The application of William Samoei Ruto and his running mate to participate in the August 9 presidential election is approved,” he said.

Everything about Ruto’s clearance yesterday was deliberate, from the manner he and Rigathi dressed - dark suits and yellow and green ties - to his choice of backers.

The UDA candidate has built his campaign on the platform of empowering those at the bottom of the economic pyramid. He calls them the mama mbogas and boda boda riders.

His candidature was seconded by a boda boda rider Calvin Ochieng’ from Kilimani - who Ruto described as a vital part of his campaign and Pauline, a mama mboga from Kiambu.

With his riding gear - a heavy leather jacket, trousers, boots, reflector jacket and helmet in hand, Ochieng looked out of place beside the dark suits of Ruto and Gachagua. So did the mama mboga with her orange headscarf.

But this is Ruto’s message to the country that small business people - the hustlers - will have a space in his government. Ruto was handed a sample of a ballot paper to confirm that his name was correct. He will be on the ballot.

His address after he had dispensed with the formalities underscored this message. On the way out, supporters had flags bearing Ruto’s image. He sang along and danced - ‘Nimeuona mkono wake Yesu’- swaying lightly clapping and beaming.

Then there were yellow and black confetti and smoke bombs briefly catching the DP off guard. Finally, Ruto made his address as a candidate.

In his speech, Ruto, buoyed by his clearance and the reception he got from his supporters, claimed there was a plot by shadowy individuals he did not name to manipulate the election and subvert the will of the people.

While Ruto said a win in August was imminent, he protested against unfair treatment from the media.

“We do not want to be favoured. We want to be treated fairly like everybody else. We are not asking for what’s more than fair. Respectfully, we want to request our friends in the media to be fair,” he said. Ruto protested that he had been treated unfairly by some media houses. According to him, his competitor, Azimio la Umoja flagbearer Raila Odinga, got more airtime on TV while he barely featured.

Ruto became the fourth candidate to be cleared by the IEBC to run for State House. He expressed confidence in the polls agency, although he said he was concerned that “about 800 000 voters had been moved this way and that way.”

“We have confidence that they will sort it out. We want to ask IEBC to be vigilant. There are desperate people who have no plan and no agenda. The only thing that is left for them is to try and manipulate this election. We are telling them that they will have no chance because we are vigilant and we will make sure that every vote is counted,” said Ruto. Ruto has appointed Tharaka Nithi Senator Kithure Kindiki as his chief agent. Kindiki, UDA Secretary-General Veronica Maina and Turkana Governor Josphat Nanok will serve as the liaison officers between Kenya Kwanza and IEBC. “Henceforth, it shall not be about leaders but about the people. Not about interests, positions and sharing of power by leaders but about the aspirations of the people, their wishes and dreams and how the political architecture of our country will deliver for the millions of young people who today do not have jobs,” he said.

Ruto said his government would not increase the debt, observing that in the last five years, the government had borrowed close to Sh7 trillion. He said he had a plan to revive the economy, lower the price of basic commodities and increase agricultural productivity.

“We can create millions of jobs for young people and we can transform our country. Kenya Kwanza will not continue the borrowing spree,” he said. He said his government would focus on investment, labour-intensive rather than capital intensive infrastructure.

He said that capital intensive infrastructure benefitted only a few people while labour-intensive investment in infrastructure like housing, manufacturing, and agro-processing value addition would not only create opportunities for millions of people to work but also ensure more Kenyans had money in their pockets.

“This is a moment of a lifetime for many Kenyans. Our economy is in dire straits. Kenyans can hardly afford a meal. The price of basic commodities has gone up,” said Ruto. The cause of the problems Ruto gave was the handshake between President Uhuru Kenyatta and Raila.

“The big four agenda of housing and manufacturing was supposed to deliver for us millions of jobs. The transformation of agriculture and food security and nutrition was supposed to sort out the cost of farming inputs and to make sure that farmers could enhance their productivity so that more food could be produced and using the forces of supply and demand, we would get cheaper food in our stores,” he said.

Unfortunately, he claimed, that was not to happen because the handshake denied the people of Kenya the chance to move their country forward.

“That is the opportunity Kenya Kwanza wants to seize to create millions of jobs and work on producing enough food so that we can reduce the cost of living,” said Ruto. 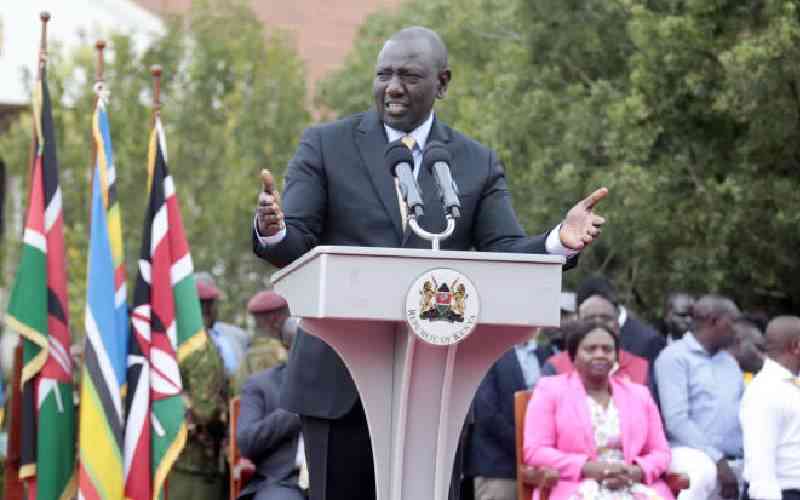 Premium Ruto's march from a Kanu stalwart to the commander-in-chief
When Uhuru Kenyatta announced in 2007 that Kanu would not field a presidential candidate, Ruto had already decamped to ODM.
National
By Biketi Kikechi
1 month ago
.