By Kamau Ngotho | 3mos ago

The experts are expected to carry out a scientific SWOT (strengths, weaknesses, opportunities, and threats) analysis of the eleven short-listed candidates, The Standard has learnt.

On Thursday, the selection panel chaired by former Cabinet minister Noah Wekesa released the first 11 names as the final short-list only to add Ngilu’s name in late afternoon. The other three – Munya, Oparanya, and Kinyanjui – were added to the list on Saturday.

But a source in the panel who didn’t wish to be identified said only the first three names – Kalonzo, Karua and Kenneth - are of interest to the panel. The other eight were picked as an after-thought to divert attention and buy time, claimed the source.

May 16 is the IEBC deadline for all presidential aspirants to name their running-mates.

A good pointer there could be dummy cards in the delicate poker of picking running-mate is that while Kanu chairman Gideon Moi forwarded Kalonzo’s name to the selection panel, his own party through Secretary General Nick Salat in turn presented Gideon’s name as Kanu’s choice.

The short-listed 11 have been invited for interviews, which Kalonzo has vowed not to attend. Scores by the first three will be handed to Raila for the final decision. Inside sources said whether Kalonzo attends the interviews, he still will be scored and results handed to Raila alongside those of Karua and Kenneth.

The scientific analysis will determine what strengths and opportunities the running-mate brings to the Raila ticket, as well as their inherent weaknesses and threats they portend in the event of a Raila win.

“It is balance of two opposing variables that will help Raila decide who brings most value to the ticket and who best to work with once at State House,” says the source.

Separately, political observers say Kalonzo has strengths to bring on the ticket. He has a solid vote bloc estimated at between 1.6 and 2 million. He has served as vice president and twice been running mate to Raila. Besides, he has had longest stint as a Cabinet minister compared to others in the short-list.

But Kalonzo shinning score-card is dimmed by a longer list of negatives. Foremost, having him as running mate to Raila will work to great advantage of the rival Kenya-Kwanza alliance fronted by Deputy President William Ruto.

The DP and his allies betrayed themselves when they publicly demanded Kalonzo be unchallenged running mate to Raila. Why would they have an interest in internal affairs of their competitors unless there is something to gain. Within Azimio, there is suspicion Kalonzo may have a secret deal with the DP and Kenya Kwanza brigade which he denies.

Second, much as Kalonzo has a solid bloc vote to bring to the table, picking him as running mate puts Raila at risk of completely losing traction with Mt Kenya bloc which has six million votes, and where the DP already has a head-start. So will Raila let go Mt Kenya to have Kalonzo or the other way round?

The manner in which Kalonzo and his allies are demanding the running mate slot too works against him. He claims entitlement as his allies resort to threats. There has also been claims that Kalonzo wants to have many MPs on his side so that he could impeach Raila should he be president and they happen to disagree.

Should Kalonzo miss the running mate slot, he could go it alone and contest the presidency with hope to cause a run-off. But what does he gain in that? Unlike in 2007 when he had chance to negotiate the VP slot after stalemate between President Mwai Kibaki and Raila, in the new Constitution the two candidates going for run-off must retain same running mates they had in the first round. Second option for Kalonzo is to switch camp to Ruto. But there, the competition for running mate slot is more vicious than in Azimio. There’s little chance he would be the deputy in that stable. In any case, Governor Alfred Mutua has already joined the DP camp.

Third route and the most likely Kalonzo will travel is called the Samson option. Remember the biblical Samson who once cornered brought down the temple so that he would go down with everybody else inside. Finding himself trapped in three dimensions, Kalonzo will likely opt to spoil for everybody else.

Within Azimio, he and his allies are playing victim with intention to run-away with sympathy votes in case he doesn’t get the running mate slot. The effect of that is to deny Azimio the substantive lower-Eastern vote it had independently secured for Raila courtesy of the three Ukambani governors. Governor Mutua set the pace in bolting away yesterday.

Kalonzo going it alone, Governor Mutua rooting for the DP, Governor Ngilu sticking with Azimio and Governor Kivutha Kibwana losing interest in the whole show, will mean scattering of Ukambani vote to nobody’s gain. Kalonzo will have played Samson – brought down the temple on himself and everybody else.

Excitement in the ticket

Karua’s foremost asset is to give Mt Kenya region a stake in the Azimio ticket. Having no lead presidential candidate this time round, the question in the mountain has been whom is their person in the two leading formations.

With Raila playing catch-up to DP Ruto in the region, picking a running mate from the mountain will be a monumental boost to the Raila ticket. Analysts agree that were Raila to retain much of his usual vote, he needs only a third of Mt Kenya to clinch the presidency at the first round. However, with possibility of fall-out with Kalonzo and Governor Mutua out, he will need at least half the mountain vote to cushion against drop in lower-Eastern vote. That certainly makes it vital for Raila to pick his running mate from the mountain region.

Then there is the gender factor working in favour of Karua. There is a considerable vote she will attract from across the country and in the Diaspora because of the gender factor, the kind Charity Ngilu attracted in 1997 when she vied for presidency. Karua didn’t bring same excitement when she contested in 2013 because of circumstances at the time which are different in 2022.

Karua’s other plus is she would have the courage to stand up to reactionary forces who may want to capture or dilute Raila’s progressive agenda.

On the negatives, Karua is faulted for playing hard ball. The point of reference is her hard line stand during 2007 post-election mediation and the fact that she walked out of Kibaki government on a matter of principle. But her supporters argue she had no luxury to be soft in the 2007 mediation when the other side too was playing tough and rough. Resigning from Cabinet on a matter of principle is also viewed to be a plus in a country where leaders stick to office even when caught with fingers in the cookie jar.

Raila confidants also say tough as Karua is perceived to be, she enjoys good chemistry with Raila going back to their days in the struggle for multi-party and constitutional reform.

Peter Kenneth’s greatest asset is his closeness to Raila. He has accompanied him to almost every campaign rally in and outside the vast Mt Kenya region. Kenneth is also in the close knit of Raila allies who have been meeting at the Kajiado home of Cotu Secretary General Francis Atwoli to draw strategy.

Second asset on Kenneth side is he has deep pockets and is favourite of the business community supporting Raila presidency. Indeed last week, Kenneth promised to fund Azimio aspirants in his Murang’a home as long as they actively campaign for Raila.

Kenneth weakness is that he doesn’t have peer support inside his Murang’a home and in larger Mt Kenya. 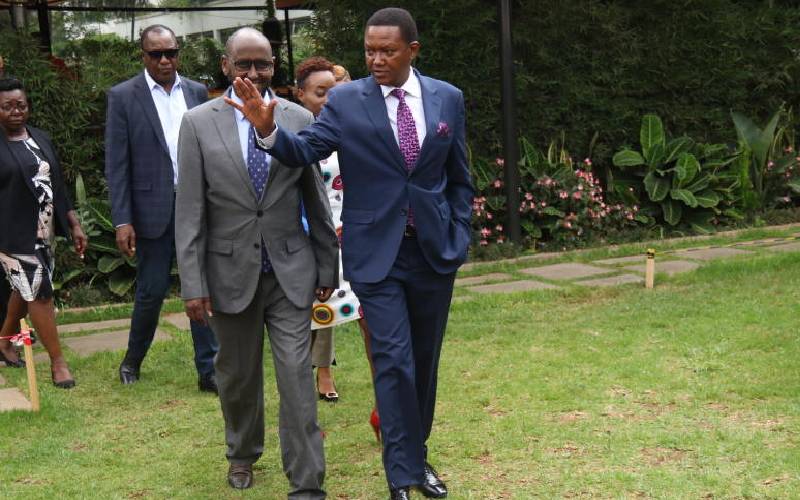 Premium Blow to Raila Odinga as defections rock Azimio ship
Maendeleo Chap Chap and PAA pull out of Azimio claiming that there was secrecy in running affairs of the coalition. Registrar of Political Parties said parties free to exit coalitions.
Politics
By Jacob Ng’etich
3 months ago
.

By Fred Kagonye 6 hrs ago
Martha Karua: Our victory is coming home