The use of symbols is an integral part of political campaigns globally. But the use of live animals in political gatherings tends to rub some Kenyans the wrong way.

Ready-made food and animals have been among the most used symbols through which Kenyans humorously express their support for or dissatisfaction with a particular subject.

Last week, a group of Deputy President William Ruto’s supporters came under fire after they presented him with a goat painted in yellow, green and black, with his name and United Democratic Alliance scribbled on it.

To them, this was a gesture of loyalty and a warm welcome for a guest whom they consider their favourite presidential hopeful.

While the DP warmly received the gift, actions by the youth attracted heavy criticism from some animal rights activists led by the Union of Veterinary Practitioners of Kenya (UVPK).

“The union has noted with concern the rise in cases of cruelty to animals for political reasons. Physical body application of either acrylic or latex paints constitutes cruelty which is punishable by law,” said UVPK Secretary-General Miheso Mulembani.

On October 19, 2021, Ruto, while on a tour in the coastal region, entered Lamu riding on a donkey. Many described it as an imitation of the Biblical triumphant of Jesus entry into Jerusalem.

Although riding on donkeys is a common practice in Lamu, the donkey had UDA party banners tied to its ears and neck, which animal rights activists also took issue with. 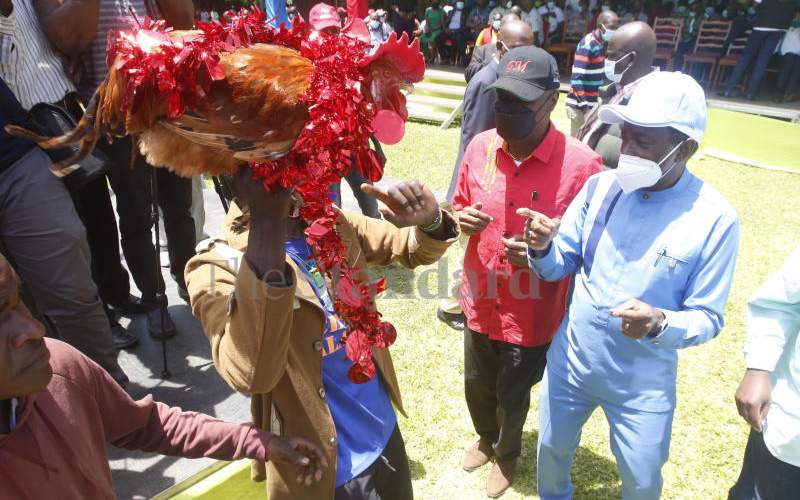 During a One Kenya Alliance (OKA) rally in Kakamega on October 29, 2021, some Kanu supporters turned up with decorated cockerels, a symbol for the party.

The animals and birds during the current political season gained popularity in the run-up to the 2017 general elections.

During the campaigns, a supporter of President Uhuru Kenyatta painted his donkey in red, yellow and black colours, the branding of the Jubilee Party.

Brian Murithi, 24, from Imenti North and his donkey named Karembo became an internet sensation as he traversed the sub-County campaigning for Uhuru ahead of the repeat presidential election.

"I am supporting President Uhuru for his manifesto. My appeal is for the people to support me by providing fodder for the donkey as I move around," said Murithi.

A day to Uhuru's swearing-in for his second term, a man turned up at Kasarani Stadium with his three dogs.

The man had donned the dogs in cloth with Jubilee Party colours and symbols, complete with party miniature flags on the edges.

Such activities rubbed the UVPK members the wrong way, with the union pointing out that the actions result in undue suffering of the animals.

"The animals are often mishandled, deprived of food and water, causing them unnecessary suffering and infuriation. Persons acting in breach of animal welfare and freedoms should be prosecuted," UVPK said.

The 2017 campaigns were also punctuated with calls for the reduction of maize flour prices, which had hit an all-time high. A 2kg packet was retailing at Sh136.

Some Kenyans expressed their frustrations with the hiked prices by carrying cooked ugali to political rallies in protest.

In response, President Kenyatta’s administration announced the subsidization of maize flour prices and directed that the highest price for the 2kg packet be Sh90.

“The subsidized price of maize flour was a political ploy. This is only a campaign gimmick. In the next two months, the prices will shoot up,” former Prime Minister Raila Odinga said after the announcement.

Chemutai told the court that the fight led to stabbing because she was provoked after she found Chepkemoi making love to her husband.

What do Ruto and Gachagua have in common?
;
Feedback