The Orange Democratic Movement (ODM) has threatened to withdraw the Sh153 million offer to its partners after announcing its exit from the troubled National Super Alliance (NASA).

In a National Executive Council (NEC) meeting yesterday, members of the party’s top organ resolved to reconsider the decision to share political parties funding with their coalition partners should they continue chest-thumping for pushing Raila Odinga’s ODM into submission.

It has emerged that Raila made the surprise decision to pull out of the moribund coalition, to engage new players without conditions from his current partners, who have insisted it was time for the former premier to back one of them for the presidency.

Further, Raila is said to be keen on engaging the former NASA partners individually going into the next poll since some of them have already made up their minds. Already, the Amani National Congress (ANC) of Musalia Mudavadi and Wiper of Kalonzo Musyoka’s have resolved to exit the coalition, but are yet to formally write to the Office of the Registrar of Political Parties (ORPP).

At least three parties must exit to collapse the 2017 coalition. “We still hold that NASA is the past. To further demonstrate this point, the NEC of ODM has today resolved to formally exit the NASA coalition,” said Secretary-General Edwin Sifuna.

The party announced plans to embark on building new alliances in the run-up to the 2022 elections.

The Standard has learnt that ODM and Jubilee of President Uhuru Kenyatta have lined up a series of “regional engagements” to galvanise their support base in preparations for the succession contest.

“The NEC has further deliberated on the future of the party and its need to make new friends. We intend to embark on a programme to build new partnerships and extend the ongoing talks with our potential partners to the grassroots. To this end regional meetings and engagements have been planned with like-minded parties,” announced ODM.

Sources said members expressed their disappointment over their partners posturing for a right of their share of the millions from the exchequer. “We have resolved that if they continue with the bravado and complaints that what has been offered to them is not enough then we will just withdraw the offer,” said a top party official.

The Standard learnt that the threat to withdraw the offer to the partner parties was initially included in the official statement by the party, but was edited in the last minute. However, the choice of words in the statement betrayed their disappointment with their now estranged partners.

Sifuna said the party was “dismayed” by utterances by their partners for claiming the offer was a vindication of their long-running grievances in the coalition. “The offer to make certain payments to our former partners was made strictly without prejudice because from a plain reading of the coalition agreement, we owe nothing to our partners,” said the ODM statement. 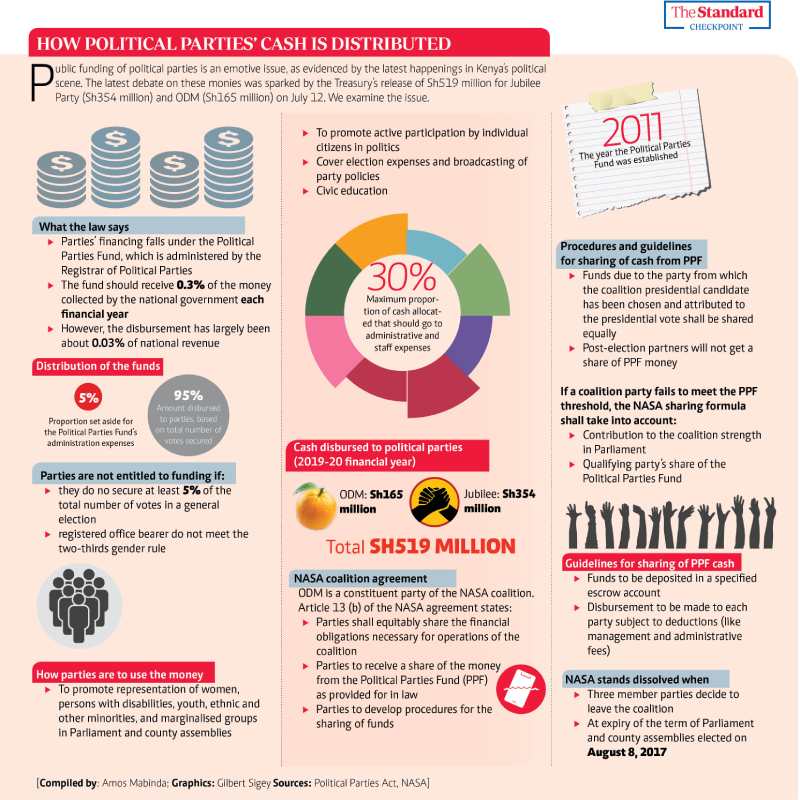 ODM said the long-held position by the partner parties that all monies received by the outfit was shareable equally among all parties in NASA has been dismissed by both the ORPP and the Auditor General.

The party argued that the money it receives is purely out of the number of votes received by its candidates in the gubernatorial, parliamentary and civic Seats and does not include presidential votes. Raila pulled out of the repeat presidential election after the August 2017 poll outcome was annulled by the Supreme Court following a petition by the opposition coalition. “We have in the past encouraged our partners to have their claim processed through official channels the ORPP or the courts but for reasons best known to them they declined instead opting to engage Party Leader informally,” protested ODM.

Sifuna said Raila participated in talks over the contested monies with utmost good faith and with an “eye on settling the matter once and for all.”

“The offer made must be seen from this perspective, an ex gratia payment made in consideration of our long-standing relationship and friendship,” added the statement.

Currently, only Jubilee and ODM are entitled to funding by the exchequer.

ODM deputy party leader and Kakamega Governor Wycliffe Oparanya said the constant wrangles in the coalition were not good for Raila’s ambition. He said by exiting, it would be easier to engage the politicians individually and not as a group, suggesting that some partners may have made up their mind not to back Raila again.

“These wrangles are not healthy for us as a party. So we have decided to come out and rethink our new partnership,” said Oparanya.

Party chairman John Mbadi said they have lined up a series of regional engagements starting next week Friday. The first meeting will take place in Kisii on August 6, then Kakamega. President Kenyatta is also expected at the rallies.

“We are not chasing away anyone and we are also not ruling out working with anyone,” he added.

Although Caroline Kangogo was a serving officer when she died, Kangogo was not accorded the honour traditionally meant for dead police officers.

A digital platform will be set up to allow Kenyans who were erroneously registered to political parties recently to resign from them.
Share this story

By Stephen Nzioka and Julius Chepkwony | 6 hours ago