By Steve Mkawale and Kennedy Gachuhi | 1yr ago 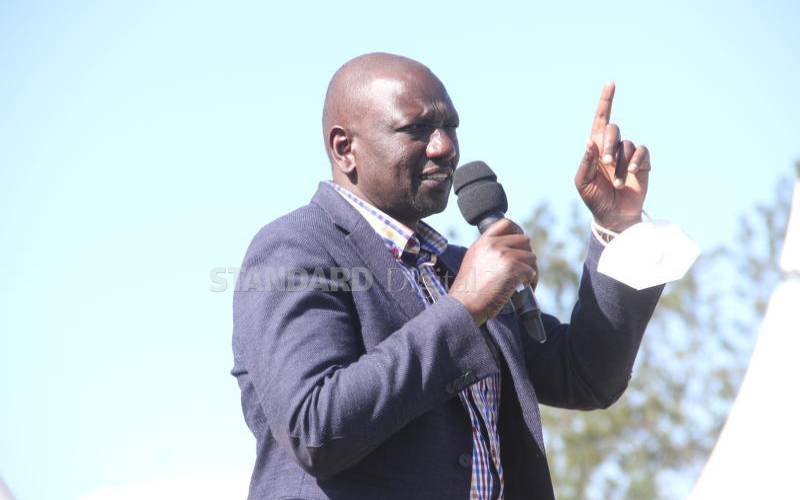 Deputy President William Ruto (pictured) will have the exclusive right to choose his running mate if he opts to run for the presidency on United Democratic Alliance (UDA) party ticket.

According to the UDA constitution, a presidential nominee has the exclusive right to pick a running mate after getting the nod of the National Delegates Conference (NDC).

This is unlike in the Jubilee constitution that requires the presidential candidate and his/her running mate to be nominated jointly at the NDC.

The UDA party leader will not be the automatic presidential candidate. The constitution allows members to pick anyone to fly the party’s flag.

The constitution further states that one shall be required to obtain more than 50 per cent of the NDC votes to be the presidential candidate.

“Where, however, no contestant obtains more than 50 per cent of the votes cast, there shall be a re-run between the first two contestants and the contestant with a simple majority shall be the party’s presidential candidate,” it reads in part.

Legislators said this will ensure inclusivity and equal representation of leaders from across the country.

Each of the deputies will have a clearly defined role — from political affairs, administration, operations, programmes, fundraising and strategy.

Members have a bigger say in managing party affairs to avoid concentration of powers at the top.

The party constitution gives members powers to petition for a Special Delegates Convention while the parliamentary leadership can hold meetings which do not have to attended by the party leader.

This seems to have been informed by what the DP and his allies have gone through in the ruling coalition where most of the Tangatanga leaders have been sidelined, ejected from parliamentary committees and even stripped off their leadership roles in the Jubilee Party.

The constitution has put more emphasis on the participation of ordinary members running its affairs from the polling stations all the way to the national level.

The law seems to borrow from Ruto’s mantra of “ Kazi ni Kazi”- putting the interests of mwananchi first.

Analysts say the constitution gives the clearest indication yet that Ruto will use the UDA vehicle in elections to succeed President Uhuru Kenyatta.

“The policies, slogan, the symbol and the way that constitution reads is a clear reflection of Ruto’s manifesto for Kenya as he seeks the presidency in 2022,” said Gitile Naituli, a professor of management and leadership at Multimedia University.

Prof Naituli observes that Ruto’s tribulations can be traced back to failure by Jubilee constitution to empower members to hold its leadership to account.

No power to suspend

“Members of the County Disciplinary Committee shall be appointed by the secretary general of the party from a list presented by the National Executive Committee,” the Jubilee constitution states.

“The County Disciplinary Committee shall have the power to fine, remove the whip, suspend, or recommend expulsion of any member or office bearer in a county, constituency, ward and polling centre committee.

“Such suspension or recommendation for expulsion shall be reported to the National Executive Committee for adoption, ratification or variation,” Jubilee constitution states.

That is different from UDA’s constitution which states that all discipline matters can only be handled by the national committee.

Although Jubilee and UDA constitutions provide that the parties’ dissolution must be approved by at least two thirds of the NDC, Jubilee party is not specific on how the process is to be conducted.

“A resolution to dissolve the party shall be supported by at least two-thirds of the delegates eligible to attend and vote. Voting shall be by secret ballot only,” UDA constitution states. The secret ballot is meant to save members from being influenced to vote in a particular way.

By Jacob Ng'etich and Titus Too 18 mins ago
Premium Ruto-Raila face off in new battle of wits, who blinks first?

By Biketi Kikechi 18 mins ago
Premium Spoiling for a fight: Have Ruto, Gachagua fallen into Raila's trap?

By Brian Otieno 18 mins ago
Premium Bully or pushover? Inside Chebukati's six-year tenure at IEBC