House calls for probe of PS and officials over Sh7b deal

A report by the National Assembly’s Public Accounts Committee (PAC) has recommended that the Directorate of Criminal Investigations (DCI) probes the role of Mr Korir – then Health PS – for possible criminal culpability.

The report tabled on Tuesday for adoption by the House also recommended that the Ethics and Anti-Corruption Commission (EACC) investigates directors of a firm in an Sh300 million deal with the Sports ministry.

M/S Auditel Engineering and Services was contracted to install security equipment in various stadia as the country prepared for the African Nations Championship (Chan) 2018.

“The EACC should within three months of tabling and adoption of this report, initiate a forensic investigation into the procurement of the CT Scans to establish whether there were due diligence and fidelity to the Constitution, the Public Procurement and Disposal Act of 2015,” recommends the report by the committee.

“The DCI, within three months upon adoption of this report, to initiate an investigation into the roles played by Mr Julius Korir and other Ministry of Health officers in the procurement of the CT scans intending to establish possible criminal culpability,” it adds.

The committee chaired by Ugunja MP Opiyo Wandayi wants the DCI to make appropriate recommendations to the Director of Public Prosecutions (DPP).

The committee observed that the Government-to-Government procurement was not among the methods of procurement provided for under Section 92 of the Public Procurement and Assets Disposal Act.

It also emerged that a delegation of government officials was hosted by Neusoft Medical Systems Co Ltd, that they had gone to do due diligence on.

Korir was in the delegation that travelled to China although he was not part of the Due Diligence Committee.

The health ministry spent Sh1,740,000,000 under specialised plant equipment and machinery to pay for CT Scans. The amount was 20 per cent of the contract value paid as a condition precedent for the Government of Kenya to obtain a loan of Sh7 billion from the Government of China to finance the purchase of the CT scans.

On the contract for the installation of security equipment in various stadia, the committee established that upon receiving the sum of Sh330,537,997, M/S Auditel Engineering and Services ‘literally disappeared into thin air.

The committee’s efforts to have the firm appear before it bore no fruit after they failed to locate its offices locally and abroad.

“The EACC should, within three months of tabling and adoption of this report by the House, initiate a comprehensive investigation into M/S Auditel Engineering and Services and all its directors over their engagement with the State Department for Sports Development on the questionable contract,” recommends the report.

The committee further wants that upon establishment of criminal culpability the matter should be referred to the DPP for appropriate action.

Kenya was stripped of the right to host Chan due to incomplete refurbishment of the stadiums and heightened political temperatures following the disputed 2017 presidential election. 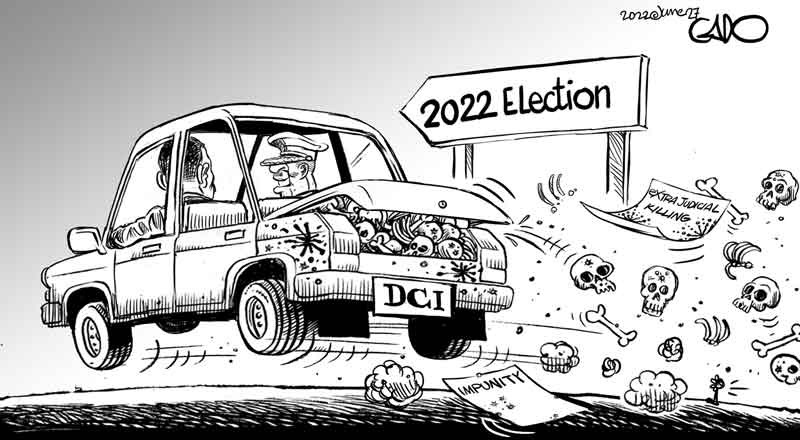 Premium DCI Twitter: Where suspects are charged, declared guilty online
With a following of 1.1 million, it's a thin line between bursting crime and charging suspects on social media court. Lawyers say there should be balance between informing and rights of a suspect
National
By Daniel Wesangula
4 days ago

By Nathan Ochunge 3 10 hours ago
Premium Winnie Odinga: Why Martha Karua's nomination is a big win for women