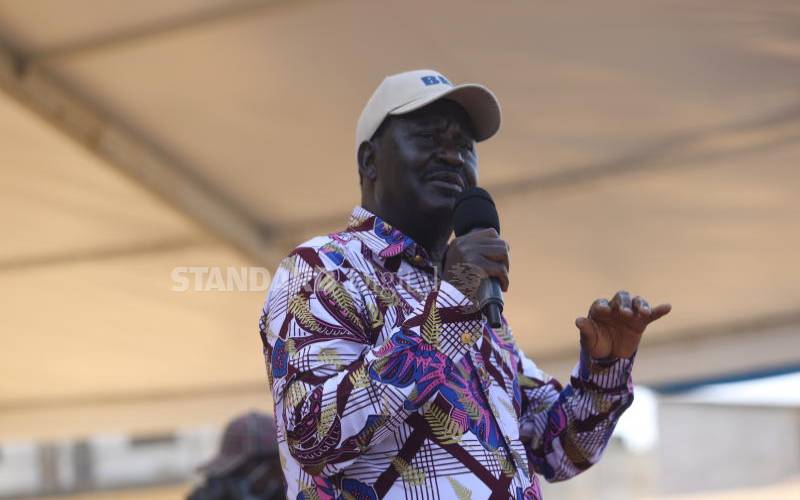 ODM leader Raila Odinga (pictured) could silently be putting up a new political formation awaiting passage of the Constitution of Kenya (Amendment) Bill, 2020, at the referendum before shifting gears to focus on 2022 elections.

Although he has not officially announced he will vie for the top seat, Raila is regarded as a top contender due to the huge grassroots support he enjoys across the country.

In the past few weeks, Raila has made a passionate appeal to Kenyans to tone down on politics until after the Building Bridges Initiative (BBI) process is concluded.

His remarks came as NASA co-principals Kalonzo Musyoka (Wiper Party) and Musalia Mudavadi (ANC) called on the ODM leader to support them because they backed him in previous elections.

However, Raila and ODM have insisted that Mudavadi, Kalonzo and Moses Wetang'ula (Ford Kenya) led to NASA’s collapse after they skipped his swearing-in ceremony as the people's president after the contested 2017 presidential election.

The remarks were followed by Raila’s extensive tour of Kilifi, Mombasa, Taita Taveta and Kwale counties.

Raila seems to be targeting key individuals from each of the regions he has visited and continues to visit as he seeks to consolidate his support ahead of 2022.

At the Coast, Raila told residents that BBI will give the region more goodies.

“I will visit all parts of the Coast. I will attentively listen to the issues you raise. I am the right person to end the region's years of economic hardship,” he said.

However, Raila faces a split in the region as Kilifi Governor Amason Kingi pushes for formation of a regional party. Kingi and some Coast leaders have said they are in the process of forming a Coast party, which they said will be unveiled soon.

Kingi has also publicly declared that he is on his way out of ODM.

Raila has said all leaders who have shifted their loyalty to other parties should resign and seek fresh mandate through political parties of their choice.

"We should practice the politics of principles. When you have differed with your party, you resign and seek re-election using another party. That is what I did in 1997," said Raila.

Kingi hails from the populous Miji Kenda community which has been yearning to fill the shoes of its former top political leaders Katana Ngala and Karisa Maitha.

“He is weighing his options. He has a way he does his political engagements,” he says.

According to Onyonka, there will be several formations post-BBI. “At the end, we are likely to have two or three formations ahead of the General Election. Raila could be comfortable with the Prime Minister’s position because he has held the same office before.”

He explains that Raila has an advantage to go for any position but not as a deputy president. “I won’t be shocked that some individuals making political noise at the moment will even join the deputy president. There is even a possibility of Ruto working with Raila,” Onyonka said.

The Kitutu Chache South legislator sees another possibility of Raila forming a totally different political formation that can be accepted by Kenyans across the board.

“If Raila gets even three quarters of Mt Kenya votes and just a few from other regions apart from his Nyanza base, he will easily become president. That is why he needs Uhuru to back him,” Kindiki said.

Should Raila run, Kindiki says, he would be required to either get a running mate from Mt Kenya backed by Uhuru or reassure the president of a prime minister slot in next government if the BBI passes, to win Mt Kenya backing.

“All eyes are now set on Central Kenya which is likely to vote as a bloc,” Kindiki said.

Ruto has been keen on consolidating support in parts of the South Nyanza region including Migori, Kisii and Nyamira counties.

Despite Ruto’s inroads to the region, Raila still maintains a close working relationship with top leaders from the area including Kisii Governor James Ongwae, senators Sam Ongeri and Okongo Omogeni.

His improved working relationship with Interior Cabinet Secretary Fred Matiang'i appears to have earned him more political mileage in the region.

The ODM leader has gained some ground in Central and areas that have in past elections voted against him. He has gained new political friends in the region in the name of nominated MP Maina Kamanda and Jubilee Chairman David Murathe, a close confidant of President Kenyatta.

Raila is also said to be working for a partnership with former presidential candidate Peter Kenneth and Kirinyaga Governor Anne Waiguru.

The former PM held a number of meetings with Waiguru last year and has been frequently meeting Kenneth including at Cotu boss Francis Atwoli’s home in Kajiado.

Agriculture Minister Peter Munya who is seen as a key backer of the BBI in the region is also seen as crucial in swaying the area’s votes.

In Western region, Raila enjoys the support of Kakamega, Busia and Bungoma governors Wycliffe Oparanya, Sospeter Ojaamong and Wycliffe Wangamati respectively. He also has the support of Atwoli, Busia Senator Amos Wako as well some senior government officials who joined him after the handshake.

Former UNCTAD boss Mukhisa Kituyi, during his homecoming on March 6, urged leaders in Western to work with President Kenyatta and Raila to ascend to power.

Dr Kituyi also told off allies of Ruto, saying they were leading their people astray.

The former UNCTAD secretary-general had been put on the spot earlier in the week when listeners called local vernacular radio stations to ask whether he was 'Raila's project'.

"It is said that Raila called us for lunch. No, in fact, it is Prof Kivutha Kibwana and I who invited Raila for lunch and not the other way round. He sat at the table as a second liberator in the spirit of liberating the nation and not as the ODM leader,” Kituyi said.

"We, the second liberators, have taken the back seat in the running of this nation but have realised that was a mistake. The nation is headed in the wrong direction and it is time to take control,” said Kituyi.

In the Rift Valley, Raila has been meeting with some high-ranking professionals to lay ground for his next move. On March 6, he received a delegation from Narok at his Karen home in Nairobi.

"They brought me up to speed on the happenings in their county," Raila said at the time of the visit.

Raila has further held discussions with Kajiado Governor Joseph ole Lenku and other leaders from the larger Maa community as he markets himself as champion of their interests.

By Phares Mutembei | 21 hours ago