UhuRuto fallout complete as DP takes on his boss

By Moses Nyamori | 2yrs ago

In what is shaping up to be the final Jubilee fallout, Deputy President William Ruto gathered his troops at a city church to take on their party boss.

What elicited the dramatic response was President Uhuru Kenyatta's Saturday's rhetorical question on two communities that have ruled Kenya since independence, while he was dismissing the hustler versus dynasties narrative spearheaded by Ruto and his allies.

The president said if the thinking was that some individuals should not run for political office because of their family background, then he could as well say that the same should apply to the two communities that have ruled the country since independence.

“If that is the thinking or the logic, then even I can stand here and say that it is only two communities that have ruled the country and maybe it is time for other communities to rule,” said Uhuru.

Yesterday, Ruto’s allies took Uhuru’s rhetoric for a statement of fact, with the DP describing the sentiments as overtaken by events and degenerative. His troops had earlier on criticised the statement, expressing shock that it had come from their leader.

“We cannot degenerate (to this level) because when I supported Uhuru, it was not because of his tribe but his agenda. I supported him knowing very well that Kibaki was Kikuyu. It was deliberate so that we end this politics of tribe and hatred,” said the DP.

Speaking at the House of Hope Church in Kayole, Ruto told of how some of the political leaders tried to stop him from backing the president because he was the son of the founding Head of State, Mzee Jomo Kenyatta.

“Many people, including those who were in Western yesterday (Saturday), questioned why I was supporting him when he was from the same tribe as Kibaki. Some were telling me not to support Uhuru because he’s a son of a former president,” he said.

At the same function, Ruto unveiled former Starehe MP Margaret Wanjiru as the “hustler candidate” for the Nairobi gubernatorial seat on a United Democratic Alliance ticket, clearly indicating his association with the newly renamed party.

At the Sabatia burial on Saturday, a furious President Kenyatta said he had heard some people in Msambweni said people were tired with the leadership “of this or that family”. 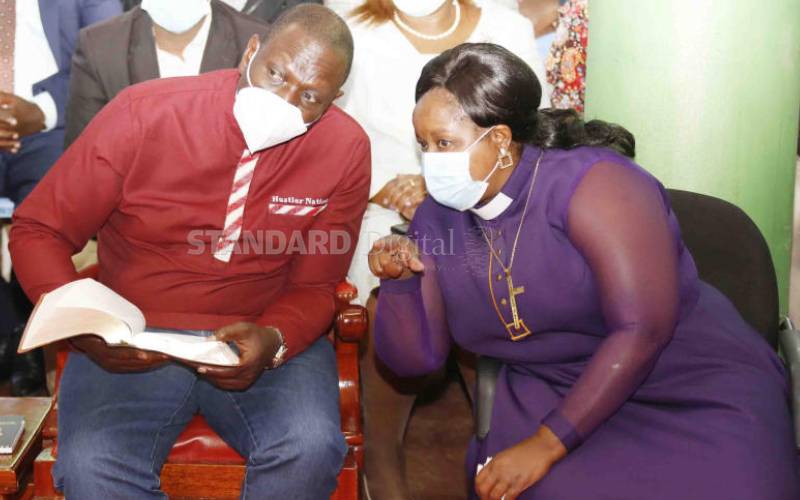 “If you are tired with the leadership you can go back to the ballot. Remember it is the voter that decides at the ballot. Some of the people making the remarks won their leadership positions not on their votes, but mine,” he said.

Answering Cotu boss Francis Atwoli who had dared him to crack the whip on his Central base, Kenyatta said it was all but a question of time.

“When you see a lion that has been rained on, do not mistake it for a cat. Everything has its timing. I am in charge of this government and I am in control of what goes on in there. I don’t want someone to lecture me. I know where I am and I am very clear about where I am going,” said the president.

“I have been saying these things but you people have not been taking me seriously. The leadership of this country cannot be a ping-pong game between two communities. What will become of the others,” Murathe asked.

But Ruto and his allies yesterday termed the remarks as tribal while vowing to continue with the hustler narrative. Unlike before when Ruto let his allies launch the attack as he preached development, yesterday he lead the charge.

He claimed that some of his lieutenants have become targets of State-sponsored threats and blackmail and that his side will not be intimidated, but will sustain the narrative until all Kenyans are included in national conversations around power structure and positions.

“If this conversation is too difficult for you, then my friend, find something else because we will not stop,” he said.

Ichung’wah said he was shocked that the country can be dragged into such a conversation even after it went through the post-election chaos of 2007 that saw Uhuru and Ruto charged with crimes against humanity at the International Criminal Court (ICC).

Gachagua told off Atwoli for advising the president to crack the whip on those opposed to the Building Bridges Initiative (BBI) in his Central region backyard.

He claimed some of Ruto's allies have been targeted by State machinery and there was nothing left that could be used to blackmail them into backing the proposed constitutional changes.

He said the country was more concerned with how the Jubilee administration could take the country back to the economic status Kibaki left it.

Mwaura said it was time to end politics of betrayal by backing the DP as per the Jubilee agreement that the two leaders support each other to rule for 10 years.

“Joining the hustler nation in support of Deputy President William Ruto for 2022 is as per the agreement in Jubilee party programme,” said Mwaura.

Osoro said such remarks on tribe risked plunging the country into yet post-poll chaos. The MP said the discussion about who becomes the next president should be on the basis of their agenda for the country and not about their communities.

He said the remarks suggested that those from the two communities do not qualify to run for president.