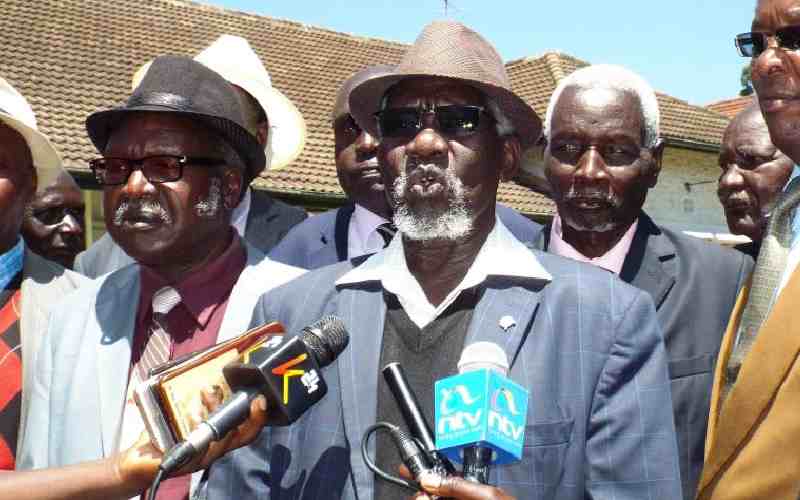 Claims by one of the 14-member taskforce that steered the Building Bridges Initiative (BBI) Maj (Rtd) John Seii (pictured) that the final report was tampered with continue to elicit reactions from political players.

Seii  Saturday said the taskforce members were asked to sign the final draft before they had the chance to read it.

Speaking to Radio Maisha on Saturday, he said they were called to sign and they did so in trust.

He adds that he was surprised by some of the content, such as the increased positions for leaders when Kenyans are already struggling to maintain the ballooning wage bill.

According to Seii, the parliamentarians meeting Naivasha was done hurriedly and those with different views were not allowed an opportunity to contribute.

But he maintains that raising such issues does not mean he opposes the BBI. Seii promised to issue an official statement later to clarify his position.
Seii, a former military Major and Chairman Emeritus of the Kalenjin Council of Elders (Myoot), claimed they were told there was no time and hurriedly asked to append their signatures.

This, he claimed in a vernacular radio station, was on a Friday, ahead of the handover of the report the following Tuesday during Mashujaa Day in Kisii to President Uhuru Kenyatta and ODM leader Raila Odinga.

Seii disowned proposals for the creation of additional 70 seats and the position of Prime Minister among others contained in the final report as not part of the nine thematic areas discussed during their sittings across the 47 counties.

Kanu official Paul Kibet and residents of Eldoret Benjamin Letting and Moses Maina dismissed Seii and said he "should have resigned before signing the document".

Kibet, the Elgeyo Marakwet County Kanu chairman, said it is surprising that Seii participated during the handover of the report only to dismiss it later.

“None of the other 13 members of the taskforce have come out to corroborate the claims made by Seii. He is discrediting a process that he participated in,” stated Kibet.

He challenged Seii to go public with copies of both the initial BBI report and the final draft to enable citizens make an independent judgment.

“Neither was the Keiyo nor the Kalenjin community consulted when Maj (Rtd) Seii was named a member of the BBI steering committee. An alternative elder could have been proposed,” said Kibet who also called on members of the National Council of Elders to be impartial in their operations.

Letting said: “Such unsubstantiated utterances by Seii may discredit the credibility of the BBI report. He should desist from such remarks.”

Letting added that Seii should have raised the concerns long before the document was handed over.

“As residents of Uasin Gishu, we shall support the BBI report the way it is and popularise it at the grassroots. We call for more copies to be availed by the authorities so that residents can acquaint themselves with the proposals,” added Letting.

Maina said the timing of Seii’s remarks is ‘suspicious.’

“The Kalenjin community will not go against the proposed constitutional amendments in the same way it did during the 2010 national referendum that yielded the current constitution,” said Maina.

Real Madrid midfielder Casemiro and forward Eden Hazard have tested positive for COVID-19 ahead of their La Liga clash at Valencia, the Spanish champi

By Gilda Naibei | 33 minutes ago

By Standard Team | 33 minutes ago

By Allan Mungai | 33 minutes ago

By Brian Otieno | 33 minutes ago