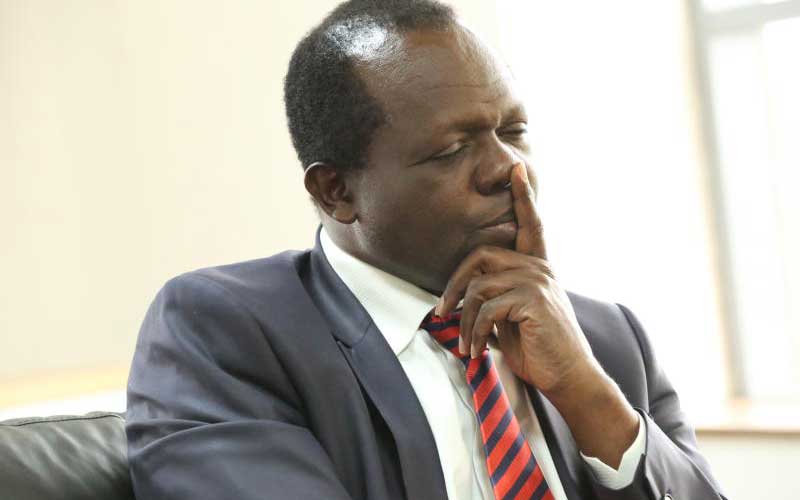 Jubilee Secretary General Raphael Tuju (pictured) has dodged questions on whether or not the Building Bridges Initiative (BBI) Report was altered following allegations by a member of the taskforce that they were ambushed to append their signatures on the document without reviewing the final draft.

In a move that could bring to test the credibility of the report, Maj (Rtd) John Seii said officials of the 14-member taskforce were shocked after they were called on a Friday and asked to sign the prepared draft that was expected to be handed over to the two proponents of the initiative.

“We had no time to go through the document and the 14 of us looked at each other in total disbelief when we were asked to sign the final BBI draft that was set to be handed over to President Uhuru Kenyatta and ODM leader Raila Odinga,” said Seii.

Seii added: “The document had been well-prepared and what was left is for us to sign. I had expected we be called on a Wednesday so that we can review its content first. The experts, however, told us nothing had been changed, and we had to sign in trust.”

During a morning show at a vernacular radio station on Thursday, Seii further cast doubt on the credibility of the Report saying that when the final draft was taken to Naivasha, “some issues that were never contained in the report also emerged.”

“Under normal circumstances, you don’t sign a document that carries such weight without going through it.  But because senior people were present and they assured us that everything is okay, we took for granted that we will sign the document,” said Seii during a TV interview.

The Jubilee Secretary General overlooked direct questions about the credibility of the Report and instead drew attention to various the provisions within the document during the Friday afternoon interview on KTN News.

On the allegations that the taskforce was rushed to sign the document without reviewing it, Tuju was asked directly, “Was the BBI Report doctored?” To which he responded in part, “These are big issues, it's not about signatures.”

Tuju then highlighted past poll related violence and talked about the provision in the BBI that caters for peaceful elections.

“The BBI stems from the handshake the way the handshake stems from the realisation that we don't need any more of this (pre, during and post-election) violence. These are big issues, it's not about signatures. … What we want is to ensure that every election cycle, we don't have this kind of violence. ... When we have violence in elections any of us can fall victim. What we need is a structure that ensures that after every election Kenyans can live in peace,” said Tuju.

On the issue of inclusivity of views when working on the report, Tuju said, “This matter was open to Kenyans for the last two years to bring in their ideas.”

“I have ideas and several other people have ideas, but the most important is that what is in this document which will ensure that we don't have violence during, after or before elections. It is not what I think or what anybody else thinks, it is, what are the provisions there? And the provisions there do not necessarily have to agree with what I think. What is important is that they are provisions which make sense and Kenyans were given a chance to contribute.”

Major (Rtd) John Seii who is part of the 14-member task force that was collecting Kenyans views on the BBI said some of the sweeping proposals were strange to them because they never featured in their deliberations. For instance, the introduction of 70 more constituencies because at the time, the conversation among Kenyans was 'Punguza Mzigo' which sought to reduce the ballooning wage bill in the country.

To this, Tuju said, “This is not about scoring debating points. I was in parliament in 2007 when we had the post-election violence. The ceasefire made this country have a total of 43 ministers, and we had 86 assistant ministers. The government was made up of more than 120 people. That was extremely expensive for this country. But if kit is what brought peace, it was worth it. We can't be blowing hot and cold and Kenyans have to accept that there's a cost of having peace and having representation.”

“We can get into the business of scoring points but the most important thing is to ensure that we have provisions that will enable us to live in peace.”

“There are certain provisions in the BBI which personally I have my doubts about; I may feel some anxiety or I may have some reservations. But at the end of the day, you can't have everything, it's a compromise document.”

“In the US, they have had more than 30 amendments to their constitution. This is going to be our first amendment of the 2010 Constitution. We can have a second, third ... tenth amendment. You can never have something perfect. But we need this BBI to go through if it can assure us that in 2022, there will be no more Baby Pendos. There'll be no more Kiambaa Church.”

Why the BBI rush?

“There is a definite rush. If you look at the timeline for us to pass this thing, it has to happen before August because after August will be exactly one year to an election. And there are those distractors to this particular process who would want us to have every excuse to make sure that we don't pass this thing by August next year then it means it's too late,” said Tuju.

He then drew focus on the two other “elephants in the house”, two-thirds gender rule and economic crimes.

“This BBI is also making provisions for two things. A definite pathway for the two-thirds (gender rule) to be included in our constitution so that this matter can be put to rest once and for all. This BBI report gives us a pathway to resolve that problem politically, through a referendum and Kenyans will be able to resolve the problem that has been created by that provision in our 2010 constitution,” said Tuju.

He added: The elephant in the house that all these people who are talking against this BBI do not want you to know ... For the first time in our constitution, we are going to make a provision very much like we've made a provision in the electoral laws that you have to resolve the issues of corruption in six months, maximum 12 months if we put in the appellate processes. ... I've not heard any of these people who are talking about an enlarged Executive addressing this particular robust provision which is in our constitution, which will save us so much money. Much much more than anybody can be talking about the provisions of an enlarged Executive.

“And I would want any of them to challenge what I'm saying,” he urged.

This is following the trend of economic crimes cases dragging on for years in court without resolution.

Tuju was again pressed on the credibility of the BBI Report in light of the doctoring allegations - Can we solve corruption through a corrupted process?

He again zeroed in on economic crimes saying, "Some of the deliberations these people would like us to have is so that we remove the provisions which deal with addressing corruption. We want a corruption case if it's economic crime Sh100 million, Sh200 million (sic) it should be resolved in six months. Either somebody is guilty - they go to jail, or they are acquitted - there is not enough evidence, or they are innocent.”

“You want us to sit with these corrupt fellows and thieves go discuss with them how they want to be tried? It's not gonna (sic) work. And we will never agree. Let us go to the Kenyan people. Let the Kenyan people decide. Because these guys are not going to agree.”

“Do you think that these corrupt fellows, these thieves are going to reach a consensus with us on how provisions should be made to ensure that they are tried on time? Let us go to the people. Let the people decide what they want,” he concluded the interview without giving a clear answer on whether or not the BBI Report was altered as alleged by taskforce member Maj (Rtd) John Seii.

Parties ride on BBI wave to prepare for 2022 elections