A member of the Building Bridges Initiative (BBI) taskforce has claimed the team did not review the final draft and were ambushed to append their signatures on the report.

In a move that could bring to test the credibility of the report, Maj (Rtd) John Seii said officials of the 14-member taskforce were shocked after they were called on a Friday and asked to sign the prepared draft that was expected to be handed over to the two proponents of the initiative.

“We had no time to go through the document and the 14 of us looked at each other in total disbelief when we were asked to sign the final BBI draft that was set to be handed over to President Uhuru Kenyatta and ODM leader Raila Odinga,” said Seii.

He said they ought to have been called at least on a Wednesday for them to have more time to go through the final draft before signing it.

Seii added: “The document had been well-prepared and what was left is for us to sign. I had expected we be called on a Wednesday so that we can review its content first. The experts, however, told us nothing had been changed, and we had to sign in trust.”

Seii, who spoke on a local vernacular station yesterday, said the team of experts told the 14-member taskforce that they were respected and nothing had been changed.

“One member declined to sign and it took the team of experts time to convince before the entire team penned their signatures,” Seii said of the document that was officially handed to Uhuru and Raila in Kisii during Mashujaa Day celebrations.

Seii, the Emeritus chair of the Kalenjin Council of Elders (Myoot), said the original document that had been prepared and launched in Bomas in November 2019 had been summarised.

Kenyans, he said, should have been given the initial report that had enough ‘flesh’ that could enable the ordinary citizen to read and understand the document before making any decision.

The retired soldier explained that following Uhuru and Raila’s handshake, the 14-member BBI team was tasked to tour the 47 counties to collect Kenyans' views and concerns within nine thematic areas that would solidify unity in the country.

“From June 2018, we embarked on the task and Kenyans were guided to contribute on the nine pillars that included devolution, equity in share of national revenues, rights, and containing post-election violence among others,” he said.

Commissioners and MPs, he said, were charged with the responsibility of mobilising residents during sittings. Each county, he said, presented at least 120 in attendance and no constituency across the country was left out.

“We noted that a majority of residents did not have a prior preparation to present their views on the thematic issues. They gave personal views, most of which, were irrelevant in preparing the report,” said Seii during the morning talk show.

“The summary of the report was read out to Kenyans during the Bomas launch. It could have been good if it was passed the way it was and experts only involved in identifying areas along Constitution, legislation and policy,” he said, noting that no much issues could have emerged.

Seii said the decision to put the document back to the people for validation "could have started the problem with the possibility of sneaking some issues into the report."

He said the decision to take back the document saw an emergence of tours to parts of the country including Kisii, Coast, Kakamega before the Coronavirus pandemic disrupted them with the planned Nakuru tour being called off.

He said a team of 35 experts had been picked on top of the 14 taskforce members and two members of the secretariat to work on the document during validation process.

“An introduction was done and our chairman Senator Yussuf Haji asked the experts to team work with the taskforce in preparing a good document for the country. The 35 experts were then reduced to 18 who later prepared the summarised final draft,” said Seii.

He further expressed shock saying “the final draft was again taken to Naivasha, where some issues that were never contained in the report also emerged.”

The taskforce, he said, had recommended for a robust conversation where no Kenyan should be dismissed on the views they present.

He said the 14-member taskforce made recommendations for inclusivity in line of youth, women, people living with disabilities and all communities in cosmopolitan counties.

“At national level, it was recommended that a party leader who emerged second be co-opted in National assembly and be given a full office of official opposition leader who will make a shadow cabinet. If a winner garners 52 percent, we cannot ignore somebody who has 48 per cent of the votes if we are to build unity,” he said. 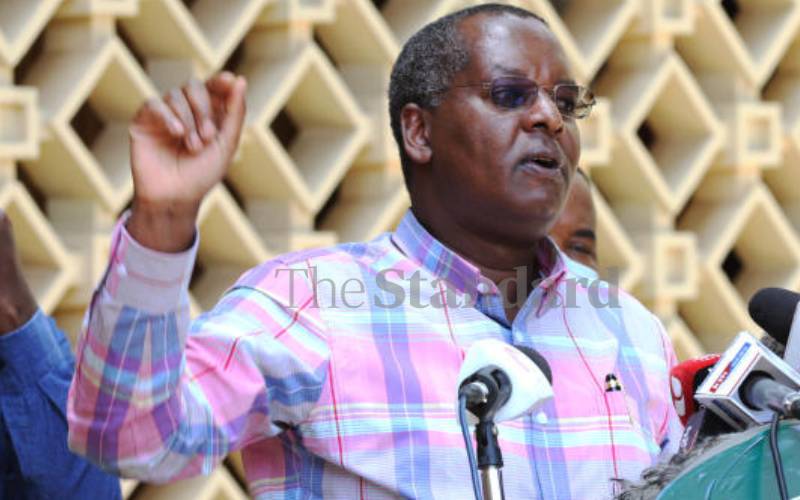 By Betty Njeru and Moses Nyamori | 9 hours ago