In a statement yesterday, Chebukati (pictured) said the commission’s attention has been drawn to a statement by ODM leader Raila Odinga on Twitter that the upcoming referendum cannot cost Sh14 billion.

Raila has maintained that the referendum cannot cost more than Sh2 billion adding that elections have become one of the major avenues for ripping off the country through various schemes.

Chebukati said, "The commission considers the statement very unfortunate and lacks objectivity and understanding of the conduct of elections."

The estimated figure of Sh14 billion given to the Public Accounts Committee (PAC) in response to a question by a member of PAC was informed by historical data and previous experience in managing elections in the country, the IEBC boss said.

The table below shows historical-comparative costs and estimate of what the upcoming referendum may cost:- 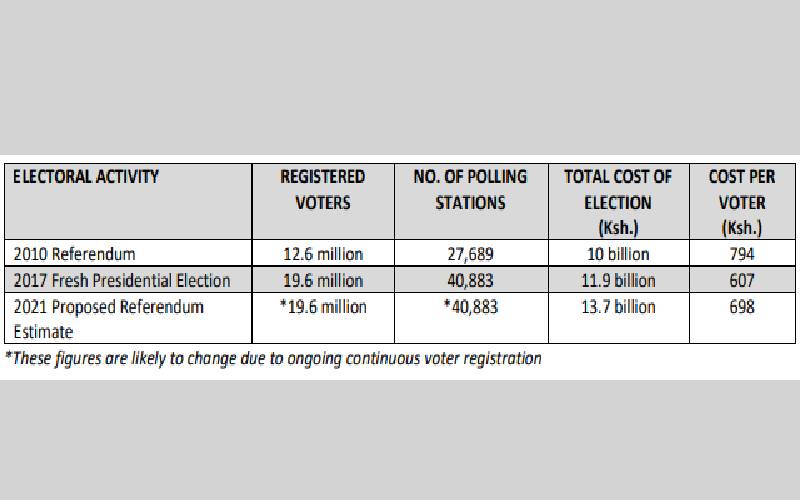 The table shows that the country spent Sh10 billion in conducting the 2010 referendum, under Raila's watch as Prime Minister, which Chebukati says is "a fact conveniently forgotten".  The cost per voter then was Sh794.

Chebukati went on, "At the time, the figures never attracted offensive statements from Raila. It is disingenuous for him to cast such aspersion without seeking clarifications from the commission".

In the 2017 Fresh Presidential Election, which is a single ballot election like a referendum; it cost the country about Sh12 billion. The proposed referendum to be conducted sometime in 2021 is estimated to cost Sh14 billion, having factored all major cost drivers such as technology, ballot papers, temporary poll officials and security, among others, Chebukati said.

In addition, the cost of conducting elections under Covid-19 environment is included.

Chebukati added that the commission will prepare a detailed budget once it receives a notification to conduct a referendum and such a budget will be presented to relevant institutions for scrutiny and approval.

Raila described the projected Sh14 billion referendum budget as outrageous and enough reason to have the current electoral commission disbanded.

Marjan told MPs that the commission calculated the cost based on the 2017 General Election’s 19.6 million voter register.

?“We have already sat down and asked ourselves what is required for the exercise. It will cost about Sh14 billion though we are still fine-tuning that,” said Marjan, adding: “That is an estimate which is based on the 19.6 million registered voters, but the number may have increased because of the continuous listing of new voters".

But Raila said the projection was “the latest indication that the electoral body and the entire election management must be overhauled and streamlined”.

The BBI report has recommended a fresh reconstitution of the agency ahead of the 2022 General Election.

“The Sh14 billion the IEBC is talking about is not only outrageous but also a manifestation of the institution’s insensitivity to the changes Kenyans are crying for in the management of public affairs.”

Raila said the country was not in the mood to allow such impunity to continue being perpetuated in the BBI project, which is meant to bring sanity in the electoral process.

The opposition chief suggested that they pick a team to sit with Wafula Chebukati-led commission to ensure “a cost-effective referendum exercise and elections”.

He said it appeared that the commission was determined never to develop an operational performance that contains costs.