By Roselyne Obala and Wilfred Ayaga | 2yrs ago 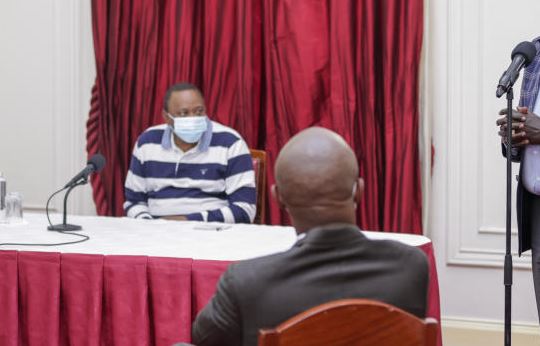 In the clearest indication yet of the looming constitutional changes, President Uhuru Kenyatta (pictured) yesterday appealed to MPs to support the Building Bridges Initiative (BBI) report when it is tabled in Parliament.

The president and ODM leader Raila Odinga appeared to be reading from the same script, with the opposition leader saying Kenyans should brace themselves for intense mobilisation to change the Constitution through BBI.

“Our people should prepare. We are preparing for the future and we will blow the whistle very soon. It is only a few days before we bring reggae back,” said Raila. (See story opposite page)

Raila said the initiative he started with the president will be instrumental in addressing some of the problems the country has faced since independence.

But as Uhuru drummed up support for BBI and urged politicians to tone down their campaigns ahead of 2022 elections, his deputy William Ruto continued with his countrywide tour, dismissing calls for constitutional reforms. (See story on opposite page)

Uhuru was speaking at a meeting with the entire leadership of Parliament convened at State House.

Uhuru has remained mum four months after the report was concluded by the steering committee chaired by Garissa Senator Yusuf Haji, whose term expired on June 30.

He attributed the delay to the Covid-19 pandemic and urged politicians to support the document once its released because it holds the key to ending electoral fraud and violence.

Uhuru, according to MPs, stressed on the importance of the handshake between him and Raila after the divisive 2017 presidential polls, insisting that no country can progress in a tense political environment.

He is also said to have called for an end to turf wars between the Senate and the National Assembly, which he said hamper implementation of his Big 4 agenda.

“The BBI seeks to end the ‘do or die’ attitude at the polls. The fear of losing and what the winner will do to you as you will be a nobody. The BBI and handshake is meant to stop this and enlarge opportunity for all, in a win-win formula,” the president is reported to have told the MPs.

“I’m not against anyone’s ambitions but let us deal with the immediate issues such as BBI so that we can get our country on a sound political and economic footing before we start engaging in 2022 politics,” he said.

An MP in attendance told the Sunday Standard the president recounted that the charged political environment after the 2017 elections pushed him to find a working formula.

“That is the reason why I reached out to the opposing side,” he said.

The meeting kicked off some minutes to 11am and ended around 2pm.

Lusaka then handed over to National Assembly Majority Leader Amos Kimunya, who spoke and invited his minority counterpart Mbadi, who invited Muturi, with the President wrapping up the session.

The president called on the leaders to prioritise legislation that support attainment of the government’s Big 4 agenda.

Speaking at a press conference later in the day at a Nairobi hotel by MPs allied to Uhuru and Raila, Nyeri Town MP Ngunjiri Wambugu said the president explained why he initiated the handshake and reassured them that BBI report will be released very soon.

“To him, BBI represents a situation where our politics will not be a matter of life and death. He wants a situation where everybody accepts the results of elections and where elections can go on without interfering with people’s lives. He asked us politicians to tame our ambitions so that the county can move forward,” he said.

Said National Assembly Deputy Majority Whip Maoka Maore: “This country has been surviving on the grace of the handshake. The elections are two years away but we have a party in the name of hustlers campaigning. This is the evil that we need to deal with,” he said.

Laikipia Woman Representative Cate Waruguru said: “We need to strengthen our institutions and seal the inherent gaps in our governance systems. We need to ask ourselves if we are ready for the winner-takes-it-all system that has been causing us problems. That is the reason Uhuru brought Raila on board and reopened the constitutional debate. I want to ask those people bastardising the BBI to be sincere with Kenyans.”

The president faulted MPs over turf wars, emphasing that the Senate and the National Assembly must find a seamless way to work and end numerous standoffs.

The president is said to have asked politicians to tone down on the political rhetoric as it was derailing his development agenda.

The president spoke even as his deputy, who was not present, took his campaigns to Meru County where he hit out at politics of rewarding political tribal kings every election cycle.

“For how long would our leading politicians meet to strategise on how to create posts such as Prime Minister when the ordinary boda boda rider and vegetable seller is thinking about securing his daily bread,” posed the DP at Maua where he stopped to address hundreds of locals.

During the meeting at State House, the president is also said to have opened up on his trip to Paris, France, where he clinched infrastructure deals, stressing on the need to tone down political rhetoric to build investor confidence.

“The first question I was asked is to guarantee that after 30 years, there will be return on investment. The investment in the economy by external investors is undermined by political ambitions, which is obvious, but can be checked,” the president told MPs.

The president travelled to France where he met his French counterpart Emmanuel Macron at the Élysée Palace in Paris, and witnessed the signing of several PPP agreements on water, infrastructure and energy worth billions of shillings.

The contract for construction of 190-kilometre Rironi to Mau Summit was awarded to a consortium of French companies, including Meridiam International, Vinci Highways SAS, and Vinci Concessions SA.

According to the Head of State, the project would see the highway expanded into a four-lane dual carriageway from Rironi to Mau Summit and rehabilitation of the Mai Mahiu-Naivasha Road and the creation of toll stations on the highway.

The president also explained the reason behind not fielding a candidate for the Msambweni by-election slated for December 15, saying it was out of respect for the handshake and his resolve to unite Kenyans.d.

However, the DP and his allies have thrown their weight behind independent candidate Faisal Bader despite the party’s position on the matter. The seat fell vacant following the death of former ODM MP Suleiman Dori.

Premium Why police officers could smile all the way to the bank
National
By Kamore Maina
1 hr ago
Xinhua Commentary: Africa should not be a battleground for a great power rivalry
Branding Voice
By Xinhua
1 hr ago
Premium Where former regional commissioners have been taken to
National
By Mike Kihaki
1 hr ago
Premium Uhuru linked bank: We will obey court ruling on Sh350m tax waiver
Business
By Brian Ngugi
1 hr ago
.

By Peter Kimani 1 hr ago
Premium Uhuru returns to limelight with promise to keep touch
.