Executive order challenged in case that could restore Ruto powers 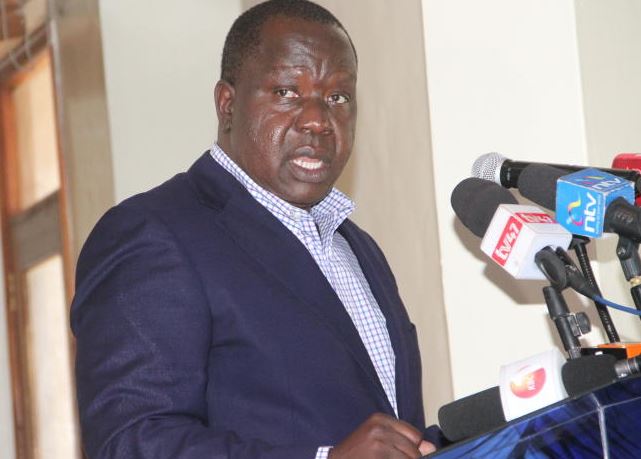 Jubilee government power play between President Uhuru Kenyatta and his deputy William Ruto has a new theatre: the court.

After the fallout between the two, Ruto is now a lone figure, sidelined in favour of Interior Ministry Cabinet Secretary Fred Matiang’i (pictured).

Through Executive Order No 1 of 2019, President Kenyatta technically anointed Matiang’i a Super CS, entrusting him to run his development engine.

This arguably sank the DP, who was making a killing politically launching or inspecting government projects across the country.

However, can a love founded in 2013 between the two and now gone sour be restored by the court?

A case filed before the High Court and seen by The Standard wants Uhuru and Ruto declared constitutionally inseparable so that government functions done without the latter are declared unconstitutional.

At the same time, the case filed against Attorney General Kihara Kariuki is seeking a declaration that the Executive Order 1 of 2019 was unconstitutional, as it violated the structure of power set by the Constitution.

The case, which now takes the political drama to a new level, was filed by Chege & Sang Advocates on behalf of two law students - David Chiuri and Daniel Muthengi.

The two petitioners argue that Matiang’i was junior to Ruto and therefore cannot head the National Development Implementation and Communication Committee.

The two argue that the presidency - composed of a president and a deputy - ought to stand until the end of the five-year term handed to the duo in an election.

They claim that being sidelined even in Cabinet meetings means Ruto has either been sacked by the president or has constructively resigned.

According to them, the Cabinet therefore cannot legally operate as the Constitution envisages that the president and his deputy are members to complete it.

Uhuru handed Matiang’i sweeping powers on the oversight of government programmes, signalling his confidence in the Interior CS in his final term in office that will shape his legacy.

Matiang’i chairs a key committee on the implementation of development programmes whose membership includes all Cabinet secretaries, the Attorney General and Head of the Public Service, a mandate a government insider said essentially elevated him to a “prime minister or chief minister”.

By Brian Okoth | 15 minutes ago

By Special Correspondent | 15 minutes ago