Senators turn heat on Lusaka as another meeting aborts 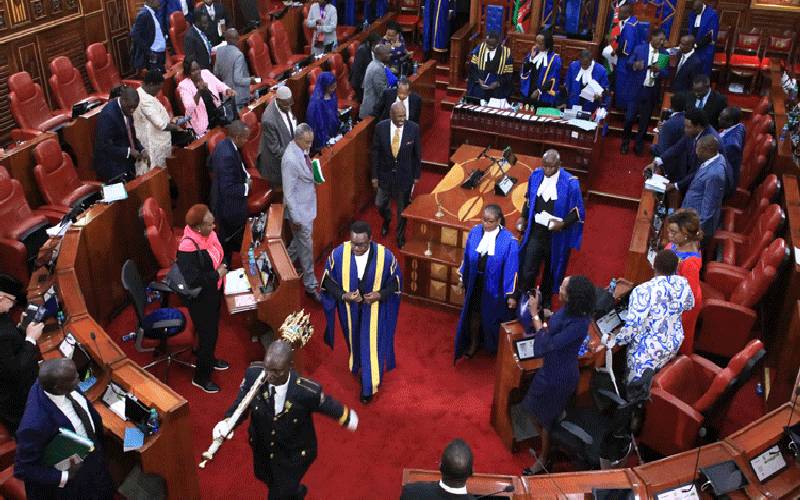 Senators have accused Speaker Ken Lusaka and President Uhuru Kenyatta of holding the Senate at ransom as another meeting on revenue sharing formula aborted yesterday.

Several senators attributed the aborted Speaker’s Kamukunji (informal sitting) to the indecisive leadership of Lusaka, Majority Leader Samuel Poghisio and his minority counterpart James Orengo, claiming they were being instructed by the Executive.

“The Speaker must now offer leadership by putting his foot down. We cannot have one agenda dragging on for this long and the Senate receiving the flak on behalf of the indecisive leadership,” said a senator who sought anonymity.

Minority Whip Mutula Kilonzo Jnr (Makueni) and Ledama ole Kina (Narok), both members of ‘Team Kenya”, criticised the speaker for not taking charge of the process as earlier communicated.

Olekina accused the Jubilee administration of lacking interest in resolving the impasse.

“This is a travesty of the rule of law. We are elected leaders but being controlled remotely from elsewhere. We mean good for this country but external forces cannot allow senators to make independent decisions as stipulated in law,” said Olekina.

“Senate is an independent institution and should transact its business independently, however, this is not the case. The leadership asked the mediation committee for 48 hours to consult and up to now they are still consulting.”

Kilonzo Jnr said if Lusaka wanted to resolve the matter, especially after the mediation committee failed to meet the leadership last Thursday, he would have held the Kamukunji to allow members to ventilate on the matter.

“This is the Speaker’s Kamukunji. He made communication on the floor. He does not need a brief to convene the same,” he said.

“We are waiting for tomorrow to proceed with the agenda because it seems the leadership is not committed to resolving the stalemate.”

Olekina said the Senate leadership is trying to circumvent the role of the House to please the Executive.

“That’s why now the National Treasury and the National Assembly have connived with the Senate leadership and are proposing amendments to the Public Finance Management (PFM) Act, through Majority Whip Irungu Kang’ata, to allow counties to receive 50 per cent of the Sh316.5 billion,” he said.

“We have the numbers. We are 25 but we cannot reveal the details because that is a war strategy. We shall rumble in the jungle. We are ready for the vote, we finish this thing once and for all. We can comfortably go to the vote,” said Nandi Senator Samson Cherargei.

Despite Lusaka officially calling for the Kamukunji last Tuesday in his communication to the House and a retreat between the leadership and the 12-member mediation committee to harmonise a report, none materialised. When contacted, Lusaka said he was waiting for Poghisio and Orengo to brief him before he could convene the Kamukunji.

“The matter is still in abeyance. We are having a meeting at noon with the leaders (Poghisio and Orengo) to get a brief, which will set the agenda for the Kamukunji,” he told The Standard.

Lusaka said the leadership was still working on new amendments, including one by Homa Bay Senator Moses Kajwang, that seeks to ensure no county loses

By Josphat Thiongo, Nairobi, and Jane Mugambi | 6 hours ago

By Patrick Beja and Willis Oketch | 6 hours ago