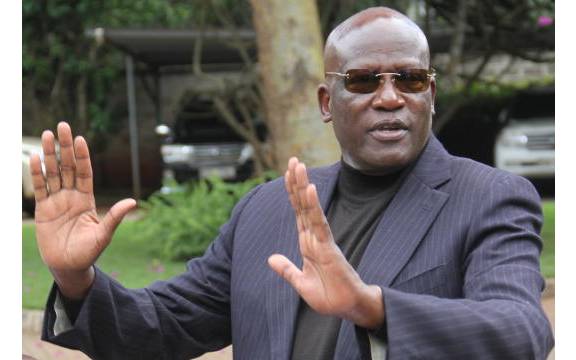 Former Machakos Senator Johnstone Muthama, who is leading a battalion of pro-Ruto campaigners in the lower Eastern region, on Wednesday hosted dozens of political aspirants, professionals and businessmen at his Mua Hills home in Machakos, where calls to ‘wipe out Kalonzo’ from Ukambani were discussed.

In the Mua meeting, which was chaired by Mr Muthama (pictured) alongside Mr Munyaka, Mr Mbai and Mr Musyoka, there were intensified calls to have Kalonzo removed from his position as Ukambani political kingpin as well as suppress Wiper’s dominance in the region’s politics.

Former Masinga MP Itwiku Mbai said although Kalonzo had been at the helm of the region’s leadership for many years, he had failed to establish a firm political leadership for the Kamba community.

“As a community, we badly need a new shift in leadership. It is useless for people to profess love for Kalonzo if he (Kalonzo) cannot offer the desired leadership for this community,” said the former MP.

Mbai said it would be fatal for the community to head for the next election under Kalonzo’s stewardship.

“The political command centre is expected to breathe a new life to the region’s politics and liberate our people from the fruitless loyalty to Wiper, which has not been keen on having a stake in national politics,” said Musau.

“Our priority should be to eliminate Wiper from Ukambani through smart politics. It will be a great victory if the party (Wiper) fails to deliver a single MP’s seat in any of the eight constituencies within Machakos,” said former Machakos Town MP Alphonse Musyoki.

Munyaka announced his decision to set aside his ambition for the Machakos gubernatorial seat in favour of Muthama’s candidature.

“As we campaign for Ruto to be the next president, I declare that I have deferred my ambitions to support Muthama’s candidature,” said Mr Munyaka.

Muthama, who quit Wiper after a bitter fallout with Kalonzo, said he would continue to host similar forums for delegates from Kitui and Makueni counties in coming weeks.