You contributed nothing to President Uhuru, Murkomen tells Tobiko 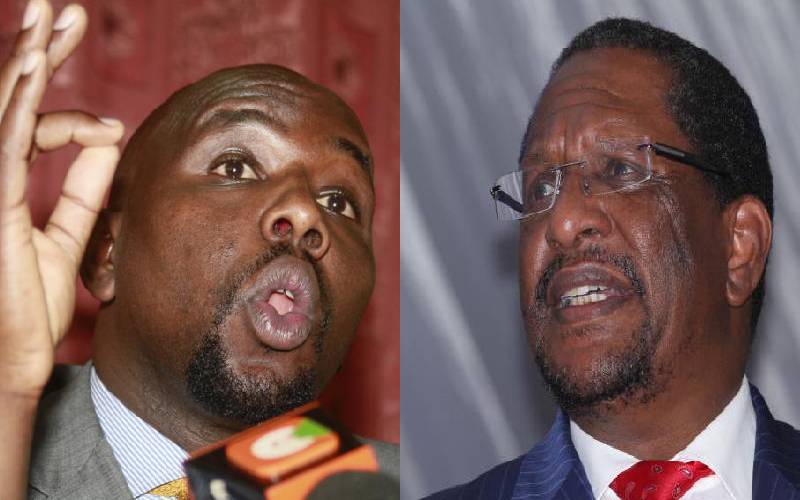 If you thought Elegoye Marakwet Senator Kipchumba Murkomen had lost in the war of words against Environment Cabinet Secretary Keriako Tobiko, you were mistaken.

In a bare-knuckle attack, the senator tore into the CS, saying he (Tobiko) meant nothing to President Uhuru Kenyatta having contributed very little in his election win in 2017.

He said Tobiko contributed nothing to Jubilee with his Ilpolosat and Mashuri polling stations which saw NASA sweep Imaroro and Kaputiee wards.

“Tobiko you contributed nothing to UhuRuto. In both Ilpolosat and Mashuri polling stations, NASA won. Your MCAs both in Imaroro and Kaputiei Wards are NASA,” he tweeted on Saturday.

The angry Murkomen claimed Tobiko was a small man who is not known in his backyard, saying the CS only visits his village during funerals.

“No one knows you in your village which you only visit for funerals. In Embobut (my village), Uhuru won all votes so you can’t defend him better than me,” he said.

Murkomen was responding to Tobiko who had on Friday accused him of disrespecting President Uhuru.

The former DPP had told off Murkomen and demanded him to respect other leaders, especially President Uhuru Kenyatta if he wanted people to respect him and Deputy President William Ruto.

Tobiko also accused Murkomen and his father of occupying forest land and threatened to evict them soon.

"When we were evicting people from the forest, Murkomen was opposed to it and incited people not to move but they eventually left the forest land. He and his father live in the forest and I want to tell him to start packing his belongings," Tobiko said.

The genesis of the feud

The war of words started on Thursday after the former Jubilee Majority Leader in the Senate took issues with remarks by Tobiko against DP Ruto.

Tobiko while in the company of his Interior and Health counterparts Fred Matiang’i and Mutahi Kagwe had accused the DP of using his Karen office to campaign for 2022, something that did not go down well with the DP allies.

In response, Murkomen told CS Tobiko he had no moral authority to lecture DP Ruto, saying he is a small person in the Jubilee government compared to Ruto.

“Mr Tobiko you are a mere clerk in Jubilee government. You forget so fast that you became a CS because the President was trying to get rid of you from the office of DPP. You have no moral authority to lecture your boss the DP even if he is being molested by his boss. First, try to be MCA,” he tweeted.

“While I understand Tobiko’s right to protect the sister, I wonder why he is using state resources including, CSs Mutahi Kagwe and Fred Matiang'i to promote nepotism” he posed.