Ousted Aukot fights back: 'They are destroying parties against BBI' 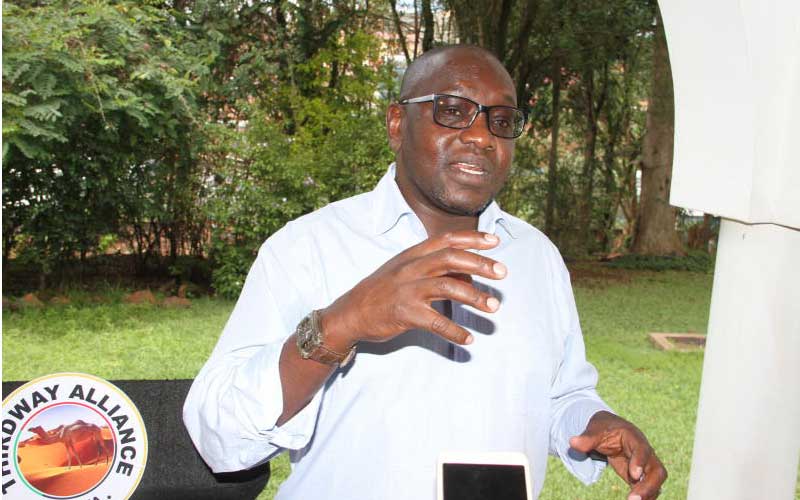 Ekuru Aukot (pictured) -- the flagbearer of the Punguza Mizigo Kenya Party -- has scoffed at suspension from his party as unconstitutional and a scheme to muzzle and eject anyone who doesn’t support the Building Bridges Initiative (BBI).

The Thirdway Alliance National Executive Committee (NEC) earlier today kicked him out pending the determination of a case challenging his leadership.

"These are BBI sell-outs who went to our party to try and sell our Punguza Mizigo Kenya. The reason I’m being fought and the reason I am being discredited is because of my stand. I don’t believe in BBI. It is not based on any constitutional framework," Dr Aukot told Standard Digital on phone.

The NEC accused Aukot of ignoring a court order, financial impropriety and lack of transparency to party members. He is also facing charges of assaulting his deputy Dr Angela Mwikalio using crude words.

"Dr Ekuru Aukot has been suspended as the party leader indefinitely and shall not represent or transact any business on behalf of the party pending the determination of the matter by the disciplinary committee," the NEC said in a public notice.

Aukot has, however, condemned the move arguing that there is no way you can convene a National Executive Committee meeting without the party leader according to the party’s constitution.

Aukot has also said that the internal mutiny is externally influenced and is meant to destroy his party because of their stand against the BBI.

This is the second time the party leader was having a run-in with his party officials after he was sued in February over the Punguza Mizigo Initiative.

Aukot told Standard Digital that nothing will shake him.

Senior citizens defy age, failing health to choose preferred leaders
National
By Standard Team
59 mins ago
Why you should teach, encourage children to read from an early age
Opinion
By Kennedy Buhere
1 hr ago
The rot runs deep in Kenya; but we must change
Opinion
By Kanyi Gioko
1 hr ago
How to create networks and strengthen professional relationships
Opinion
By Muriithi Ndegwa
1 hr ago
.