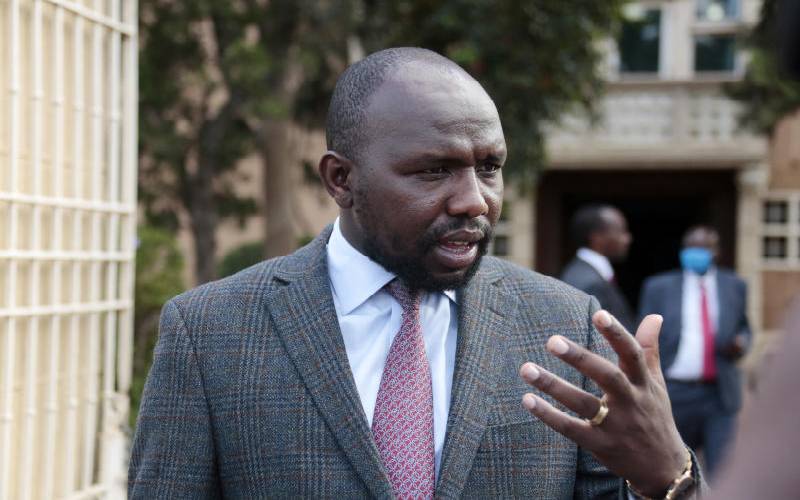 Elgeyo Marakwet County Senator Kipchumba Murkomen (pictured) is under fire from a section of residents for opposing the new revenue allocation formula.

Residents yesterday hit at Murkomen for opposing the new Commission on Revenue Allocation (CRA) formula that would see the county gain Sh398 million in equitable share.

The new formula, which puts emphasis on population, has occasioned a standoff in the Senate with senators including Murkomen and his Nairobi colleague Johnson Sakaja among others opposing it.

But back at home, Murkomen's constituents came out guns blazing, accusing the former Leader of Majority in the Senate of 'betraying his county'.

A group of residents led by Chairman of Elgeyo Marakwet civil society organisations Wilfred Kihara said Murkomen was no longer championing the interests of the county, which he has represented for two terms.

Kihara noted the senator was denying the county millions of shillings in additional shareable revenue in the pretext of fighting for counties that will lose in the new formula. This, he added, exposes Murkomen as a leader only keen to champion interests of Deputy President William Ruto at the expense of his county.

"Don't oppress the people of Elgeyo Marakwet in the name of playing national politics. We thought Murkomen understood the needs of our people, but we were wrong," he said.

"You (Murkomen) and your Tangatanga brigade played politics with the establishment of two dams (Arror and Kimwarer) and that is why until now we are yet to get a dam. We know you are serving the interests of an individual by fighting against increased resources to our county."

Kihara added Elgeyo Marakwet County has no agricultural extension officers because it receives the second lowest allocation from the national government.

“We believed that you would serve the county better than the old generation of leaders. We demand you support the third generation formula if you still need our support,” he added.

Peter Yego told Murkomen to stop undermining Tolgos in the pretext of fighting for a win-win revenue sharing formula.

Yego said the governor has been pushing for increased allocation for seven years and his efforts should not be derailed by opposition from the senator.

“We are keenly watching the happenings in the Senate and we are asking our senator to keep off Elgeyo Marakwet if he fails to vote for a formula that will see our county gain additional allocation,” he said.

Elgeyo Marakwet has been marginalised since independence and should not be denied additional revenue.

Yego said it was ironic for Murkomen, who is said to harbour ambitions to become a governor, to oppose additional resources to the same region he plans to serve as county chief.

“We are asking the Jubilee party to take disciplinary action against Senator Murkomen for opposing a government position in the Senate. We want our senator to work closely with his Nandi counterpart Samson Cherargei for the benefit of our county,” he said.

The governor said the formula will help counties including Elgeyo Marakwet, which has been receiving little allocation through the previous formulae.

“I am one of the governors who has fought hard for my county and others that receive low allocation to get a fair share of the national revenue. I have met the Senate and the CRA over this issue,” the governor said.

In the North Rift region, Nandi County will gain Sh941 million while Uasin Gishu will take home an additional Sh1.8 billion. Uasin Gishu Senator Margaret Kamar and Nandi’s Cherargei are in support of the new formula.