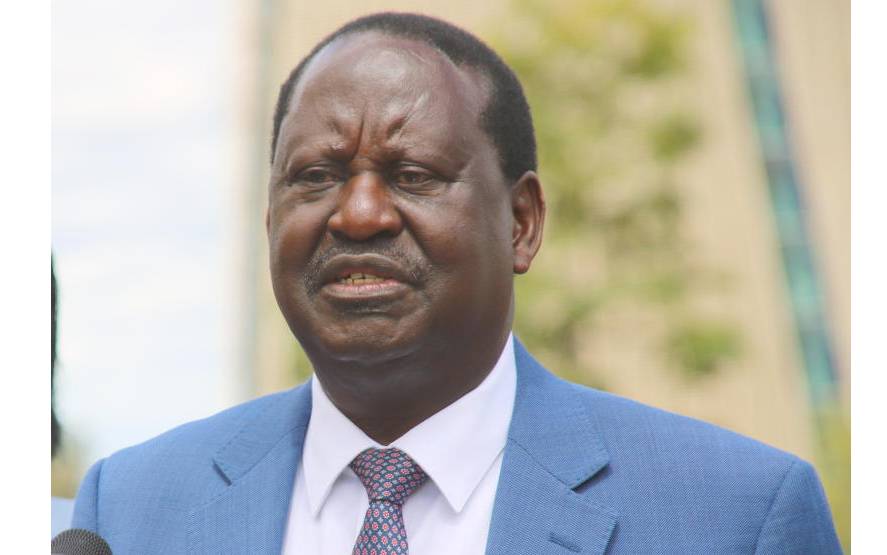 The risk of losing the support of close to five million votes and more than 100 legislators could have informed the ODM leader Raila Odinga’s change of position in the now controversial Senate revenue allocation formula.

Odinga (pictured above) told a local television station that he took a position on the revenue formula last week before he understood the Senate Committee proposal. He had returned from the United Arab Emirates (UAE) and called for the delayed implementation of the new revenue sharing plan until a deal was reached.

He had been unwell at the time and may not have kept abreast of happenings, he said. The misunderstanding of his position, however, threatened to eat away into his political capital.

“We should not be talking about winners and losers. It should be a win-win situation,” Odinga said.

The emotive revenue allocation formula has divided the Senate, with seven attempts by the government to pass the committee’s proposal failing. It has also created new political formations which if allowed to fester, would eat into traditional loyalties and political groupings.

“His support for the CRA formula is grossly inaccurate and misleading. These reports are trying to oversimplify an extremely complex stalemate that Odinga is trying to help the country navigate.

“Odinga cannot withdraw support for a document that is not under consideration by the Senate,” reads part of the statement his spokesman Dennis Onyango sent yesterday.

Last week, Raila issued a statement urging the senators to support the CRA proposals, sparking political outrage from the counties that were not supportive of the position.

His position was understood as an endorsement of the amended committee report that overemphasised the population variable.

Had the proposed formula by the Senate Finance and Budget Committee gone through, 19 counties from the North, Coast and Lower Eastern would have lost a total of Sh42 billion while 28 counties would have gained.

Wajir County would be one of the biggest losers, with its allocation being slashed by Sh1.9 billion.

Mandera and Marsabit would see their revenues drop by Sh1.8 billion each.

A day after Odinga’s statement in support the committee’s position, a group of 10 MPs from the Coast region issued a statement accusing him of betraying them.

The MPs, led by Kilifi North legislator Owen Baya said Odinga had shown that he did not care for the people of the Coast region and vowed to form a party that would bring them together.

“We now know our friends, Odinga has betrayed us and we will now begin to chat the way forward without him. He has forsaken us at our time of need,” Baya had said.

Odinga enjoys the support of the Coast region, particularly Mombasa, Kilifi, Kwale, Tana River and Taita Taveta which have voted for him in previous elections.

In reinforcing his new position, the ODM leader encouraged senators to overcome their extreme positions and come up with a middle ground document that all can agree on so that the country can move forward.

The original report by the CRA on the third basis for revenue-sharing for the next five financial years has been amended many times.

Yesterday, ODM chair John Mbadi came to the defence of his party leader, saying he had not made any about-turn on the revenue sharing stalemate but appreciated the concerns of the counties that could have lost funds if the Senate report was approved.

“CRA had an objective assessment on three key parameters – service delivery, equity and fiscal responsibility. Odinga did not abandon the CRA formula but only appreciated the concern of the counties that would have lost the cash,” he said.

Mbadi said the ODM leader has been calling on senators to sit down and agree on a formula that will ensure no county loses cash even as Kenya awaits the increase of the allocation to counties from the current 15 per cent to at least 35 per cent.

Deputy President William Ruto had taken a middle-ground position, asking the senators to ensure a win-win situation was adopted to ensure no county lost in the arrangement.