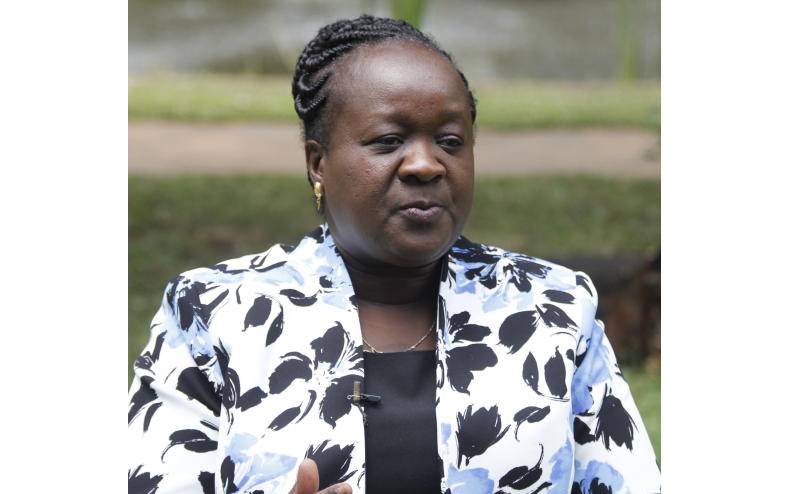 Wiper has answered ODM after the latter’s Secretary-General Edwin Sifuna released a statement on Sunday rubbishing any secret political deals between Kalonzo Musyoka and Raila Odinga.

In a statement by Secretary-General Senator Judith Sijeny (pictured above), Wiper restated that the pre-election deal was between its leader Kalonzo Musyoka and ODM leader Raila Odinga and not between the two parties.

“The story in question had clearly stated that Kalonzo talked of a deal between him and Raila, not between Kalonzo and ODM. This means that the two senior politicians may have made a deal without the knowledge of any other members or officials of the party,” read the statement.

The issues came afloat after Kalonzo had told the Sunday Nation in an interview that he had a secret pact, separate from the NASA arrangement with Raila on 2022.

This was immediately followed by a rebuttal from the ODM camp that took a stand that a pact of such a nature does not exist.

“We wish to state categorically that no such deal exists neither between the party nor the party leaders as affirmed to us by our party leader,” said ODM Secretary General Edwin Sifuna.

Senator Sijeny also accused Mr Sifuna of not consulting his party leader on the issue before issuing statements to ascertain whether the two leaders had a side agreement.

ODM chairman John Mbadi also said that he was not aware of such a deal but also said that the party leader has powers to make such moves without the need to consult the members.

“The party leaders by dint of the law are at liberty to enter into any viable coalition or pacts without necessarily consulting us,” he said.

Mbadi says that in the event of such a pact being made, top party officials such as himself are consulted before the decision is made and expresses doubt that the party leader can make such a move while leaving them in the dark.

“If it’s a deal between him and our party leader only, then that is between two. Party constitutions allow party leaders to get into alliances,” said Mbadi.

The blatant statement by senator Sijeny has called out Mr Sifuna for being condescending towards the Wiper leader, a man she said has been Raila’s running mate twice in 2013 and 2017 making them very senior politicians.

“To see the shameless, unwarranted attack against Kalonzo from a man who is so politically junior to him and who, for all intents and purposes, should defer to Kalonzo, owing to the latter’s immense political, leadership, and diplomatic experience,” read the statement by the senator.

The Senator also reminded Sifuna of Kalonzo’s role in scooping votes for the ODM from Ukambani region and should therefore not downplay his leadership.

“I urge Sifuna and his ilk to tame their antagonistic grandstanding, which many feel could be too costly to ODM by consigning it into a tribal block it was in 1997,” read the statement from the senator.

Accompanied by parents, the children sit within protective boxes made using plastic sheets that are disinfected after each classroom session to get gu