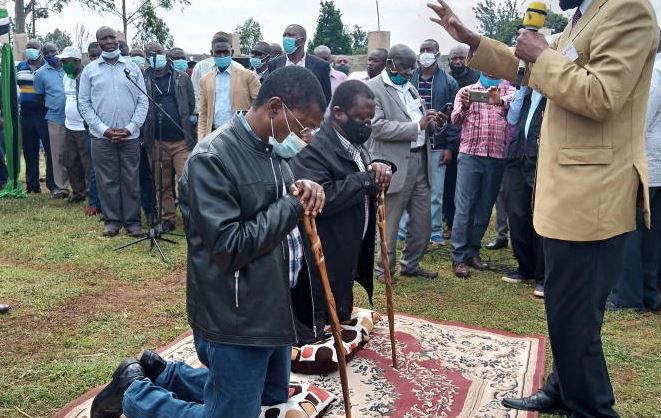 Amani National Congress leader Musalia Mudavadi and Ford-Kenya's Moses Wetang'ula (pictured) are facing the battle of their lifetime over the control of western politics for alleged “flip flopping”.

The two leaders have been accused of sending mixed signals on their stance on the Building Bridges Initiative (BBI) amid claims of links with Deputy President William Ruto.

Claims of their association with the DP, who has been accused of fighting the handshake between President Uhuru Kenyatta and ODM leader Raila Odinga, have triggered ganging up against the two by key leaders from the region.

Mudavadi and Wetang'ula have on several occasions held political rallies in the company of Ruto's allies led by former National Assembly Majority Whip Benjamin Washiali and Kimilili MP Didmus Barasa, fuelling speculation that they could be seeking to work with Ruto in the 2022 succession politics.

Some of their MPs have also been hosted by the DP at his Karen office. Eliud Owalo, a close associate of Mudavadi, has also held a meeting with Ruto.

Cotu Secretary General Francis Atwoli, Kakamega Governor Wycliffe Oparanya, Devolution CS Eugene Wamalwa and a host of MPs have sustained an onslaught against the leaders, as they rally the region to back Uhuru and Raila's political pact.

Yesterday, Atwoli said it was not practical for the leaders to claim support for the BBI when it was clear they were working with Ruto. He announced plans to hold a "Bukhungu Two" where a declaration will be made to vote out all politicians opposed to the BBI.

"You are either with the handshake team or with Tangatanga. Some of these MPs who keep trooping to Sugoi will never be elected again in Western Kenya," said Atwoli.

"Next year we are having Bukhungu Two declaration and that is where a decision on western politics will be made. If you are not with BBI then it is as good as losing your position in the next election. We will guide our people to vote for the right people," he added.

He described the two leaders as political merchants, claiming their fortune in the region was on a fast downward trajectory for not listening to the electorate.

"Mudavadi should be the Luhya spokesperson, but some people are misleading him. He is losing his influence in the region very fast," he added.

But Wetang'ula dismissed Atwoli's claims, saying their focus at the moment was to unite the region before they could seek an alliance with other political leaders.

He said the region would only benefit from the next political dispensation by presenting a united front ahead of the next elections. The Ford-Kenya leader revealed that their decision on alliances would be informed by the BBI outcome, which is set to alter the political architecture by introducing new positions like that of Prime Minister and two deputies.

"Our agenda with Mudavadi is to unite the western region before we can reach out to other leaders for the purposes of 2022 succession politics," said Wetang'ula.

He explained that the Jubilee MPs who joined the rallies were the region's leaders and had indicated their readiness to join them in their cause.

"The Jubilee MPs who have been joining us in rallies come from the region we are trying to solidify. We are in the business of bringing everyone on board," he said.

He dismissed those linking them with Ruto, saying formations for 2022 would only come clear a year to the next polls.

Wetang'ula described the country's politics as fluid, saying all the current political leaders have worked with each other at one moment or the other.

"Politics of this country is very fluid. Every politician has worked with the other in previous formations. Uhuru worked with Raila in the first referendum, Mudavadi and I have worked with Raila. I can also tell you that formations that will determine 2022 are certainly not being formed today. Such formations will come up one year to the elections," he said.

He added: "Our focus now is not who to align with but how to consolidate the region because no region can go it alone in our political set up. We are also waiting for the BBI report. We are waiting to see the final document because the outcome of the process will also inform the kind of alignments in the run-up to the next poll," he added.

ANC Secretary General Barrack Muluka said it was misleading to say the party was in a pact with Ruto.

He said the party had resolved to front Mudavadi for the top seat come 2022, and that there was no way they were going to work with Ruto, who is also keen on running for the presidency.

"We have never had an official resolution to work with Ruto. Our position has been that Mudavadi is going all the way to the wire. Working with Ruto would mean we support his presidential bid because he cannot be a running mate after doing two terms as Deputy President," said Muluka.

Mudavadi had in a previous remark indicated that he was ready to work with Ruto, but on condition that the DP backs his bid.

“I am at liberty to work with anyone who has the same aspirations like ours, including the deputy president and other leaders. We are tired of being told that we are working for William Ruto. Let me say that we welcome Dr Ruto as long as he supports our bid for the presidency,” said Mudavadi.

Osotsi said the two leaders had become masters of reactionary politics. "In politics, if you cannot take risk by taking a particular decision, you become irrelevant and unreliable. You have seen them flip-flopping in every political event from the handshake to BBI. Over the years, Mudavadi has perfected the art of not being decisive on his political moves," said Osotsi.

Eseli said some ANC and Ford-Kenya MPs allied to Mudavadi and Wetang'ula were basically in Tangatanga. "The two leaders are not sure of themselves. They don't know which political affiliation they belong to," he said.

But Lugari MP Ayub Savula said it was Tangatanga MPs that had been attending their rallies, noting that the party parliamentary group meeting on Wednesday resolved that no party MP would associate with Ruto's Tangatanga brigade. "We resolved that our focus will be to strengthen Mudavadi as the strongest presidential candidate in western to go out and form coalitions with other communities to ascend to power," he said.

Savula added that ANC MPs also resolved not to attack Oparanya, Wamalwa and Atwoli. "We instead will continuously urge them to join the Musalia bandwagon".

Savula said the party resolved to free Mudavadi to seek partnership with leaders from other regions after the tour of western region.

Three bundles of joy for couple that tried for 22 years

Since she got married in 1998, Makena has seen countless gynaecologists, herbalists and pastors in search of a baby