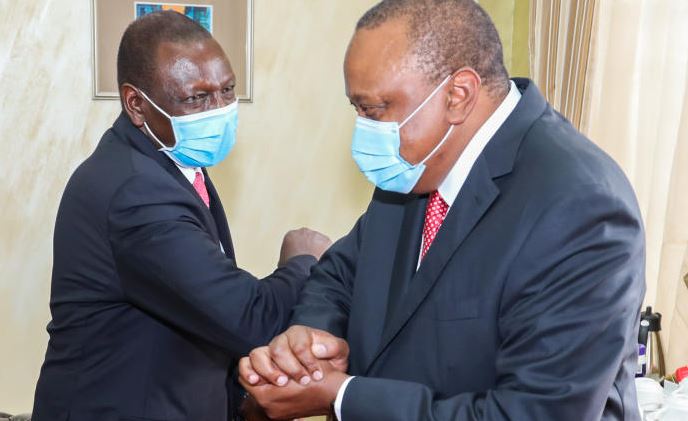 In a flat-out war for the presidency in 2022, President Uhuru Kenyatta and Deputy President William Ruto’s (pictured) sides are leaving nothing to chance in what is shaping out as battle of tactics.

While Kenyatta’s side has gone for the regional kingpin approach to savouring victory, Ruto is dividing the same regions up and creating mini-kingpins to eat into Kenyatta’s advantage.

As Uhuru and his men are emboldened by history that no vice president has ever earned it by the sweat of their brows, Ruto is keen on flashing the victim card; portraying the picture of a betrayed politician who has given his all to support others.

Kenyatta’s side has adopted the alliance approach, which includes incorporating major political players, including Opposition leader Raila Odinga, while at the same time taking clear advantage in the constitutional review process. The side also hopes to ride on referendum wave to sweep to victory.

In turn, Ruto has crafted a “hustler” narrative, demonising the big players, while also purporting to offer young and ambitious Kenyans hope for a break from their situations. He is also counting on Kenyatta’s reluctance for a full-blown assault against him to make significant advance towards 2022.

“We want to bring many on board so that we can have a big formation that will decide who leads the country after President Kenyatta. The leadership of the country is critical and should not be left to people with questionable characters,” Jubilee Party National vice chair David Murathe told the Sunday Standard.

A key part of the Kenyatta side is a two-pronged strategy to reclaim Mount Kenya from what they considered “disrespectful” infiltration as well as to take control of the Jubilee political machinery while it is still powerful.

The latter has taken the form of a ruthless purge against Ruto sympathisers and was successfully completed last week. The former is ongoing, with just a few MPs holding out, but are expected to fall by the wayside in the fullness of time.

Yesterday, Murathe said those thinking that they can walk into Mt Kenya and have control of the votes without the support of President Kenyatta are in for a rude shock, given that the region listened to its leader before making their decisions.

He confirmed that their immediate plans are to have full political control of Mt Kenya region, full control of the formations taking shape there, and through this unite the entire country.

Earlier this week, a lunch meeting attended by nine political bigwigs from Central Kenya raised a hue and cry both within and out of the region.

The Kenyatta confidant said it will not be long before they have a united front as a region and chart a common political course. “Together with Opposition leader Raila Odinga, former vice president Kalonzo Musyoka and Kanu party leader Gideon Moi, we have a strong team, and with the support of President Kenyatta it will be a wrap,” Murathe said.

He said the Ruto team had indicated that they would want to decamp from the party and therefore not be part of its future. He said if they were patient they would enjoy the support of the huge national party if the DP was to become the Jubilee candidate.

“We will have a competitive nomination process in the party and whoever wins the ticket and be a flag bearer would be supported by the president, even if it is the DP. But if they move out, we wish them well but it will be a long short for them,” he said.

Aware that Jubilee is fast slipping away from his hands, Ruto is said to have adopted the strategy of sponsoring the formation of smaller parties that guarantees him pockets of support in the regions.

“The plan is to have an umbrella party but also ensure that each region is covered and delivers support,” said an MP from Mt Kenya region who is part of the strategists.

This strategy also entails identification of mini-kingpins where it matters most. In Central, for instance, Mwangi Kiunjuri has taken up the lead with The Service Party (TSP) while in Eastern, former Machakos Senator Johnstone Muthama has positioned himself.

In Coast, former Mombasa Senator Hassan Omar is emerging as the Ruto point man while in Western, it is a perfect case of divide and rule. Together with this, Ruto has been using the purge aftermath to meet strategic groups, appeal to the church, the youth, the poor and political rejects.

Towards this end, Ruto is said to be wooing Amani National Congress (ANC) leader Musalia Mudavadi and his Ford Kenya counterpart Moses Wetangula. The two are victims of recent political assault that preceded the Jubilee purge and which saw party coups instigated against them and them replaced as Western spokesmen.

“The talks are progressing well, so far so good and it will come to pass,” said Webuye West MP Dan Wanyama.

A month ago, Ruto’s Tangatanga wing formed a working committee with the ANC and Ford Kenya where six MPs -- three from each group -- were tasked with crafting a winning formula for the team. Through the pair, Ruto hopes to eat into a good fortune of Western votes.

In Eastern, Muthama had until 2017 been an overzealous supporter and financier of Wiper leader Kalonzo Musyoka. He has since given Wiper notice that he is no longer in the party and that he will be running and sponsoring candidates on his own party in 2022.

“They will be shocked, I will have a party and we will go through grassroots mobilisation across lower Easter and beyond. This will be thorough and energetic,” Muthama said.

Belgut MP Nelson Koech said when push comes to shove and they are denied Jubilee Party, they will have a different and formidable outfit that will rattle the political landscape.

“You know Ruto is a grassroots mobiliser. Having grown from a humble background makes him connect with the people. If they wrestle Jubilee Party away from him, it will not be hard to have a robust outfit for 2022,” said Koech.

His assertion is reinforced by Jubilee Deputy Secretary General and Soy MP Caleb Kositany who says they will not be cowed and if pushed out of Jubilee, they will then secure a more comfortable home.

According to Murathe, the divide and rule strategy Ruto’s side is deploying has been overtaken by time and events. He says they are clutching onto the straws. These sentiments are shared by Senate Majority Whip Irungu Kang’ata.

“Those days are gone. We have come a long way to accept divisions of this kind. Take it from me, Jubilee under the leadership of President Kenyatta will crush those small parties like something else. The owners will wish they listened to us,” Kang’ata said.

He said getting the presidency requires a mix of virtues, including but not limited to, patience, caution, skill, respect and strategy. He seems to think that by and large, Ruto has none of these.

“Essentially, Ruto is the past. And the sooner his remnant of allies in our region come to terms with this, the better for them. We are glad that they are beginning to realise that they are backing the wrong horse. We are ready to cautiously welcome them back to the fold,” Kang’ata said.

Tiaty MP William Kamket says Ruto is rudderless at the moment and what is being touted as strategies is desperation. “Everyone now knows that Ruto is a spent force. He is using a lot of his energy for no good reason, he has already made history as a DP who is also an opposition leader. That is good enough and should content him,” he said.

According to committee chairman Karanja Kibicho, the first phase has already put into use 5,200 acres.