Senator Malala laughs off bid to kick him out 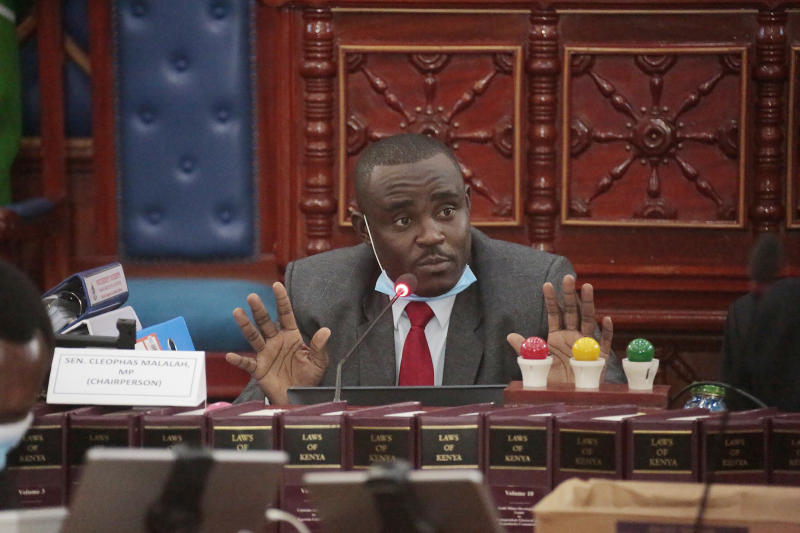 Kakamega Senator Cleophas Malala (pictured) has laughed off a decision by Amani National Congress (ANC) party to expel him. His expulsion was announced moments before the verdict that cleared Kirinyaga County Governor Anne Waiguru of wrong doing in corruption and abuse of office allegations leveled against before the Senate. Coincidentally, Malala read out the Senate select committee’s decision to rescue governor Waiguru at the very time the move to eject him from ANC was announced.

Legal experts believe the development leaves the outspoken senator between a rock and a hard place and may politically ruins his career. However, political analyst Herman Manyora argues that ANC’s wish may not be granted citing numerous examples of legislators, who continue to serve despite attempts to expel them by parties which sponsored them into parliament. Prof Manyora cited the case of Malindi MP Aisha Jumwa and embattled Nominated MP Godfrey Osotsi, who continue to serve in their positions yet ODM and ANC parties had activated processes to have them pushed out for not being loyal. Hold fort “The development will not shake Malala, the senator is too sure of continuing to serve in the elective position until 2022 because his case is similar to that of Osotsi and MPs in other political outfits, who appeared to have gone against the gravy train, rubbing their party leadership the wrong way,” said Manyora.

Moments after the Waiguru impeachment case was put to rest by Malala, the senator was quick to inform the Senate and reassure his supporters that he remains the Kakamega senator. “I want to make it clear that I will continue serving as senator for Kakamega, nothing has changed,” declared Malala on the floor of the House. But it is not a secret that Malala faces a tough political future particularly if the ANC successfully bids for his removal. Malala is in for a stern test since already, the party has formally communicated to the Office of the Registrar of Political Parties about the intention to push him out. Plans to kick out Malala have been on the cards for a while over his questionable allegiance to the party. In November 2019, the party petitioned its leader Musalia Mudavadi to discipline Malala for being loyal to the Orange Democratic Movement.