Uhuru to rule on Duale fate on Monday 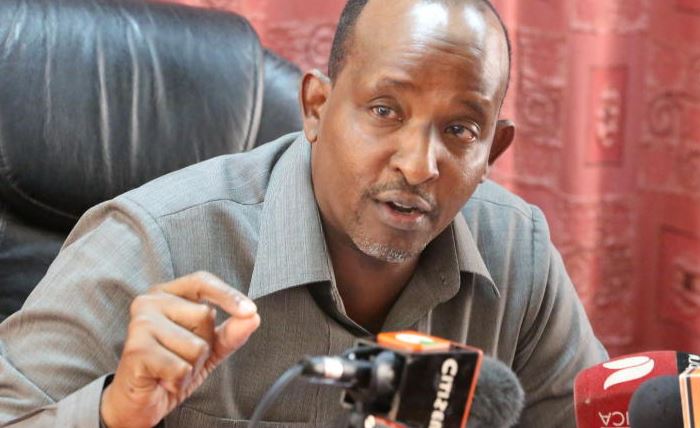 National Assembly Majority Leader Aden Duale’s fate is as good as sealed after at least 130 MPs signed a petition seeking his removal from office.

The Standard has reliably learnt that President Uhuru Kenyatta, who is the Jubilee Party Leader, will chair a virtual Parliamentary Group (PG) meeting from State House, Nairobi on Monday.

The MPs will converge at the Kenyatta International Conventional Center (KICC) where the President will unveil his new parliamentary leadership team.

A source said Duale (pictured) was among those targeted for removal. This follows the collection of signatures from Jubilee MPs who said they did not have faith in Duale as the Majority Leader.

“The purge is on. The party leader has convened another PG on Monday, where Mr Duale will be shown the door,” said a source aware of developments within Jubilee Party.

“The President received the petition from the MPs expressing their lack of confidence in Duale. He (Uhuru) has gone through the petition and made a decision, which will be communicated during the meeting,” said the source.

Kieni MP Kanini Kega, who has been pushing for the removal of Duale, yesterday told The Standard that leaders expected the President to convene a meeting any time to fill vacant positions and make changes in House leadership.

“I believe by next week, the Party leader will call a meeting to restructure the party leadership in compliance with the Standing Orders that gives him up to Thursday next week,” he said, reinforcing speculations of looming major changes.

The revelations come a day after Deputy President William Ruto met MPs de-whipped from various positions in the National Assembly and Senate.

The Kieleweke faction of Jubilee, and which is allied to the President, has been pushing for Duale’s ouster, after Mumias East MP Ben Washiali was stripped of the Majority Whip position.

Duale’s retention irked the Kieleweke brigade, going by the assertions by Majority Whip Emanuel Wangwe and his deputy Maoka Maore, who justified the collection of signatures for his removal as a strategy to get clarity from their party boss.

There has been lobbying to save Duale from the planned purge, with some leaders from his backyard holding meetings in the city.

Sources said the President had made up his mind and also planned to effect other changes in government.

A planned Jubilee Party meeting on June 8 was postponed at the last hour. The party leadership had planned to discuss the anti-Duale petition.

”After consultations, it was agreed that the petition be forwarded to the party leader, therefore the meeting scheduled today at the party headquarters has been postponed until further notice,” read a message.

Are there attempts to lock William Ruto Out of Presidency? Aden Duale shares his sentiments

Lawyers say SGR dispute not yet over

The dispute on the multi-billion-shilling Standard Gauge Railway contract is not yet over.

By Betty Njeru and Moses Nyamori | 3 hours ago