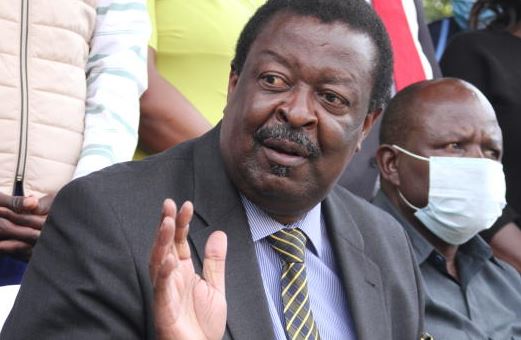 Amani National Congress (ANC) leader Musalia Mudavadi (pictured) is undoubtedly a troubled man after an alleged failed plot to oust him and now being linked to a budding pact with Deputy President William Ruto.

Questions abound whether Mr Mudavadi will weather the storm that threatens to tear apart his party and to overarch Ruto’s political ambitions.

The former Vice President’s foot soldiers have been firing from both barrels at the perceived enemies of Mudavadi and his party. The latest is claim that he’s working with Ruto, a charge denied by party Secretary-General Barrack Muluka.

Nominated MP Godfrey Osotsi has said Mudavadi’s term as ANC boss alongside other officials is set to expire on Monday, and demanded that the party conduct grassroots polls to elect new office bearers.

“We will not cave in to blackmail, be it from our political competitors or from crusading journalists and media houses,” Mr Muluka said of reports that his boss had been “bagged” by Ruto.

“Regarding 2022, we will cross that bridge in good time. For now, we are aware that the DP aspires to ascend to the presidency as do Moses Wetang’ula and Mudavadi. They are all potential competitors for the same prize,” Muluka said.

But Osotsi has been a thorn in Mudavadi’s flesh. He is still contesting the secretary general position with Muluka at the Court of Appeal. He claims to walk around with all ANC founding documents and does not therefore need a coup to dethrone Mudavadi.

He said all the current party officials took over the office in June 2015 and their term in office is expected to elapse on June 15.

“Our Constitution says term of office for all our party officials is five years and this party was registered on June 15, 2015, and the party constitution says if there is a vacancy in the party leadership, then we should have grassroots elections,” said the MP.

Osotsi’s sentiments came days after Lugari MP Ayub Savula claimed he had been approached by ODM to wreck the ANC party.

Mudavadi’s current dilemma could be akin to the situation he found himself in June 2015 when he opted to resign as United Democratic Forum (UDF) party leader, a vehicle he used to vie for presidency in the 2013 elections.

He defended his decision saying what had happened was to rebrand UDF following in-depth negotiations then.

In early 2013, Mudavadi temporarily joined Jubilee coalition but quit later when it became evident Uhuru Kenyatta was not ready to abandon his presidential bid in his favour .

Much earlier, Mudavadi was a member of the Orange Democratic Movement (ODM) but left the party and joined UDF over what he termed lack of internal democracy.

Mudavadi has vowed not to be sidetracked by the political sideshows from people he calls ‘political stooges’ and says he will always put the interest of Kenyans at the centre of his political decisions.

His sentiments are shared by Nambale MP John Bunyasi (ANC) who doubles as Western Parliamentary Caucus chairman. Bunyasi led other ANC legislators in castigating Osotsi who they claim was long expelled from the party.

Osotsi, however, says he will not be intimidated.

“What the party should be doing now is to start the process of grassroots elections in line with the Political Parties Act,” he said.

Salah explains what Liverpool must do to win Premier League title

By Wainaina Ndung’u and Ndung’u Gachane