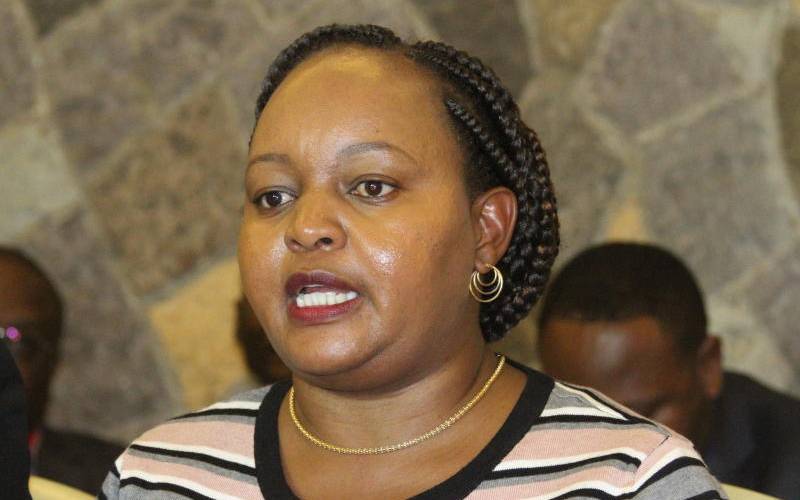 Four legislators from Kirinyaga County led by the area Senator Reubenson Kibiru have said they respect the decision by the County Assembly to impeach Governor Anne Waiguru.

In a press statement, the legislators stated that they had no option but to respect the decision by the Kirinyaga County Members of County Assembly to impeach the Governor (above) but have no personal vendetta against her.

They said that their intention is to ensure that both sides involved in the dispute get a fair hearing on the floor of the Senate.

“We wish to categorically state that none of the undersigned (referring to them) holds any personal vendetta against Governor Anne Waiguru…it is only right for us to demand an open-ended procedure that will ultimately free or indict the governor,” they noted in their statement.

The Senate on Thursday received formal notification and petition of the ouster of Waiguru as Kirinyaga County boss, which happened on June 9.  The Senate Speaker Kenneth Lusaka convened a special meeting of Senate Business Committee to discuss the matter.

However, it is on the approach of discussing and sealing the fate of the former Devolution Cabinet Secretary that the lawmakers have concerns.

They asked the Speaker Lusaka to instead consider using the plenary hearing where senators will decide whether the governor is ousted or she stays put.

“We unequivocally request the Senate Speaker and members of the House Business Committee to settle for the most democratic and representative method of adjudicating the proposed impeachment,” they stated.

“In our considered opinion, the most ideal method is the plenary option-not the select committee routes- that will involve the entire slew of senators.”

Earlier on Thursday, Waiguru was dealt a blow after the High Court threw out her application which sought to nullify her impeachment on grounds of illegality.

The besieged county boss had moved to court on Wednesday to stop her impeachment process against arguing that the MCAs had acted in contempt of court orders in voting to remove her from office.

But in his ruling, Justice Weldon Korir said that Kirinyaga Members of County Assembly did not violate court orders when they moved forward with the motion.

The MCAs had accused Waiguru of abuse of office and gross violation of the Constitution during her ouster. 23 out of 33 MCAs voted for her removal after a section of them spent a night in the precincts of the assembly as they warmed up for the motion.

By Erastus M Mulwa | 8 hours ago