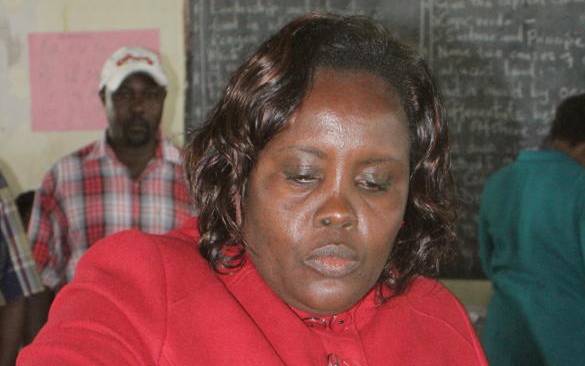 “I wish to assure everyone that I respect my Party Leader and support the party in the implementation of policies, directives, bills and I am always ready to assist the party to deliver to the people of Kenya,” she said on Sunday in a statement.

Seneta (pictured) said she will continue to play her part to make the party stronger and enable it to serve and lead the people of Kenya to greater heights of prosperity.

“As it happened, in the build-up to the party meeting convened by the party on May 12, 2020, in Nairobi, I was ready to give my support fully but I was unwell,” she said.

She said she received a letter from party National Chairperson Nelson Dzuya asking her to show cause why disciplinary action should not be taken against her for, among other reasons failure to promote and protect the interests of the party.

She argued she is loyal to the party and its leadership.

“The allegations of misconduct listed by my party do not imply guilt in the absence of a conviction or admission of guilt. I believe party disciplinary procedures are political, not judicial.”

Ms Seneta said since 2010 when she joined active politics, she has been steadfast in supporting her party leadership.

“At all times, I have stood by my party in and outside Parliament. Suffice it to say, I have always been known to tow the party lines even when matters seem to go south.”

She argued in 2013, she clinched the Kajiado County Women representative through the sponsorship of TNA.

“When TNA merged with URP, I was in the frontline in supporting the new union. In 2017, I contested for the Kajiado East Member of National Assembly and lost in the party primaries. Even after the loss, I continued supporting Jubilee and thus my nomination to the senate. In short, I have been a lifelong Jubilee member,” she explained.

She was among the five nominated senators including — Millicent Omanga, Iman Falhada Dekow, Victor Prengei and Ms Jillo that Jubilee Secretary General Raphael Tuju said the party had recommended to the disciplinary committee for expulsion.

On Friday, Ms Jillo said that she was unable to travel to Nairobi to attend the Party PG because of "unavoidable circumstances that Jubilee party is aware of."

"I am currently in Marsabit County assisting in the fight against Covid-19."

“This is a dangerous virus that we are facing and I would urge all of us to follow the directives that the government has given us. In light of the recent political ongoings, I would like to state that my loyalty lies with our Head of State and Party Leader, His Excellency President Uhuru M. Kenyatta,” she said.

She disclosed that she stands by and is guided by the President's decisions in all matters affecting the party.

“I communicated my apologies and it was duly registered during May 11, 2020, Parliamentary Group Meeting and I stand by the resolutions adopted during the meeting,"

She told off her political detractors for trying to "drive a wedge between H.E. the President and myself."

“I am aware that meetings have been going on to try and discredit me due to the grassroots support that I enjoy. I will always serve my people and God to the best of my ability,” she added.

The disciplinary committee meets Monday to address the issues.

Kanu’s new pact with ruling party, together with the increasing isolation of DP William Ruto, makes Gideon the man to watch.

By Julius Chepkwony | 54 minutes ago

By Robert Menza | 3 hours ago