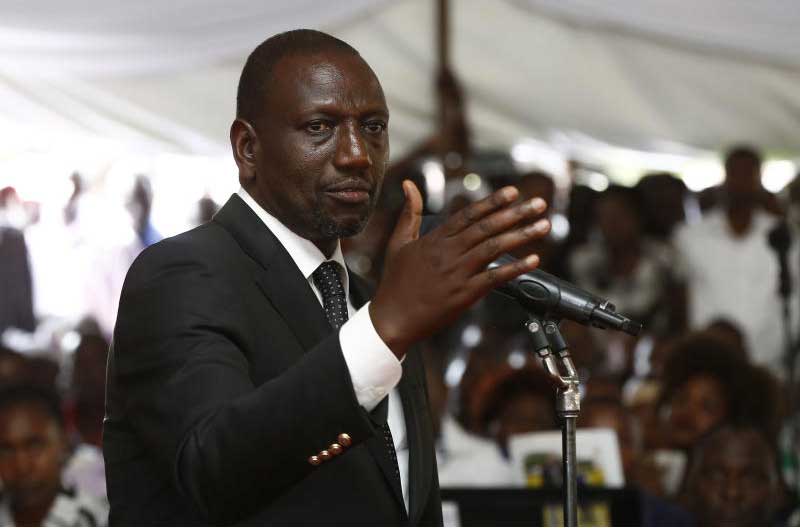 Fate continued to lay traps around Deputy President William Ruto (pictured) yesterday after six of his allies in the Senate were referred to a disciplinary committee for defying President Uhuru Kenyatta.

If this happens, it will further weaken the DP’s grip in Parliament, in a sustained onslaught by President Kenyatta’s’ allies. Senate Majority Chief Whip Irungu Kangata has written to the six, instructing them to issue their show-cause responses through him.

Another senator, Christine Zawadi, appears to have escaped the noose after writing a letter to Irungu, explaining her absence and pledging allegiance to the new leadership.

In the show-cause letter, party chairman Nelson Dzuya told the senators that while they were nominated to primarily promote and protect interests of the party, they have decided to go wayward.

“Specifically, you have acted in a manner that is disloyal to the party, advanced positions, both inside and outside the Senate, that are contrary to the positions of the Jubilee party, failed, refused and/or neglected to carry out the directives and instructions of the party as communicated and directed by party officials and its organs,” the letter said.

The letter also lists senators’ demonstration of a lack of respect to the party, as well as declining, without reasonable cause, to attend the party’s Senate PG meeting convened by the party leader on Monday and thereafter openly opposing decisions taken.

It required them to respond within the next 48 hours.

Yesterday, Secretary General Raphael Tuju confirmed the party is determined to charge the senators with insubordination and gross misconduct.

“The die is cast. Yes, the matter is with disciplinary committee which will listen to their case. They will come up lawyers and the party will present its case. Any person saying they did not get an invite is lying because they will have to prove that the mobile providers are lying,” said Mr Tuju.

“They failed to honour the invite and did not bother to send an apology,” said the SG.

It was at the State House meeting that Senate Majority leader, Kipchumba Murkomen and Whip, Susan Kihika, were shown the door, in a bigger war pitting allies of the President against those of his deputy.

The political wars are linked to the 2022 succession battle. For a better part of the day yesterday, sources told The Standard, Jubilee top officials were holed up in a meeting to explore ways of dealing with the senators.

Other sources said some lawyers were also at the meeting to seal any loopholes in the party decision.

Senator Omanga insisted that she was not invited to the meeting.

“I was not invited,” she said in a short text message. Ms Seneta declined to comment on the matter. The rest of the senators did not respond to calls or short text messages or could not be reached on their cell phones.

Nominated Jubilee senators who heeded the party invite, according to available minutes, were Alice Milgo, Isaac Mwaura and Fahriya Ali.

In her letter, Ms Zawadi said she was out of Nairobi when the meeting was called. “The reasons for my non-attendance is because of transport and logistical barriers by the government to contain Covid-19. I was out of Nairobi Metropolitan at the time of the meeting. However, I hereby endorse the resolutions of the said PG meeting,” she wrote.

Another senator who attended the PG told The Standard: “It is only courteous that we respect the President as the leader of the party that nominated us.”

To remove the senators, however, the party will need to surmount hurdles that have frustrated similar processes in the past. In 2019, Amani National Congress (ANC) failed in its bid to remove Nominated MP Godfrey Osostsi when the political parties’ disputes tribunal ruled the process was faulty.

In 2016, an attempt by Kalonzo Musyoka’s Wiper party to force out Nominated MP Robert Mutemi Mutua failed. ODM has also in the past been frustrated in efforts to discipline its members.

The tribunal said ANC had not followed due process it its attempt to remove Osotsi. It said relevant party structures did not approve the decision.

Currently, Jubilee is embroiled in disputed over party leadership. A decision to change members of the National Management Committee has been challenged by DP’s allies.

Previous article
France to force web giants to delete some content within the hour
Next article
Pregnancy made me hate my husband's voice, cooking