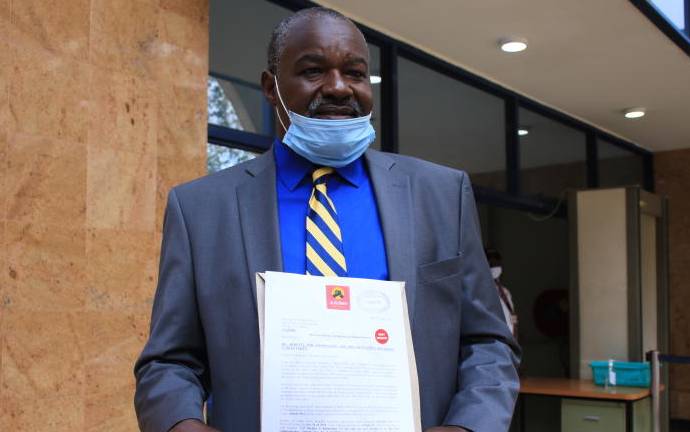 Allies of Deputy President William Ruto have challenged the validity of the post-poll Coalition Agreement between Jubilee and Kanu which signed by President Uhuru Kenyatta and Kanu leader Senator Gideon Moi.

Jubilee Party Deputy Secretary-General Caleb Kositany (pictured) has written to the Registrar of Political Parties Anne Nderitu notifying her that the post-poll agreement did not meet the party’s constitutional legal procedures.

“Please be informed that the aforementioned agreement is not compliant with Jubilee Constitution and Political Parties Act, therefore it is null and void,” Kositany notes in the letter.

Kositany argues in the letter that President Uhuru flouted the law by sanctioning the agreement since it is a reserved mandate of the National Executive Committee. He says that in any event that Jubilee has to consider forming a coalition, a Post-Poll Negotiation Panel must be constituted to conduct the discourse and arrive at what befits interests of the party.

Mr Kositany in his letter says that the negotiation panel must consist of the National Chairperson, Secretary-General and two nominees of NEC.

He further states that ratification of the coalition was a contravention of the Third Schedule of the Political Parties Act section two, which he says stipulates that the coalition agreement can only be initiated and ratified by NEC. He has asked the Registrar to ignore the agreement saying it fails to meet the legal threshold.

Additionally, Nakuru Senator Susan Kihika has written to the Senate Speaker informing him that she and three others moved to the Political Parties Dispute Tribunal to challenge the coalition agreement.

According to Kihika’s letter, the tribunal issued an order annulling the Coalition Agreement between the two parties and stopping President Uhuru, who is the party leader, and Secretary-General Raphael Tuju from forming any coalition or going ahead with the agreement.

“The Tribunal has issued an order to that effect that: In the meantime, in the interest of justice, an interim order is issued declaring that the decision or action founded on the coalition agreement purportedly signed between first and second interested parties and deposited on May 4, 2020, approved by the first respondent vide here letter 8/5/2020 is null and void and of no effect,” reads Kihika’s letter.

But on Monday night, Jubilee vice chair David Murathe while being interviewed by KTN News rubbished any illegality in signing coalition agreement with Kanu. Murathe said that the party’s constitution empowered the President to act on behalf of the NEC, which could not have a sitting due to the coronavirus pandemic.

Should Registrar of Political Parties ignore the coalition agreement, this would have a negative result on the Senate leadership changes made by Jubilee and Kanu senators in a State House Parliamentary Group meeting on Monday.