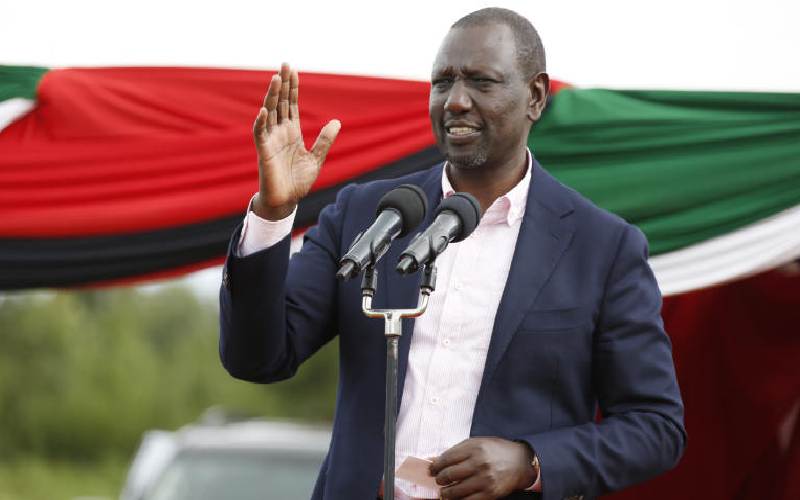 Deputy President William Ruto has accused conmen and political rejects of engineering the illegal and fraudulent party organ membership changes that have sparked internal squabbles in the ruling Jubilee party.

“This is the works of political rejects, conmen, fraudsters whose party allegiance is already elsewhere. They should give us a break and leave the Jubilee Party alone,” he tweeted on Sunday.

Ruto (pictured) was, however, quick to defend President Uhuru Kenyatta, saying he had nothing to do with the illegalities and the wrangles.

"The President and party leader of the Jubilee Party did not and cannot be party to any fraudulent and illegal changes to officials of our party," he said.

The Tangatanga wing of Jubilee led by Ruto treat the changes as an internal coup and have protested openly with the DP, Senate Majority Kikpchumba Murkomen among others protesting the move.

Murkomen wrote a protest letter to the Registrar of Political Parties Anne Nderitu and has threatened to report the matter to DCI.

“I have performed my patriotic duty as Jubilee member and a member of Jubilee’s National Executive Committee, NGC and NDC to avert fraudulent changes on the party’s national management committee (NMC). I have written a letter to the registrar and will soon report this matter to DCI,” the Elgeyo Marakwet Senator said.

Gatundu South MP Moses Kuria, another Ruto ally dismissed the changes, saying they were not sanctioned by relevant party organs and as such were illegal.

“Any changes involving the party in any way must be sanctioned by relevant party organs through a formal meeting and resolutions passed,” he said.

Jubilee Secretary General Raphael Tuju has, however, defended the changes saying they were necessary after some members of NMC got state appointments.

“The changes were effected after a number of officials landed jobs in government. The letter to make the changes was written on March 23 and noise around the reply by the registrar is unwarranted,” he said.

Jubilee former vice-chair David Murathe has told Ruto to face President Uhuru, saying Tuju is only acting on the Head of State’s orders.

“Tuju was merely acting on orders by President Uhuru as he had no powers to institute such changes independently. Let Ruto stop his social media rants and face the President himself,” he said.

“Tuju cannot make changes in the party without making reference to the party leader. These fellows are wasting time,” said Murathe.

She studied samples taken from some of the first people to become infected with the new and then-mysterious respiratory illness in China in December.