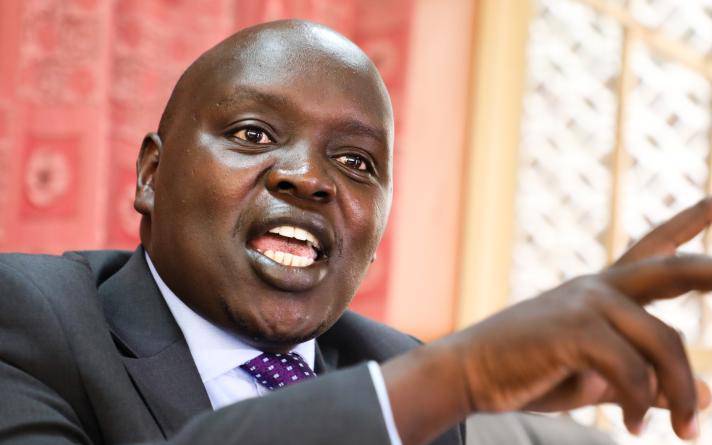 Senators are planning a bill that will shield governors from criminal and civil proceedings while in office, Nandi Senator Samson Cherargei has said.

Mr Cherargei (pictured), who spoke during an interview, said the bill is meant to change the constitution to give immunity to county chiefs against any form of prosecution.

“Just like the President and his deputy are protected from any form of prosecution while in office, governors should not be charged until when they are out of office,” said Cherargei.

The Senate's actions come on the back of a ruling by Court of Appeal judge Mumbi Ngugi who asserted that governors facing graft charges should not set foot in their offices until the cases are concluded.

Cherargei argued that the prosecution of sitting governors was killing devolution since governors, just like the president, make executive decisions of importance to counties.

“This bill should not be mistaken to mean that we condone corruption. All we want is for services at the counties to continue uninterpreted even when governors are being investigated," he said.

"Let governors be pursued and charged after they leave office. The constitutional amendment will only give immunity to the county bosses at the time they are in office.”

Cherargei also averred that the fight for governor's immunity has been motivated by the fact that some prosecutions are being mooted to settle political scored.

“We do not want a scenario where county bosses are victimised for failing to tow a certain political line," the Nandi senator said.

"The fight against corruption should not be used to settle political scores or intimidate governors.”

Cherargei stressed that the recent Court of Appeal decision to bar governors facing graft charges from accessing office is setting a dangerous precedence.

“Devolution is under attack from the Judiciary, rogue MCAs, National Treasury and the Executive,” he said.

The lawmakers described the proposal to shield governors from prosecution as ridiculous and vowed to reject it.

“This proposal is ridiculous since no one is above the law apart from the president. We shall resist the attempt in the Senate,” said Mr Sakaja.

He added that leaders should be ready to account for their actions while in the office so long as the law is followed when prosecuting them.

Mr Mutula, who is a member of the Justice, Legal Affairs and Human Rights Committee, said those who wrote the constitution had a reason to limit immunity to only the president.

“The immunity enjoyed by the president is not shared with the deputy president for a good reason," Mutula said.

Governors Mike Sonko (Nairobi), Ferdinand Waititu (Kiambu) and Moses Lenolkulal (Samburu) have all been barred from accessing office after being charged with corruption.

Mr Faki said the bill would necessitate a constitutional amendment. He said many county chiefs have overseen plunder in their devolved governments and should not be protected.

“With the hue and cry being raised over misappropriation of funds by governors, we cannot accept such a provision," said Faki.

"It will make it very difficult for the Senate to hold governors to account.”

More than 6,000 families living in Oljorai Farm could be spared eviction after a court suspended execution of a judgment canceling their title deeds.

By Anthony Gitonga and Kennedy Gachuhi | 7 hours ago

By Judah Ben-Hur and Phares Mutembei | 7 hours ago

By Anthony Gitonga and Kennedy Gachuhi | 16 hours ago