Will the BBI report be the cure for the country’s ills? 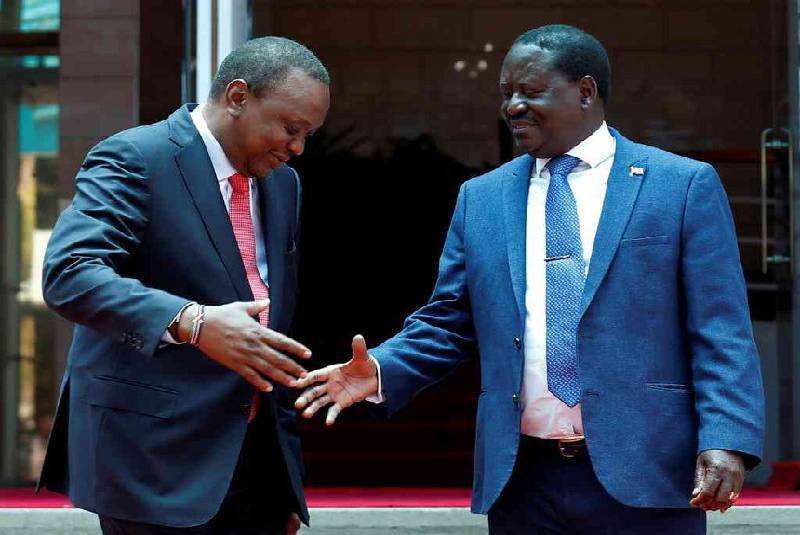 President Uhuru Kenyatta and Opposition leader Raila Odinga will today receive the Building Bridges Initiative (BBI) report, amid discontent over a document sold as the magic bullet for the country’s problems.

The two are expected to receive the report before presiding over its release to the public at the Bomas of Kenya tomorrow. Preparations were yesterday in top gear, with county commissioners tasked to send invites to MPs.

Yesterday, top government officials were making last-minute plans to ensure everybody is on board, even as some MPs allied to the Tangatanga wing of Jubilee associated with Deputy President William Ruto claimed to have been excluded in the plans.

There was serious mobilisation of participants as some Jubilee and National Super Alliance (NASA) MPs were tasked to bring in the numbers to Bomas. Raila’s Orange Democratic Movement even cancelled its planned inauguration of the party’s new headquarters today, to ensure the BBI project is given the much-needed attention.

“Due to the State event on the BBI scheduled for tomorrow (today) at State House Nairobi, our scheduled event to inaugurate the new headquarters and launch digital membership registration has been pushed to Thursday. Invited guests are reminded to carry their cards to the event,” stated a communication by the party.

But in what points to the difficult road ahead in uniting the country, some MPs allied to the deputy president have indicated they may not attend the Bomas event.

This points to deep-seated suspicions that could poison the waters even before the country embarks on the process of debating or even implementing the report’s recommendations. The process was a product of the March 9, 2018 handshake between Uhuru and Raila in the aftermath of the disputed 2017 elections.

President Uhuru and the ODM leader had promised that BBI would cure divisions in the country, and address other ills such as corruption and historical injustices. But hours to the Bomas talks, some lawmakers from Jubilee have dismissed it as a plot to ‘humiliate them’ as happened during the recent Sagana meeting, where they were denied an opportunity to speak.

The Sagana meeting that brought together Mt Kenya leaders was convened by President Kenyatta and was meant to heal the region divided along political lines. After the meeting, leaders allied to Ruto claimed that they had not been given an opportunity to speak unlike their counterparts in Kieleweke. Kieleweke faction is associated with Uhuru and supports the handshake wit Raila.

“I don’t want to suffer the humiliation that happened in Sagana,” said Tetu MP James Gichuhi.

“I’m not ready to be humiliated again like they did during the Sagana State lodge meeting where I was locked out in a tent... Before even that report is made public, there were clear signs of what it was intended to do,” said Bahati MP Kimani Ngunjiri.

He added: “You can never purport to unite the country yet in the same breath, speak about a tsunami,” Ngunjiri said”, in reference to Raila’s statement last week.

“I am not aware of any invitation and would not like to make any comments. What I am aware is that MPs at constituency level have been asked to pick people to attend the Bomas meeting…my priority at the moment is on the tragedy in West Pokot and how families can be assisted,” said Senate Majority Leader Kipchumba Murkomen.

“I have not received any invitation nor has anyone from Belgut been invited,” said Belgut MP, Nelson Koech.

Kapseret MP Oscar Sudi also said he would not attend the Bomas meeting despite getting an invite. The MPs’ sentiments underline the rebellion that has consistently fuelled divisions in the Jubilee party and the difficult road ahead for the president and Raila on selling the report’s objectives.

Poisoning the atmosphere are perceptions that BBI is designed to help ‘some leaders get to power through the backdoor’, while locking out the DP from the presidency in 2022.

The suspicions revolve around speculation that the BBI team may recommend change in the structure of government and create more positions in the executive. It is expected that some of proposals in the report could require administrative action, while others may end up in parliament or a referendum.

Amid the current divisions there are questions on whether the two leaders will manage to rally their troops in a divided House to push through proposed changes. Having failed to convene a Jubilee Parliamentary Group meeting for the past two years, it remains to be seen how Uhuru will convince rebels in his party to support the proposals in parliament should the need arise.

Should some of the changes require a referendum, Uhuru and Raila will have a tough task to ensure the document does not become a poisoned chalice by dividing the county even further.

Some MPs have also taken issue with the manner in which views were collected in putting together the BBI report, amid claims that the process was not inclusive.

“They have decided to pick people to attend the Bomas meeting using county commissioners. It can only mean that they want people who will sing their tunes. It is the same method they used when BBI was collecting views,” said Aldai MP, Cornelly Serem, an ally of Ruto.

The report is also expected to address historical injustices, some of which were raised in the Truth, Justice and Reconciliation Commission (TJRC) report that has been gathering dust.

Having failed to implement the TJRC report for the past seven years, there are questions on whether the president will have the courage to follow through any far-reaching recommendations made by the 14 member BBI team.

The team was yesterday making final preparations in readiness for handing over the report to the president and the former prime minister.

“We have delivered the baby and the task of organising the Bomas meeting is now with the county commissioner of Nairobi,” said BBI Secretariat CEO Stephen Karau yesterday.

“We were given the job of collecting views and that we have done that,” said a member of the task force, Prof Morompi Ronkei.

Head of the Anglican Church in Kenya Archbishop Jackson Sapit said there is need to support a document that has the interests of the public at heart.

“The report should be representative of all people of Kenya where no one feels excluded. If political positions are shared across the nation, then we will have a country that all of us will be proud to belong to. However, it needs to be more than just a political arrangement. We need to see how the ordinary mwananchi will benefit in terms of employment and other pressing issues...” he said.

“We expect the release of the report to mark the beginning of a genuine dialogue. This country has to address the issue of exclusion because all our problems go back to exclusion,” he said. Central Organisation of Trade Union Secretary General Francis Atwoli sees a bright future for the BBI report.

“BBI will be endorsed by all Kenyans early in the morning and Kenyans should not worry about the report because any contentious issues will be ironed out before the draft is voted in a referendum,” he  said.

Others like Emmanuel Ng’etuny, National Convenor BBI Volunteers, want the public to read the report.

“For sometime now, we have witnessed proliferation of loose political formations that have come out to either oppose or support the BBI. They are preempting the debate through incessant bickering from a point of no knowledge, yet the contents of the report have not been made public,” said Mr Ng’etuny.

In the video, an angry man is seen physically assaulting a female security guard in what seemed like an argument that turned sour